“Lokmat founder and veteran freedom fighter Jawaharlal Darda considered Lokmat as a family and wanted every member of this family to grow along with the institution,’’ said Chairman of Lokmat Editorial Board and former Rajya Sabha MP Vijay Darda.

He was speaking after unveiling a bust of Jawaharlal Darda on the Lokmat premises here on Saturday.

Vijay Darda further said, “Babuji was a shining example of sacrifice, penance and humanity. He not only founded Lokmat but also gave direction to Maharashtra. His message of humanity will always keep us inspiring. Babuji made a great contribution in the industrialization of Maharashtra. He introduced new textile policy bringing about the change in the sector.’’

See big dreams, realise them was his message: Rajendra Darda

Editor-in-Chief of Lokmat Rajendra Darda went down memory lane. “This was the same place where Babuji had performed Bhumipujan of Lokmat building 40 years ago. Today, we are unveiling his bust here. Babuji was a person who gave you energy. See big dreams and work for realising them, was his message. It was due to Babuji’s foresight that Lokmat came to Aurangabad. He mooted the concept of Lokmat Family,” said Rajendra Darda. Architect Rajendra Nadkarni was felicitated by Vijay Darda on the occasion. 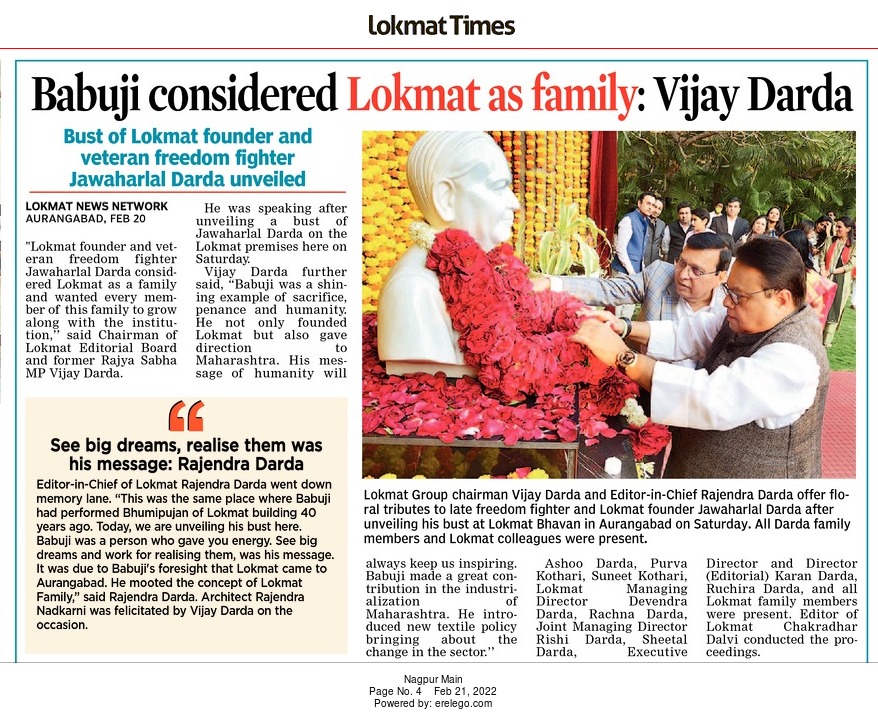