It may sound like a case of told you so, when some calamity strikes and a friend tells you that he had warned about it beforehand, and you had dismissed his caution with derision. You are left with no option but to wring your hands, and live through the situation with a hope that you would emerge out of it with minimum damage. But in the case of the falling rupee, four months ago a business friend of mine had actually predicted its fall, and his ominous warnings had disturbed me. He too had made the grim prediction that it would touch Rs 70 to a dollar, and the same warnings have now been repeated by several analysts.

I agree with the finance minister P Chidambaram that when our economy gets globalised, it cannot remain insulated from the global shocks. If we have reaped the benefits of a neo-liberal regime in terms of the opportunities for growth, it is axiomatic that the health of the rupee would be inter-linked to the rest of the world. Now, there may be some soothing indicators that this decline of the rupee vis-a-vis the dollar is also accompanied by the fall of other currencies. Now, this may give us a feeling that we are not alone in this storm, but it does not take away the storm. Similarly, the finance minister used the expression that there is no need for ‘unwarranted pessimism’, but by his own words he has accepted the need for ‘warranted pessimism’, and for citizens that is not a comforting thought.

The other most important element about the economy is that you do not live on your past laurels. As ordinary investors in mutual funds, we are all warned with a phrase that, ‘Past performance is not a guarantee of future earnings’. So, the claim UPA has had an average high growth rate for the nine out of its 10 years, is a good political talking point, but for the current situation it does not go beyond a statement of fact. In the sense, that it offers little hope, unless accompanied by actions that make a real impact.

But the unmistakable reality is that we have not come to this pass in a single day. For instance, if our bill for imports of oil is rising, it is not just due to the rising price of oil or the falling value of rupee. The primary reason is that we have not taken enough steps to dramatically increase domestic oil production. Or look for alternative fuels like developing a technology for electric cars with battery charging points on roads and highways. Similarly, our domestic coal production has not kept up with the needs of the power sector, and in spite of having some of the largest coal reserves in Asia, we have been forced to import coal. Our domestic gold production has also not grown, and given the propensity for this yellow metal to be treated as the most important security when, God forbid, we fall on bad days, its demand has been increasing as other investment instruments have become less than dependable for us.

I could go on, but the primary point is that the economy has not been handled in a creative way. We have accepted that we have been hamstrung by situations that are ‘simply beyond our control’. Well, I do concede that some situations are really beyond our control, but I do not accept the resultant helplessness. For instance, in three sectors —telecom, coal and iron ore exports — the situation that has arisen out of the reports of corruption and the consequent litigation could have been handled creatively without the collateral damage to the economy. Similarly, the production delays that take place because projects do not get the environmental and forest clearances are surely an avoidable situation. For me, the policy paralysis that is talked of by the media and the critics is not the inability to take decisions or get the bipartisan support of the polity for crucial Bills in the parliament.

For me, the policy paralysis lies in not getting the sanctioned projects off the ground, and making them contribute to the economy. I view the other kinds of delay as the cost of the parliamentary democracy. For me, it is given that the Opposition parties shall try every trick to delay the passage of all Bills. The lip service it pays to people’s welfare is a part of the rampant political hypocrisy that ails the wider system.

We are an attractive investment destination as the sheer size of our market makes it a lucrative proposition. But then let us accept that we have not remained an attractive place to do business. It was not for nothing that our great leader Indira Gandhi had once very tellingly referred to it as a ‘global phenomena’. Now, a global problem cannot have a local fix. Having embarked on a neo-liberal regime, we could not expected an archaic policy like ‘first-cum-first serve’ to meet the expectations of competitive transparency. The clever babu who devised this idea, and the ministers who agreed to live with it for years, have done one of the greatest disservice to the national economy. Is a scarce resource like spectrum worth billions of dollars some kind of a freebie that can be offered on a ‘first-come-first-serve’ basis?

This, of course, is not the time to crib about the past. The past is being reminded only to ensure that we do not repeat our mistakes. I do not agree with the critics who argue that there is no time left for the government before the polls. When it comes to national interest, there is nothing like a period before the elections and after the polls. Serving the national interest is a continuous process. All right decisions must be taken with a confidence, and that we shall come back to power, and if that does not happen, then it is for the next government to decide.

Similarly, I do not agree with those who blame the welfare schemes like MNREGA or proposed food security Bill or farm loan waiver for the woes of the economy. I do agree that welfare schemes should also create tangible assets and all leakages should be plugged, but then by no stretch of imagination can we argue that only the corporate sector has a right to stimuli, and the poor shall not get a hand that lifts them up. This is not a matter of political correctness, but it is the imperative of natural justice. For me, the woes of the economy are a reflection of the way we handle our rupee. That we have not been able to prevent the huge influx of fake notes to me is a sign that we do not respect our own currency. So, why should we be surprised when the rupee falls? 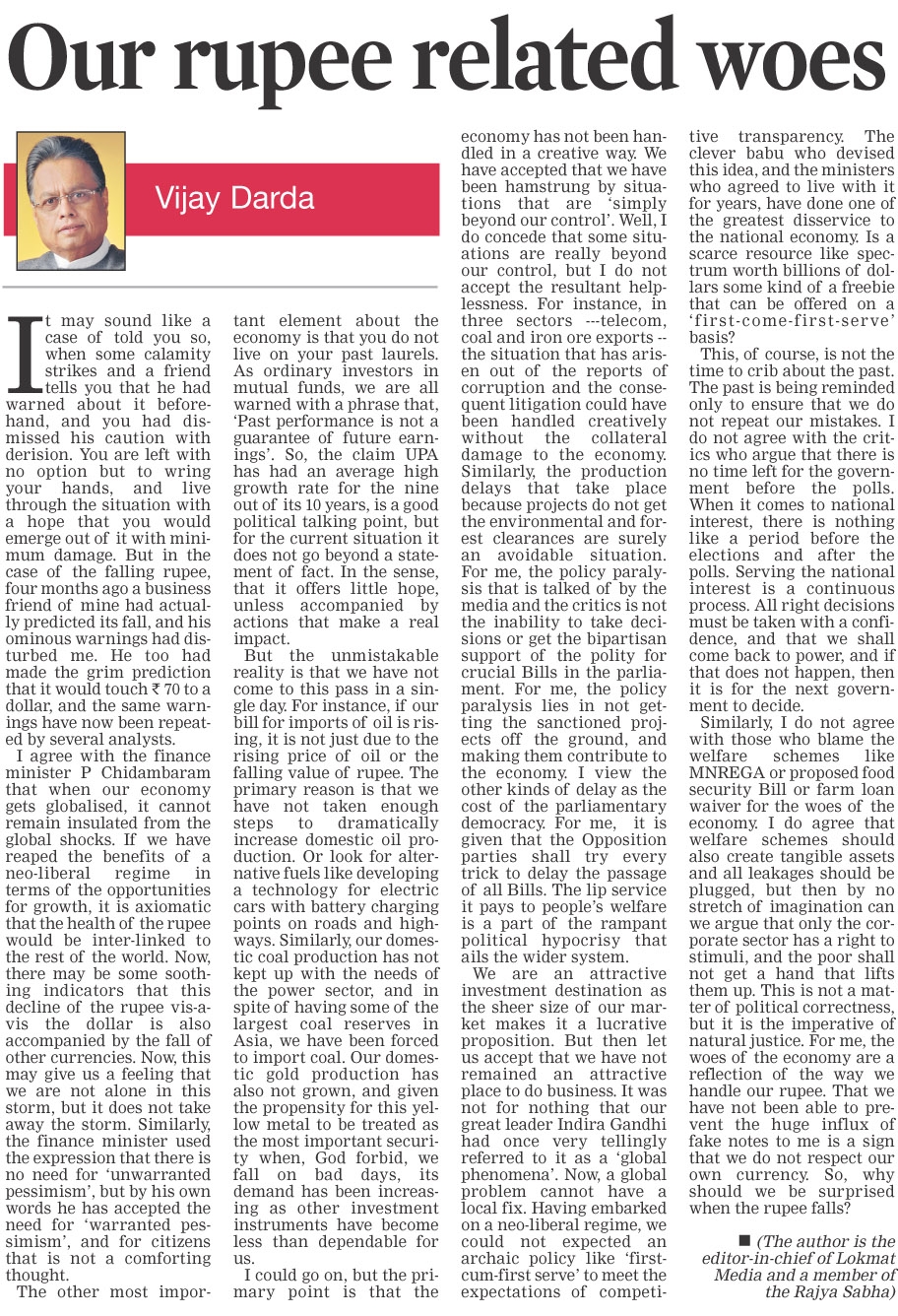 What’s this crisis after all?