Though second most populated at the moment, India may soon become most populous country in the world

It is really surprising that the country which started the family planning programme in 1952 has failed to curb the population graph and is now very close to becoming the most populated country in the world. At present, China with a population of about 142 crores, occupies the first place in the world and India with an estimated population of 135 crores ranks second. Our population growth rate has been more than 17.5 per cent in the last decade. Although this rate is deemed to be lower as compared to the earlier years, it is necessary to reduce this pace further.

India’s population at the time of independence was just around 33 crores. However, the population growth has galloped by leaps and bounds in the last 72 years adding more than 100 crores in all these years. It is estimated that we will leave China behind in the next decade because the population of China has been slowing down for years. In 1979, China strictly enforced the one child per couple norm. This policy has been withdrawn recently. Even after this, the pace of population growth has been extremely low. On the contrary, every day about 50,000 babies are added to our population. Experts feel that by 2050 India will cross the figure of 160 crores.

Just think from where will we gather enough resources for such a large population. Talking about the current figures, the world population is a little more than 770 crores. Of these, 17.5 per cent of the population lives in India, while we only have 2.4 per cent of the world’s land. Water resources are only 4 per cent. Experts believe that given the increasing pace of population growth, our food production should increase by 54 lakh tonnes every year, but we are able to increase the production by only 40 lakh tonnes on an average. Just think how will we be able to feed our people in 2050? Where will they live? Apart from this, 20 per cent of sick population of the world including those suffering from various malignancies will be in India. It is obvious that if the population increases, it will affect our pace of development. Where will employment be created for so many people? How will they be able to maintain themselves?

It is therefore, very important that we focus on curbing the growth of population. The fact is that the family planning programme started in 1952 is almost dead. Think of it in terms of statistics. The infant mortality rate in 1990 was 129 per 1,000 children, which decreased to 39 in 2017. That is, the death rate of children has come down as expected. This information did not reach the people properly, so there was doubt among the illiterate and the poor sections about the death rate of children and people did not even consider reducing the number of children. Apart from this, gender based discrimination is so much etched in our mind that everyone wants to have a son! It is also mentioned in the economic survey of 2019-20 that it is the desire for a son that added 2.1 crore more babies to the population of the country.

India’s first Prime Minister Jawaharlal Nehru had correctly predicted that population would one day become a problem. The figures were also testifying at that time. In 1901, India’s population was around 23.83 crores, which by the time of 1951 had crossed 36 crores. Sensing this danger, he started the family planning programme in India in 1952. Before this, no country had started any such programme. It was a difficult task in a country like India, but Pandit Nehru accepted this challenge. In the later years of Nehru, this department continued to work, but attention was not paid to the adoption of scientific method to halt the growth of population. Not much effort was made to convince the masses to plan their families either. Sanjay Gandhi enforced the two child norm ‘Hum Do Hamare Do’ in such an aggressive way that almost a rebellion-like situation arose in the country.

Then religion came in the way and one community started accusing the other community of producing too many children and thereby outnumbering them in the country! This kind of attitude of the people struck a fatal blow to the family planning campaign. Then the leaders stopped talking about it altogether! Now Prime Minister Narendra Modi has advocated the need for small family and to curb the population. The government has brought the Population Regulation Bill 2019, under which a population control law will be enacted, considering two children as ideal. Hope this country will overcome population growth soon! At the same time, the government should provide good education along with food and shelter for the upbringing of our population. If people do not have work, the crime rate will increase as well. If you have to stay away from these problems, brakes will have to be applied on the growth of the population.

Everyone is aware that the main reason for our problems is the burgeoning population, but our politicians have avoided talking about it. Prime Minister Narendra Modi has raised this burning issue. If we want to progress, population explosion must be curbed at any cost. 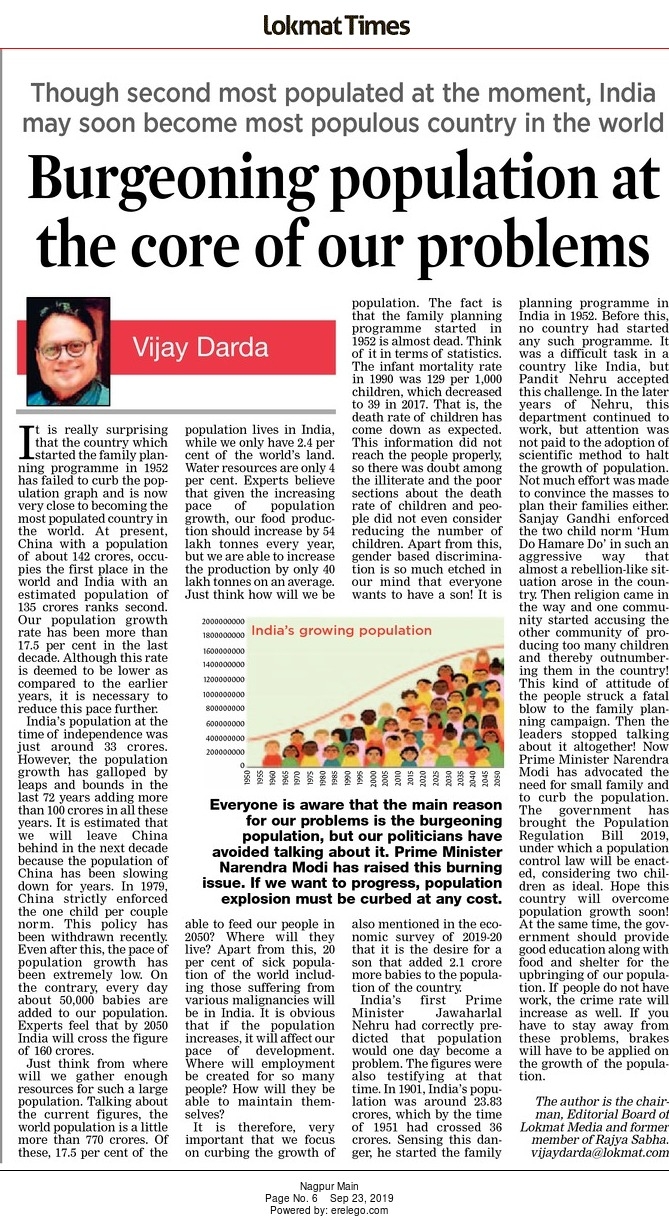