Coronavirus has landed the whole world in crisis, but India faces a very serious threat!

Although China, where coronavirus originated, has almost overcome this deadly virus, it is wreaking havoc in other countries across the world. The situation in Italy, Iran and Spain is worst. Things are no better in other countries from Europe to America. This is the condition of the countries where people do not interact much. They are equipped with modern medical facilities. Despite this, they are unable to control coronavirus, so the question is, where do we stand?

We have China for comparison because in terms of population, we are almost the same, but the area of China is three times bigger than ours. When we look at the density of population, our situation seems more serious. India’s population is more than 138 crore while that of China is 143 crore. If we calculate, population density in China comes to 147 people per square kilometre whereas in India, it is more than 400! China completely locked down Wuhan as soon as coronavirus was discovered and sanitised it. Are we able to do this? Do we have so many facilities and requisite resources?

There is no doubt that our doctors, nurses, ward boys, paramedical staff and our officers are not only competent but also fully dedicated to their job. The way they are working under the present circumstances is worthy of highest commendation. We also have a health minister like Rajesh Tope in Maharashtra who, despite his mother’s hospitalisation, is monitoring the healthcare facilities day and night in the war against coronavirus. I also praise Maharashtra chief minister Uddhav Thackeray for exercising maximum vigilance and taking immediate decision to curb the spread of the deadly virus.

I salute Pune’s divisional commissioner Deepak Mhaisekar, collector Naval Kishore Ram and Yavatmal collector M Devender Singh, who galvanised themselves into action with the news of coronavirus and left no stone unturned to control the situation. I also salute the journalists of electronic and print media, hawkers who carry newspapers to your homes and all the media employees who are working fearlessly in this hour of crisis so that authentic news reaches the people.

But the question is, in case the stage of corona continues to rise and the virus reaches villages through small towns, do we have enough resources to handle the situation? I suggest that the villagers should lockdown their villages to prevent the corona from spreading. However, even in cities, the capacity needed to handle the situation is not sufficient. Let me tell you that the density of population in Mumbai is so much that as many as 21000 people live per square kilometre! But I will discuss healthcare services sometime later.

Right now I am shocked to read the news carried by an international news agency that India has the capacity to conduct 8000 tests per day but compared to capacity, fewer tests are being carried out. This report is dated March 18. By that day, only 11500 tests were conducted and by March 22, only 17000 tests have been conducted. The number of tests per day may have increased a bit, but it is not enough. South Korea, Taiwan, Singapore and Japan are very small countries compared to ours but millions of tests have been conducted in those countries. South Korea almost controlled the corona by carrying out tests. Even those who do not have symptoms of the disease are being tested. Of course, people there have extended their cooperation too in breaking the chain of virus.

Significantly, our Prime Minister Narendra Modi has spoken about restraint and determination. If the responsibility of the government is to arrange for a large number of investigations, it is the responsibility of the people not to step out of house unnecessarily. If you have a common cough, cold and fever, contact the doctor immediately and keep yourselves away from others. We are natives of ‘Devbhoomi’ and do many things believing in the almighty. But we should hope that people will understand the seriousness of the situation and follow in toto the advices of Prime Minister Narendra Modi and chief minister Uddhav Thackeray. The success of ‘Janata Curfew’ is a good sign too.

It will take some time, but we will definitely win this war against corona. But after that, a second war will stare us in the face which corona will leave behind. And that will be the economic crisis, which India is already in. So the challenge is even more serious. Intellectual industrialist Anand Mahindra has rightly said that we will win the war against corona but winning recession after that will be a great challenge.

I would like to say two more things. One is that in cities which have been locked down, the number of people who depend on daily wages is very large. It is also necessary to consider the industries which are getting destroyed due to corona crisis. And the second thing is that we have to gear ourselves up to deal with every kind of crisis, that is focus on disaster management. Last year in Odisha at the time of cyclonic storm Fani, the disaster management machinery performed so well that the damage was almost non-existent. Today the whole world is studying that disaster management concept. We will also have to prepare the strategy on that line to fight the present biological crisis.

However, don’t be afraid of coronavirus. Take care of yourself and maintain cleanliness around you. We will definitely win this war!

This is the moment of crisis for the whole world. Coronavirus has affected more than 150 countries. It is not known how many deaths and destruction it will cause, but for a densely populated country like India, it is certainly a matter of serious concern. We all have to discharge our obligation with dedication. 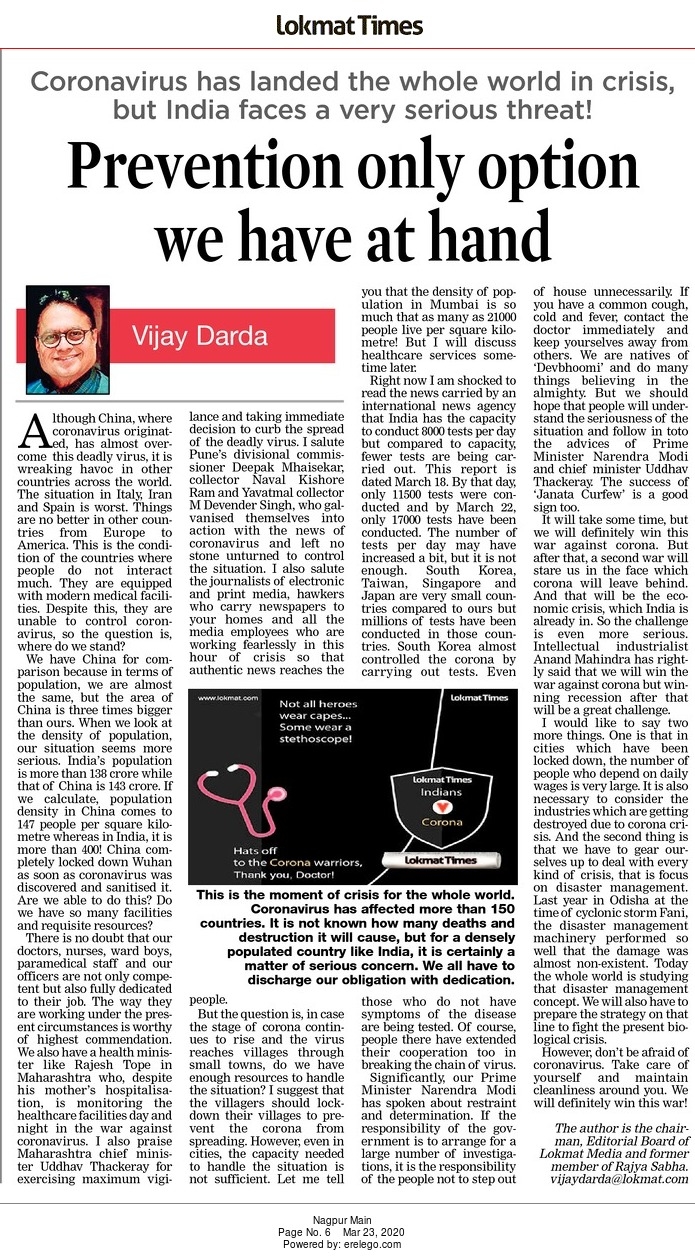 Why are our teenagers taking to crime?