Cricket is not just a game, it’s like a soul… ‘Sorry Mr Darda, India lost!’

The Austrian village where I am currently staying has a population of just 1,900. The population of this beautiful country of Central Europe is way too small. The population might be around 88 lakh. Well, on the day that India and New Zealand were facing each other in the semi-final of the World Cup, like all the Indians in the world, I had kept an eye on this important match too. India’s defeat obviously made me sad, moreso because there was no apprehension about this defeat.

The next day England defeated Australia and reached the finals. Shortly after this match, I met a woman in this village. She said, “Sorry Mr Darda, India lost!” I was a little surprised that the Austrian people follow the Indian game. I asked her: “Do you follow cricket?” She nodded and said she was British and felt bad that India suffered defeat in the World Cup Cricket semi-finals. I asked her: “Why you are feeling bad. Your country has reached the finals after 27 years. You should be happy!” She said the excitement of playing with Team India would have been quite different! (England won the World Cup in a Super Over nail-biting final defeating New Zealand.)

She said the sportsmanship of Indians is very unique. This is not the case in any other country’s team. Your Dhoni is so cute, how wonderful he is, how effective he is and she started laughing. I really enjoyed listening to the praise of India. I asked if she was also interested in India’s politics. She shook her head and said, “I am neither interested in my country’s politics nor in your country’s politics!

I think this sport is not just a game. When India and Pakistan were playing, Indians from all over the world were watching the match with a bated breath. Cricket becomes our spiritual power in such matches. So, when there is such an attachment and the Indian team is playing so well, no one anticipated that India would lose to New Zealand. But unfortunately this happened. Had our selectors found a strong batsman for batting at number four, we would not have been forced to see this day today. In almost every team of the world, their superb players bat at number four but in our country only experiment continues. That is why when the first four wickets fell cheaply, a defeat was looming large! If any player comments on this, it is natural but if Prime Minister Narendra Modi, Rahul Gandhi, Lata Mangeshkar make a comment, it is obvious that it was not just a match.

I believe the excitement for the semi-final match in our country was far more than the one witnessed after the NDA won 350 seats in the Lok Sabha elections. The defeat in this match has obviously broken hearts. Nonetheless, sportsmanship is essential in every sphere of life. Building a country, creating a society, running a household, sportsmanship is needed everywhere. Growth is not possible in any field without playing the game. I remember that on the day England and India had a match, Pakistan was also praying for India’s win. This sportsmanship is amazing. It seems that sportsman spirit is the only thing that can unite all the nations. When India lost to New Zealand, I received a call from a Pakistani friend and he too expressed pain over India’s defeat.

Now a little bit about this little village where facilities are so many that you will be surprised. There are playgrounds, there is a track to run, a fantastic gym, gymnastics and hiking facilities. Everything exemplifies talent and quality fit for professional players who can also play there. There is a big lake. The water is so clear that you can see through into it. People swim in extremely cold water. Simply put, all are playing. The village has the best music centre. So large that 50 people can sing together. There are excellent schools, excellent hospitals, good gardens and a nice church in the village. The whole village is decorated with flowers. The parking facility is wonderful. Everything is done in a planned way. I asked who builds it all! People said there is a management committee of the village and a local government, and they make and maintain it. I am constantly thinking whether our village will ever be able to attain this enviable position.

The behaviour of the people here impressed me greatly. I asked a person as to how come they treat people with such warmth? He said with great ease: “Had our behaviour not been good, how you would have come here?” The man was originally German-speaking, but learnt English so that he can communicate easily with the people coming here from outside.

I encountered a young man who wraps bandage on the hands of boxers. Boxing gloves are worn only after this bandage is wrapped. He bandages world class players and treats them too. He told me: “I’ve visited India. India is poor but is very cultured. I went to places like Banaras, Rishikesh and Agra. You have a great culture.” It felt great listening to him. And yes, I’d like to share another piece of information that there is no bottled drinking water here. People said the water comes here straight from the Alps mountain range. Absolutely pure and full of minerals.

I am currently in a small village in Austria and I realised that India’s defeat in the semi-finals of the World Cup not only disappointed the Indians settled abroad but also broke the hearts of those who are fans of the sporting spirit of Indian players. 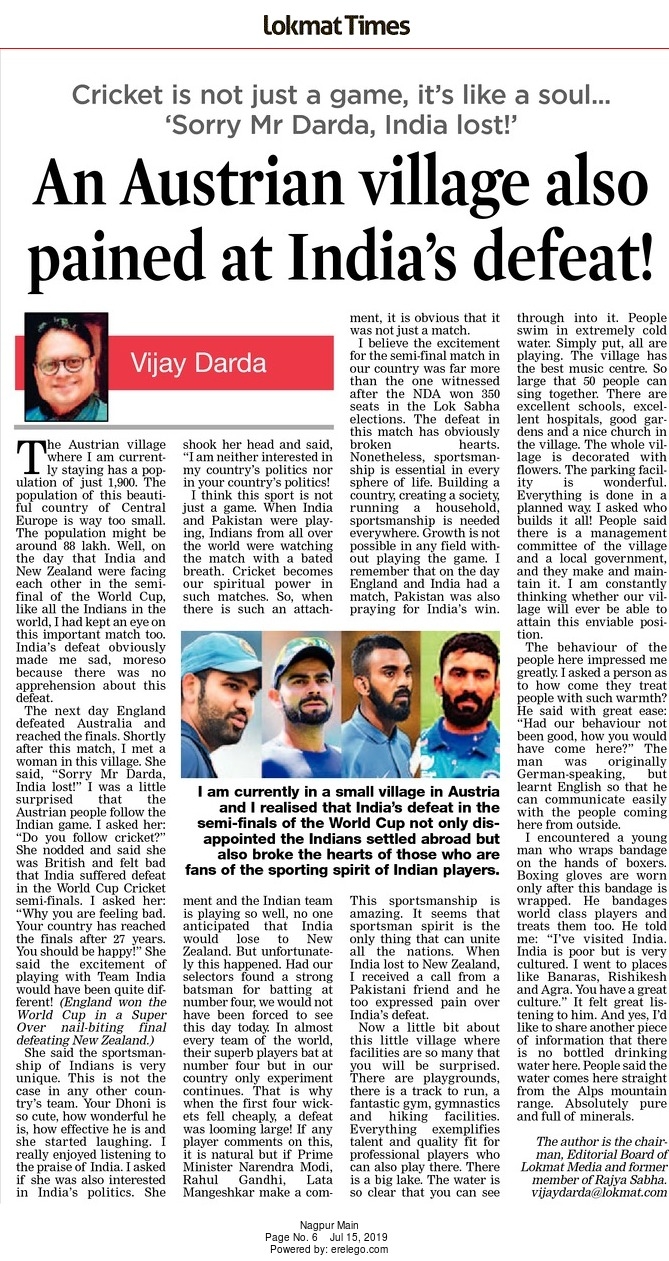