After the UPA-II got power in 2009, the common perception in political circles was that at some point of time during the course of the next five years the Congress leadership in government would pass from the hands of Prime Minister Dr Manmohan Singh to Rahul Gandhi. This was based on the premise that Dr. Singh would not be in the reckoning for a third term, and then it would make sense for an incumbent to seek re-election.

So, Rahul should be this incumbent. But then the powers that be had other ideas. Call it more than abundant caution or whatever you may, this approach created a situation where pitted against a strong prime ministerial candidate of the BJP, from the Congress side there was the track record of a Prime Minister who had ruled himself out for another term, and a potential Prime Minister who did not move in when he had all the opportunity to do so.

Besides, Rahul’s own eloquent comment — ‘power is poison’ — was surely made in the positive sense to delink the unquenchable thirst of power from the essence of politics as public service, but the perception that emerged was that he is a reluctant politician.

But then the kind of defeat that has been suffered by the Congress in coming down from 206 in 2009 to 44 five years later simply cannot be the product of one or two episodic factors. It is the outcome of a series of self-goals that the party and the government scored against themselves.

Such a drubbing can come only if the party refuses to learn from its earlier mistakes and the trajectory of these errors of omissions and commissions is too well known to bear any recall.

Suffice to say that this self-destruct tendency continued even when the polling was over for at least five phases. Two senior ministers proclaimed very boldly that the government would appoint a judge to probe the snoopgate scandal before the date of counting — May 16. It did not require much experience or expertise to predict that this was an ill-fated step that would reek of political vendetta and raise all sorts of uncomfortable questions. The government got all the bad press, and then the move was given an indecent burial.

So, whether it was the 2G telecom scandal, the Coalgate, the Adarsh case or the handling of the anti-corruption movement headed by Anna Hazare and Baba Ramdev and the associated Lokpal Bill, the inordinate delay in creation of Telangana and ignoring the just demand of separate Vidarbha, the management of the economy, specially price rise and the question of policy paralysis every chapter in this saga suffers from the same malaise of inflicting self-goals. Indeed, the high profile act of Rahul Gandhi advocating that the ordinance to protect the tainted MPs be consigned to the dustbin also had all the features of a self-goal. The same question haunts all — Why did the Congress do this when better options were easily available?

The cumulative impact of all the failures was that both the Congress party and the UPA-II government created a vicious cycle of credibility gap and an increasingly negative perception. So, the prime minister appeared weak and indecisive, and the party leadership seemed incapable of fighting the political battle. This is the core of what is now being referred to as communication failure in the discussions that are now taking place after the defeat.

Furthermore, the way Modi mobilised the younger generation, the business community and the women voters in favour of BJP was bound to pay rich dividends. What added strength to Modi’s campaign was the active participation of BJP youth wing, RSS cadres and the women workers of the party. On the other hand, the Youth Congress and Mahila Congress were nowhere in the scene.

As if these negatives had not been enough to add to the miseries and losses of the Congress party, there was the process of alienation of just about every section of the society. Never before have we witnessed a situation in which all the influential sections — the corporates, the media, and the bureaucracy — have been so hostile to the Congress. Of course, the poor and the middle classes were already feeling neglected, and wanted a change. It was as if all these sections were simply waiting to get rid of a Congress government, and the party had more or less reconciled itself to treat this as a fait accompli. The party seems to have lowered down its goals in this election to something like a respectable defeat, and is only shocked by the extent of the loss.

But there is an element of strategy as well. The BJP has got more than six times the number of seats — 282 at 31 percent vote share as against Congress’s 44 at slightly over 19 per cent. One reason of course is the winner takes all aspect of our electoral system, but then the element of using a strategy that converts vote share into seats cannot be missed. Better planning and the realisation that an effective anti-BJP thrust at the constituency level could certainly have mitigated the losses. However, with divisions as we now know in Team Rahul itself (as a prominent member Milind Deora has revealed) may be the expectations of a better result were unrealistic in the first place.

Make no mistake, the defeat irrespective of its magnitude does not take away anything from the leadership qualities of both the Congress president Sonia Gandhi and her son Rahul. They retain their credibility with the masses and are tall leaders in every respect. Together with the third player of this core team – Priyanka — they can lead the Congress once again on the path to victory. But for Congress men to keep scoring self-goals, and keep hoping that redemption would come through the hard work and sacrifice of the Gandhi family can hardly be seen as a recipe for success. This is the facet that has to change if the Congress wants a reversal of its fortunes. 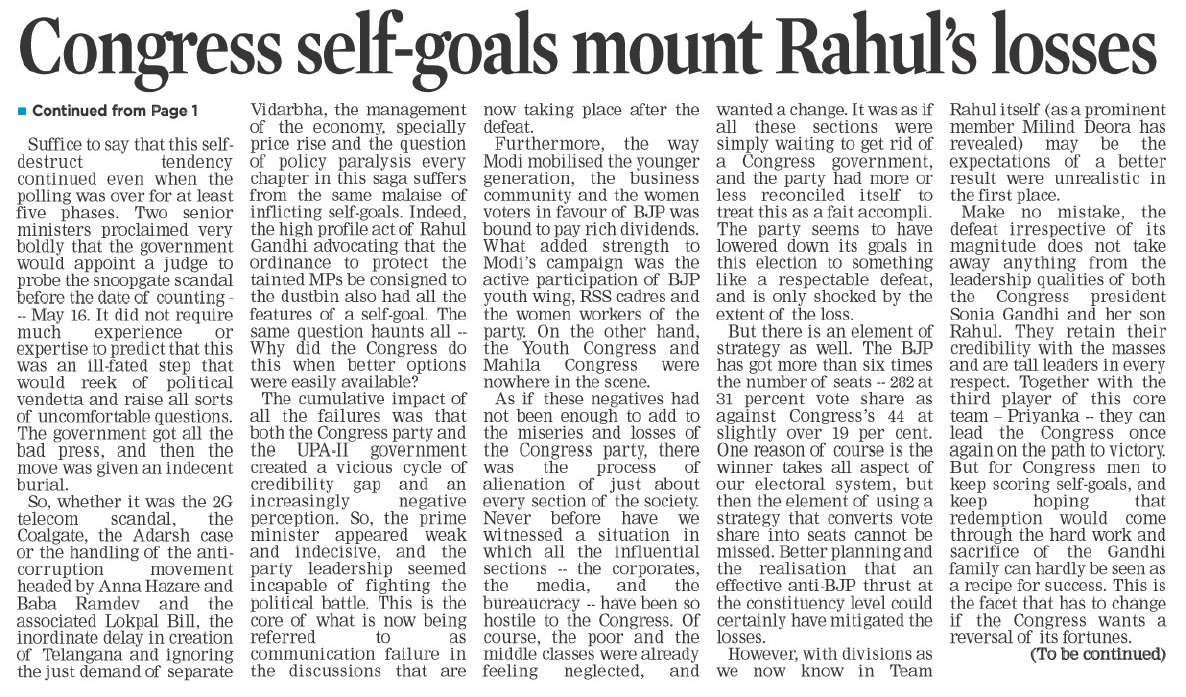