Lokmat has built hostels for children of martyred soldiers in Nagpur, Aurangabad, Latur and Solapur

New Delhi, June 29: The chairman of editorial board of Lokmat Media and former member of Rajya Sabha Vijay Darda on Tuesday presented a cheque for Rs 71 lakh to defence minister Rajnath Singh and Chief of Army Staff General Manoj Pande on behalf of Lokmat Foundation for the construction of houses for the soldiers guarding the war memorial in Kargil.

On this occasion, Lt Gen P S Shekhawat was also present. Darda called on the defence minister and the CoAS at the ministry of defence, South Block, Delhi.

In fact, Kargil War Memorial was constructed in Kargil in 2004 on the national highway NH-1D from Srinagar to Leh after the Kargil war victory in 1999. Since this place is very close to the Pakistan border and there is a strong possibility of a terror attack here, an Army contingent has been deployed for its security.

To save these soldiers from freezing cold of minus 42 degree Celsius, pucca houses were needed and its cost was estimated at Rs 71 lakh. This need of the Army was fulfilled by the Kargil Martyrs’ Relief Fund of Lokmat. The construction of the houses is going on in full swing. It will be inaugurated on the Kargil Vijay Diwas on July 26. Darda has also been invited to this ceremony.

Darda also apprised the defence minister of the assistance provided to the families of the martyrs of the Kargil war in 1999 by the Lokmat Media Group and the amount given to the injured. He told the defence minister that the Lokmat Media Group had till date collected Rs 2.58 crore in the Kargil Martyrs’ Relief Fund since 1999. Out of this, Rs 1.08 lakh each was given to the legal heirs of 41 martyred jawans and big amounts were distributed among 39 injured jawans. Around Rs 48.28 lakh was spent under this head.

Besides, hostels were constructed for the children of martyred soldiers in Nagpur at a cost of Rs 38.05 lakh and in Aurangabad at a cost of Rs 45.91 lakh. Similar hostels were built in Latur and Solapur at a cost of Rs 29.95 lakh and Rs 24.5 lakh respectively. The Lokmat Media Group spent a total of Rs 13,841,000 for this purpose. Darda donated the remaining amount of Rs 71 lakh to the Kargil War Memorial Fund of the Army Welfare Fund on Tuesday. Thus, the Lokmat Media Group has so far spent Rs 2.58 crore for this cause. The entire amount collected was deposited in a separate account at the Sitabuldi Branch of Bank of India at Nagpur. Maintaining transparency, the amount was not used for any other purpose. The financial assistance was given in the form of FDR to the families of martyred jawans through account payee cheques which were transferred to the accounts of their legal heirs after maturity.

An amount of Rs 48.28 lakh was spent on financial assistance to the families of the martyred soldiers and the injured, Rs 13,841,000 were spent on construction of hostels for the children of the soldiers and the amount of Rs 71 lakh handed over on Tuesday together with interest comes to a total of Rs 2.58 crore.

The space dedicated in the newspapers of Lokmat Media Group to collect funds is worth lakhs. The members of the Lokmat family also devoted several thousand hours to this virtuous work. 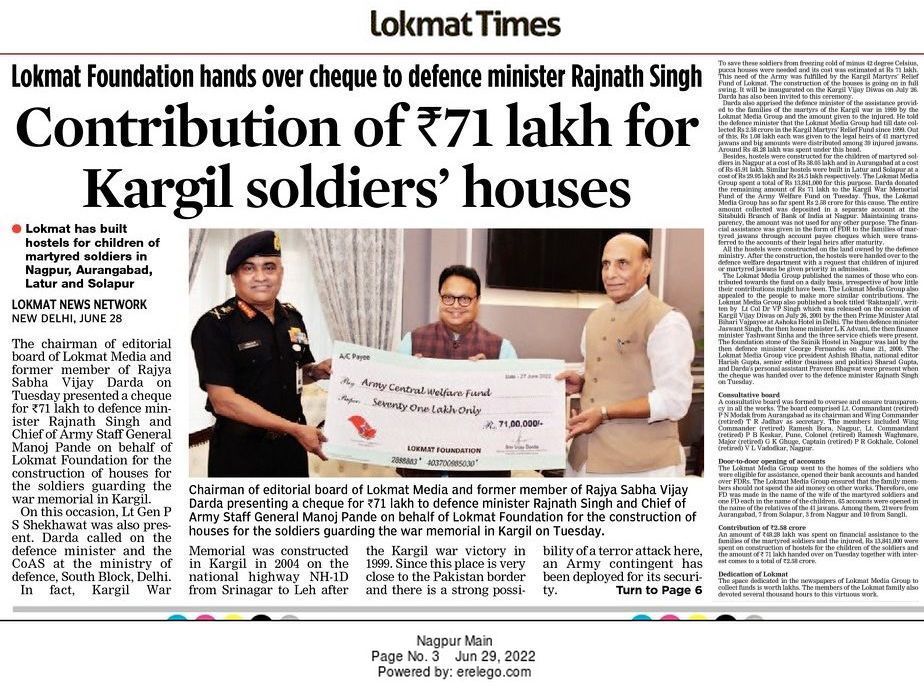 Gasping for breath on scary highway!