All of us went through a collective emotional experience recently when the master blaster Sachin Ramesh Tendulkar retired from international cricket after creating such a stunning record of playing 200 Test matches, and being the only international cricketer to have scored 100 centuries and 30,000 runs. All of us knew that one such day would come in our life when he would have to retire. He too knew that. But when the moment came all of us went emotional. It was simply impossible to hold back tears. This was no longer seen as a sign of weakness. But that was our way of sharing the experience of a historic moment.

Tremendously sad that moment was, but then it gave a full measure of joy when we heard him deliver his farewell speech. It was as if we had lost a batsman but discovered a public speaker who connects with our hearts. By standards of public speaking, it was not a long oration. But then it had the qualities of humility, integrity, passion and care. These are the things that we cherish in our human relations. Sachin’s respect for his family and his quest to follow his father’s mantra of being a good human being sets him apart from all achievers. Indeed, it is this that makes him a true Bharat Ratna –a jewel, a rare gem. In the game of cricket, it is a truism that records are meant to be broken. May be some day some Sachin records will be broken, but he would remain shining as a ’ratna.’. This is something that has been internationally celebrated. Even players against whom he has battled in the field have been won over by his off-the-field conduct.

Now, this is something that is achieved by an individual only if he or she has imbibed the right values during his/her formative years. As a person you cannot fake it or hide behind some cultivated persona, this is something that simply comes through. In our great tradition, these are called the ‘sanskars’, and this remains the apt expression for all times to come. You are only as good as your ‘sanskars’. Like on the cricket field, Sachin scores very high marks on this front. As he now finds more time to attend the parliament, I look forward to a closer association with this fine human being in the days to come as a fellow parliamentarian.

I find a somewhat odd comparison at the moment rather difficult to resist. But I must preface it with an observation that it is a limited one and restricted only to the use of words. There is simply nothing that is common between Sachin and the BJP’s prime ministerial aspirant Narendra Modi. They straddle in altogether different worlds. Sachin has already achieved the much loved hero status and acceptability in the hearts and the minds of the people of India as a sporting icon. In contrast, Modi is going all out to achieve acceptance in the field of politics.

But look at the soothing way in which Sachin used his words, and you cannot but wonder as to why someone like Modi who aspires to be India’s prime minister uses them in a very abrasive way? Should he really bring down the level of our democratic public discourse by using words like ‘khooni panja,” or shahjada” or for that matter taunt the Congress president for her ‘illness’. It is not a matter of taking any offence against tough criticism. That is always welcome in a democracy, and we are always prepared for a battle of ideology. The Congress has always fought and won against the RSS on this front. This has been going on since the days of Mahatma Gandhi, but then the recent down surge is simply disastrous.

Modi has practiced and perfected the art of insinuation. He revels in distortions, and relying on the principle that the details do not matter in the process of broader perception management, has been making speeches that cannot stand much factual scrutiny. Indeed, he knows that in this stage with his heavy handed techniques, he can get away even with blue murder in figurative terms. So, he did play with the memory of the founder of the Jana Sangh Shyama Prasad Mookherjee, and his party fondly overlooked that gaffe.

Partisan politics is of course a divisive game. But then great leaders have always won bipartisan respect from their rivals as human beings. Modi tries to run down the UPA rule and often argues that the NDA rule under Atal Behari Vajpayee was better, but then he forgets that Atalji too was never abrasive. Who can deny that he was a tall Opposition leader who tore into the policies of the Congress governments?

By now we all know that Modi is too much of a man who is consumed by his own self image that he and he alone can defeat the Congress-led UPA. In his arrogance, he has even jettisoned the time tested practice of anti-Congressism that has proved successful at all times in the past since the 60s at the state and national level. He has forgotten that democracy like cricket is a team game.

He did congratulate Sachin for the Bharat Ratna, but then it would be too much to expect that even an iota of the great batsman’s human qualities like humility and respect for his rivals would rub into the persona of the politician. He is simply cut from a different cloth, and in a nutshell, he simply does not have the same sanskars. We as Indians have been extremely fortunate to have Sachin on our side for 24 years in international cricket. He is not just a legend, but he has also built a legacy of young cricketers around him. They are all people who worship him as a God. It would be some useful exercise for Modi’s public relations handlers to ponder as to why their ‘brand’ is such a hate figure, when a mere cricketer can bring tears to billions of eyes on the day of his retirement. 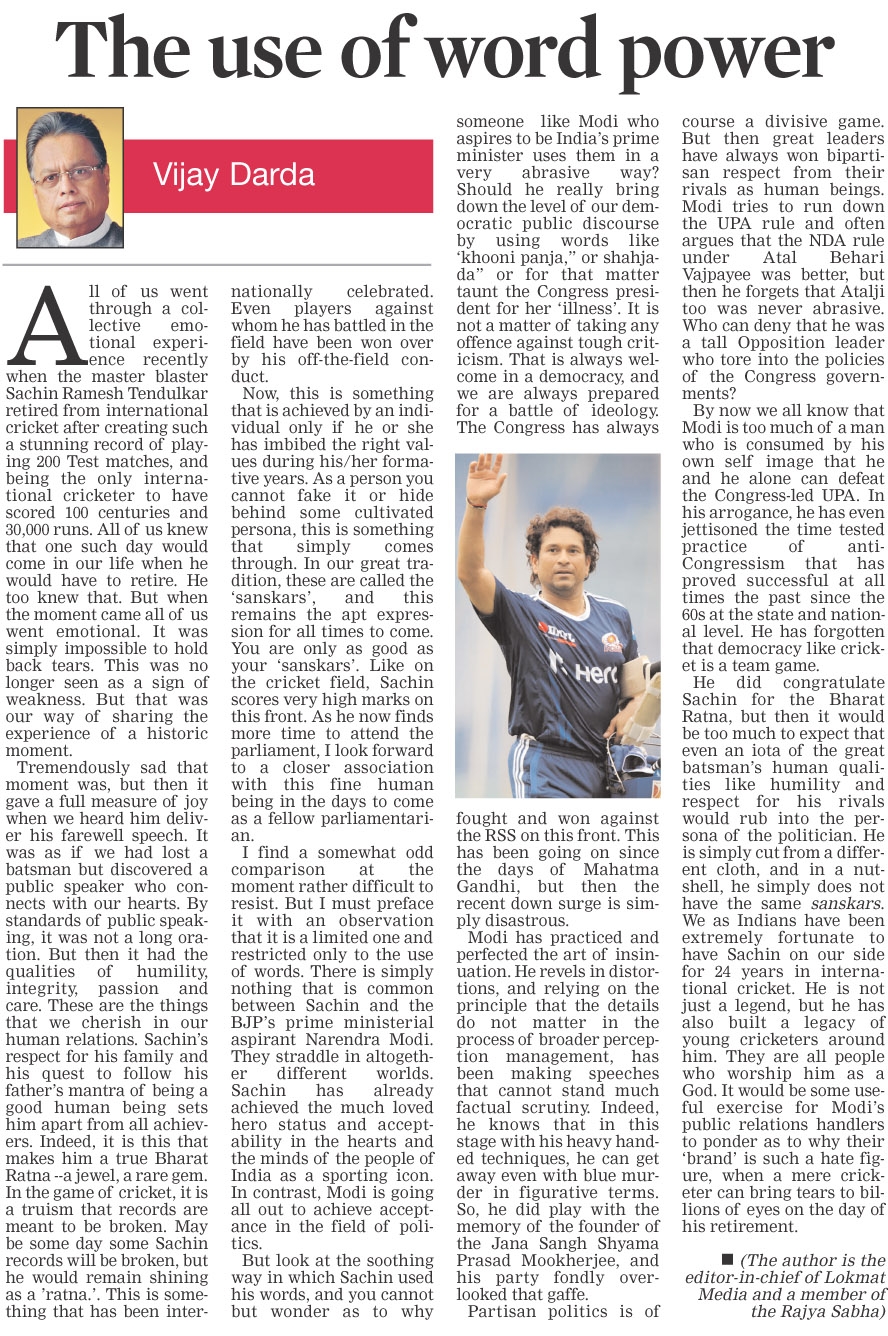