Families of martyred soldiers may be going through traumatic times, but yet they are proud of their sacrifices

These lines spring from the heart of every Indian soldier who is ready to sacrifice for the country. Every soldier deployed on the border to safeguard the motherland is the priceless heritage of the entire country, and when someone mounts a dastardly attack on him, the blood of the countrymen starts to boil.

On Thursday, when the news about 40 personnel of the Central Reserve Police Force (CRPF) who were killed by the militant outfit Jaish-e-Mohammed in Avantipora of Pulwama district in Kashmir broke, like every other citizen I was overwhelmed with emotion. My heart started to bleed with agony, began to boil with anger and my mind filled with the thought of taking revenge against enemies. I was pained at the thought of our country losing such a large number of soldiers in the dastardly attack, felt angry that we have not taught a lesson to the cross-border terrorists based in Pakistan who have been striking at our forces at will and going scot-free. After the Pulwama attack, every citizen of the country wants that the army should enter Pakistan and destroy the hideouts of the terrorists.

The question arises repeatedly in my mind that terrorists can no longer dare to enter in America again after the 9/11 attacks. After the 1972 Munich Olympics, the terrorists never had the courage to glance back at Israel again. Terrorist attacks in Russia went down from 144 to 30 in five years. Why is our country so helpless? From 1988 to January 7, 2018, the terrorists have mounted 47234 major and minor attacks in India. The terrorists targeted the Parliament which is the most sacred and supreme institution of democracy in our country and the Red Fort symbolising our pride. Inspite of these horrendous attacks, we could not eliminate cross-border terrorism and nor could crush the nefarious intentions of Pakistan.

In 1972, when the Palestinian terrorist organisation “Black Sept” killed 11 Israeli players in the Munich Games in Munich, this small country did not sit silent. It gave a hot chase to terrorists seeking each one of them and killing them wherever found. We have not scored any major victory against terrorism. In the nineties, the Congress government led by PV Narasimha Rao was successful in rooting out terrorism from Punjab.

We have to introspect as to why we have not been able to succeed in crushing the monster of terrorism. Either there are some weaknesses in our intelligence system or we are unable to make adequate use of the latest technology to keep an eye on terrorist acts. We need to learn strategies and skills to deal with terrorism from countries such as Israel and America. It is surprising that despite receiving the information from the intelligence network prior to the attack, we could not preempt it. We also have to make a resolve that if Pakistan is unable to deal with the terrorists, then we should go through it and eliminate terrorist bases and terrorists. To teach Pakistan a lesson like 1971, we need passion and determination like that of Indira Gandhi.

Terrorism is a national issue, hence none need to look at it from a political perspective. Congress president Rahul Gandhi and all opposition parties have demonstrated solidarity with the government after the Pulwama attack. Priyanka Gandhi, Congress general secretary, put off her press conference in Lucknow and presented an example by paying homage to the martyrs. When there is a sensitive issue like terrorism, there should be consensus on national issues. On the Pulwama terror attack, the opposition has given importance to the country beyond the party’s interests. I congratulate them. Apart from this, the media in our country – whether it is a print media or electronic media – needs to show restraint on such occasions.

I am of the opinion that on the martyrdom of the security personnel whether of the CRPF, SRP, BSF or ITBP, they should also be given martyr’s status like the army soldiers for sacrificing their lives for the motherland. Like the families of the martyred soldiers, their families should also get all the facilities. I went to Jaisalmer and I found the jawans of border security forces safeguarding the nation just 100 meters away from the Indo-Pakistan border.  Whether the border adjoins Kashmir or Rajasthan or Gujarat or eastern Uttar Pradesh, it is only the paramilitary forces that face the firepower of enemy and grapple with them. Then why are they being deprived of the status of martyr’s death on laying down their lives for the nation?

In the Pulwama attack, the martyrs’ families lost their dear ones, and the country lost its brave sons. The families of the martyrs are passing through an emotional trauma, but they are still very proud. They are stating with pride that one of their sons got martyred for the country and now they will send another one to protect ‘Bharat Mata’. The motherland which produces such brave souls can not be shaken by terrorism, even the biggest power of the world can not humble it.

We have to make a resolve that if Pakistan is unable to deal with the terrorists, then we can get rid of terrorist bases and terrorists by entering that country. To teach Pakistan a lesson like 1971, we need passion and determination like that of Indira Gandhi. 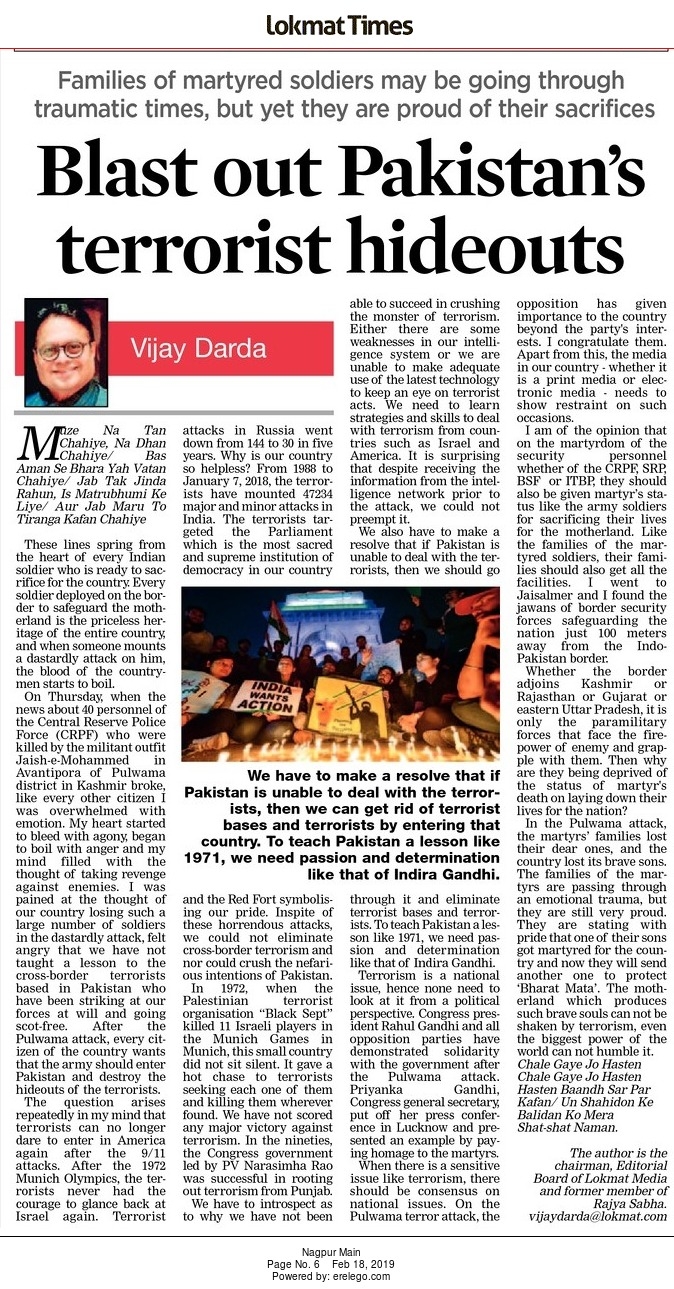 To compete, India needs to be economically strong