From panchayats, State Legislatures to Parliament, number of politicos with criminal antecedents is increasing alarmingly

The nexus between crime and politics is very old and it has assumed a more hideous dimension now. When Vikas Dubey, a dreaded criminal with political clout, brutally killed 8 policemen in Uttar Pradesh, it sparked a nationwide debate once again on this nexus. Since Vikas Dubey has now been gunned down, we may never know how many politicians he was working for and how many of them were working for him! It has already come to the fore that the entire Chaubepur police station in Kanpur district was like a fiefdom of this history-sheeter! Moreover, Dubey’s family members dominated all local bodies, right from panchayat to Zilla Panchayat. Perhaps, he could just as well have got elected as an MLA in the next election!

In 1993, the N N Vohra Committee had submitted a report on the unholy nexus of crime, politics and other administrative institutions. It studied the problem of the criminalisation of politics and of the criminals, politicians and bureaucrats’ nexus in India. The report also mentioned some such criminals who had become members of local bodies, State Legislatures and Parliament. The committee report was not presented in the Parliament for two years. In 1995, sensational Naina Sahni murder case rocked the nation and the government was forced to make Vohra Committee report public. However, only a select 12-page report, of the over 100 pages, was made public. In that report, it was clearly stated that the criminals at local level get protection from political parties and officials occupying government posts. Drug traders are also associated with these gangs. They also have a nefarious relationship with the mafia and foreign agencies.

But the question still baffles as to why efforts are not being made to root out the nexus between leaders, criminals, bureaucrats and police? The answer is that the nexus between criminals who have made deeper inroads into politics and politicians and officers who protect criminals is so strong that none of them will do anything to weaken this symbiotic relationship which could harm their interests. They have formed a syndicate of mutual interests. Statistics reveal that 24 per cent of MPs had a criminal record in 2004, which went up to 30 per cent in 2009 and 34 per cent in 2014. In the present Lok Sabha, 43 per cent of MPs have serious cases registered against them. In UP, 143 or 36 per cent of the incumbent 402 MLAs have criminal cases registered against them.

There are criminal cases against 142 MLAs in Bihar. There are also politicians who have been declared as ‘bahubalis’. The wicked nexus of criminals, politicians, police and bureaucrats is witnessed in every state, right from north to south and east to west. Shady characters are ruling the roost everywhere from panchayats to municipal bodies and state Assemblies. Since the caste system is predominant in Bihar and UP, the police there give protection to criminals in accordance with their caste.

The judiciary has also been making harsh observations on this grave state of affairs. In September 2018, while hearing a bunch of PILs, a bench of the then Chief Justice of India Justice Deepak Mishra termed the criminalisation of politics as a termite in the temple of democracy. On several occasions, the court has also issued directions to the government and political parties to free politics of criminals, but the reality is that no political party is serious about it. Political parties argue that they cannot deny a ticket to someone until and unless he is convicted. And the height of shamelessness is that if it is not possible to give the ticket to the mafia don, the same is given to his wife.

Apparently, the criminals are so deeply entrenched that they have grown bigger than the politics. They have built their evil empires around politics. They control everything and are into all types of businesses. Be it sand or murrum mining or liquor trade, criminals are everywhere. No one can get a contract without their consent. Many criminals have taken over the taxi and truck businesses. They control the workers’ unions in most of the factories. In the states like Bihar and UP, criminals run firearm factories. The drug trade has established its firm grip over almost every state. All this cannot happen without political patronage. Many films have also been made in our country on the theme of politics and crime, but the powers that be have grown so insensitive and thick-skinned that it hardly affects them. Our politicians even solicit the support of criminals as per their convenience in disturbing the social and communal harmony, let alone taking action.

Although there are many honest IAS, IPS and other officials who keep trying to crack down on criminals at their level, but they too have to bear the brunt of their political masters. They are transferred and persecuted in more ways than one. Some have even lost their lives. There seems to be no light at the end of the tunnel. The only way out which one can imagine now is that the common man should rise against it and exert so much pressure on the leaders and bureaucrats that they are forced to refrain from hobnobbing with the criminals. Courts should take suo motu cognisance and initiate necessary action too.

Is it possible that without any political and administrative patronage, someone like Vikas Dubey would become so audacious that he would kill eight policemen? One Vikas Dubey has been killed but hundreds like him are still there and politics is nurturing them. At work is a syndicate which is striking at the root of our democracy. 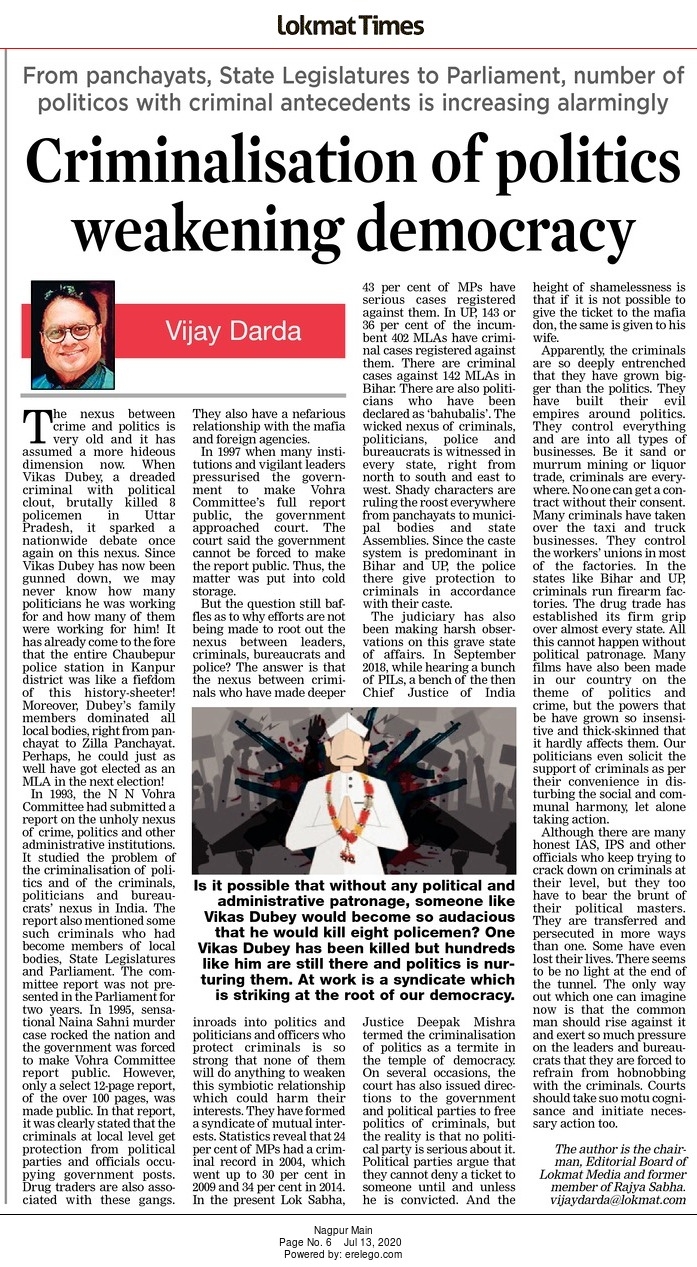