CAA did not take away anyone’s citizenship but the violence over it left dozens of persons dead, hundreds destroyed

At present I am abroad. There are two burning topics of discussion here. One is that India is developing a vaccine for tackling coronavirus and the second relates to the communal conflagration that has engulfed the national capital. Here my acquaintances are asking me about the communal riots in the country’s capital Delhi? Your country is not known for all this. I try to explain them the situation but often I run out of logic.

My heart is crying out for those innocent souls who have suffered in this violence. I think as to what is the total capital of a person vending vegetables or fruits on his cart? It must be Rs 1,000 or Rs 2,000 at the most. At the end of the day, he earns Rs 100 or Rs 200 and somehow feeds his family. Just imagine that some day a radical mob emerges from nowhere and burns his cart to cinder; now what will that person do the next day? A man pulls a rickshaw for a living and some day a mob of rioters running riot on the streets kills his 15-year-old son. Just imagine what will be left in that person’s life after that?

All this has happened in the country’s capital Delhi! Hundreds of families have been ruined. More than 40 people were killed and over two hundred people were seriously wounded. Shops were torched and hundreds of vehicles were burnt in the communal riots that engulfed the national capital. Simply put, life is sobbing in several localities of northeast Delhi and no one is willing to officially say who did it all. Whose conspiracy it was? The whole country knows the leaders who vitiated the atmosphere with their hateful words. The entire country heard the statements that attempted to destroy harmony, but no FIR was registered against them. It is surprising that the government says that it is not the right time to file a case against those who made inflammatory speeches! Why is it not the right time? If someone has given an incendiary speech, it should under no circumstances be viewed from a religious perspective. He should be seen as a criminal and treated as per the law of our country.

As far as the law is concerned, the whole country is surprised that for the first two days, why did the Delhi Police not take action to stop the violence? The police machinery did not act even after police head-constable Ratan Lal and Intelligence Bureau staffer Ankit Sharma were killed by the rioters. The question that arises is how could any leader continue his diatribe and challenge the police? The way the large-scale violence has taken place shows that preparations must have been made beforehand. The large-scale firing by the rioters indicated a large criminal conspiracy. Did Delhi Police not get a clue? If not then it is even more dangerous. When this is the state of affairs in the national capital Delhi, imagine what will happen to other cities of the country? The question is serious because criminals have engineered this riot. It included criminal elements from both sides. And the end result was that the common man from both the sides suffered.

Surely planned attempts were made to sow hatred among people in Delhi, but it is a matter of relief that humanity persisted and won even in the midst of such virulent conflagration. In Mustafabad area, a woman named Manju Saraswat was rescued by Muslim youths from the clutches of radical rioters and she was sheltered at Momin Saifi’s house. Similarly, a Muslim girl was saved by a woman named Pinky Gupta. Haji Noor Mohammad got anxious when his family members informed him that the rioters had surrounded the locality from all sides. He was in Saudi Arabia. He spoke to several of his relatives over phone but no one was ready to go there. Then he remembered his friend Puran Chugh. Noor Mohammed called Chugh who without wasting time, reached Haji Noor Mohammad’s house. It was not easy to reach there amidst riots. Chugh not only rescued the family of Noor Mohammad, but also saved another family and safely took them to the house of their relatives.

Such reassuring humanitarian stories amidst the communal conflagration tell us that hatred has not ingrained so deep that it can destroy humanity. Actually this is our biggest strength. Some fanatic forces keep trying to disturb the communal harmony from time to time, but the humanity inside us, our social concern and mutual brotherhood win every time. I have always believed that our religion is our personal belief which instills values in our life, but the biggest religion is humanity. No religion in the world ever teaches hate, let alone violence. Believe me those who try to incite violence in the name of religion and indulge in violence have no religion. They are no more than criminals. Such criminals should be dealt with so strictly that they can never instigate violence again.

And yes, we all must take enough care to see that no one can sow the seeds of hatred among us. Unity is our identity and unity is our strength. So stay together, stay alert and stay vigilant!

Whatever happened in Delhi is shameful for the whole country. The nation also wants to know how did the motormouth leaders get a free rein and what was the Delhi Police doing? A head constable and an IB official have also died… and who will think about the families which were completely devastated in the riots? 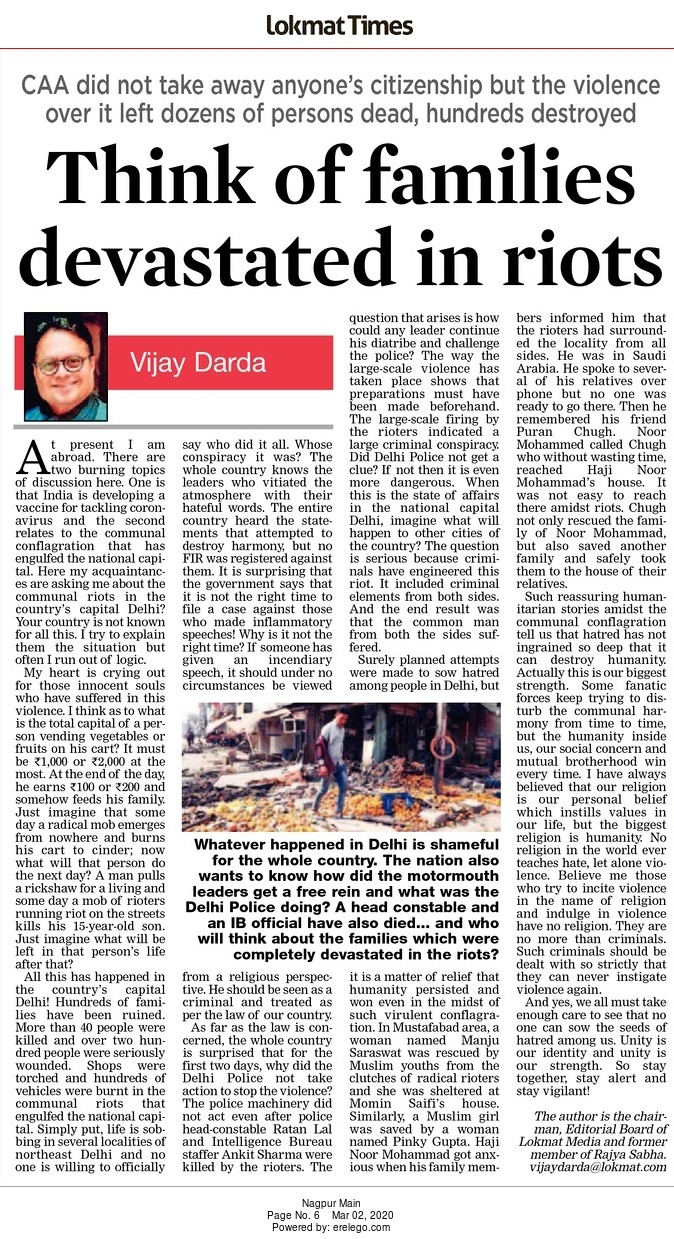