Way back in the 90s, brother Rajendra (now the education minister of Maharashtra) and myself went to Germany in search of latest printing machinery for our newspaper. A German salesman was giving us the usual pitch about the ‘excellent’ qualities of the machines. In an aside, the two of us wondered in Hindi as to whether the man was not taking us for a ride. “No sir, not at all, everything is genuine,” he responded in Hindi. We were simply taken aback. Then he unlocked the mystery that it was the company practice to study everything related to the background of prospective customers.

So, a German salesman learning Hindi to do his job well is an accepted practice. Even in our country, the officers of the Indian Foreign Service learn a foreign language, and the IAS officers allotted a particular state learn the language of the state. Let us get it right at the outset, that for civil aspirants — the ones chosen by the system language is not an issue.

But as Indians we all love binary contests — say Modi versus Rahul, or English versus Hindi, or for that matter rich versus poor and rural versus urban. The advantage of such battles is that we get the full opportunity to express our biases and vent our frustrations and disappointments. In the process, we don’t care if the nuances are lost and the issues are clouded. Neither do we bother about the costs involved in fighting such battles. Our primal desire is to settle arguments in clear cut black versus white terminology. It is not for nothing that we have been called argumentative Indians by the famous Nobel laureate Amartya Sen.

For the past few weeks we have witnessed an unseemly controversy over the Civil Services Aptitude Test (CSAT) conducted by the Union Public Service Commission (UPSC) for the purpose of screening the applicants who wish to join the higher levels of bureaucracy — IFS, IAS, IPS etc. The CSAT had been introduced in 2011, but protests have gained momentum only this year. This, of course, has given weight to the UPA versus NDA argument, but in this context it is beside the point. The main issue being that with lakhs of young persons from all over the country appearing in these examinations, and only a few thousands being selected is there a level playing field for all concerned.

Given the fact that the protests began with the aspirants from the north Indian states, notably Allahabad and the main demands came from the Hindi speaking areas, there is a strong anti- English dimension to the controversy. Along with this, the associated fault lies like urban versus rural, rich versus poor have also come along. The fact that a public interest litigation had been filed by Dina Nath Batra in the Delhi High Court on this issue with a demand that the component of English comprehension skills in the test be done away with is also very relevant. Batra is no ordinary citizen. He is the RSS man for all ‘reforms’ in education. His nine books are prescribed as reference materials in all schools in the state of Gujarat. These come with an introductory message from Prime Minister Narendra Modi. Indeed, when the government brought the curtain down on this phase of the controversy, Batra was perhaps the only man ‘satisfied’. It had been agreed that the marks for the contentious English comprehension component would not be counted for the purposes of ‘gradation or merit.’

Of course, according to the government this is an interim arrangement for the examination to be held on August 24, and then the wider consultations would take place. So, the point is that does this anti-English Batra-inspired victory really create a level playing field for all the aspirants? Are we on the right path on such a sensitive and critical issue that holds the key to our national interests? We must remember that the question of linguistic identity has been a major troubling factor for us. In the 60s, we did have language riots, and it was only after that we had come up with the three-language formula. With this decision to eliminate the marks for English comprehension have we taken the first step towards dismantling that three-language formula?

Bringing together the regional, national and the global, the three-language formula suggested that a regional language (Marathi, Malayalam as per the concerned state), the national language — Hindi, the official language as per the Constitution and English, the global language of commerce should be taught in schools to equip the children for the future. In so far as the competitive exams were concerned, these could be taken in any of the official languages. But there has been a failure to implement this formula in letter and spirit, and all the three languages have not been given the due importance in states.

There is a history to English bashing, and it is considered as a monster that needs to be beaten up and subjugated at every opportunity. One can understand the psychological need for many people to adopt this attitude due to historical reasons. But the point is do we do any good to our children by creating this anti-English hysteria? There is no point in citing the French or German preference to their language, because over the last several decades the English advantage in our society is well-entrenched. Just find a Tamilian who is not impressed by the English speaking skills of chief minister Jayalalithaa. Or notice this trait among top BJP leaders (Jaitley, Advani to name a few) to deliver their punchlines in English during parliamentary debates. So, by downgrading English would we not put our children to disadvantage?

But the language debate in the context of the CSAT is quite spurious. The real problem is the role of the coaching institutes that make huge money out of the aspirations of the youth cutting across all the divides. The prelims examination is divided into two sections — General Studies and CSAT and both the papers are of 200 marks. The General Studies consists of 100 questions and the CSAT of 80 questions. But the marks required to qualify in General Studies is 30 whereas for CSAT it is 70.The CSAT comprises questions based on communication skills, logical reasoning and analytical ability, decision making and problem solving, general mental ability, basic numeracy, data interpretation and English comprehension. The basic core of the coaching institutes is that the students simply memorise the ‘model answers’ and the difficulty with objective type questions and negative markings is that you cannot memorise the answers. So, this is the problem with CSAT and not English comprehension which is just of the Class X level.

Let us not forget that the Civil Services Examination over the years has picked up some of the best brains from our country, and they have not been restricted by any of the pet divides — rural/urban, rich/poor, Hindi/English. We have a fair sprinkling of intelligent persons manning the civil services, and it has not been the monopoly of any single category. We do need a healthy debate on languages, but not something that is clouded by other concerns. 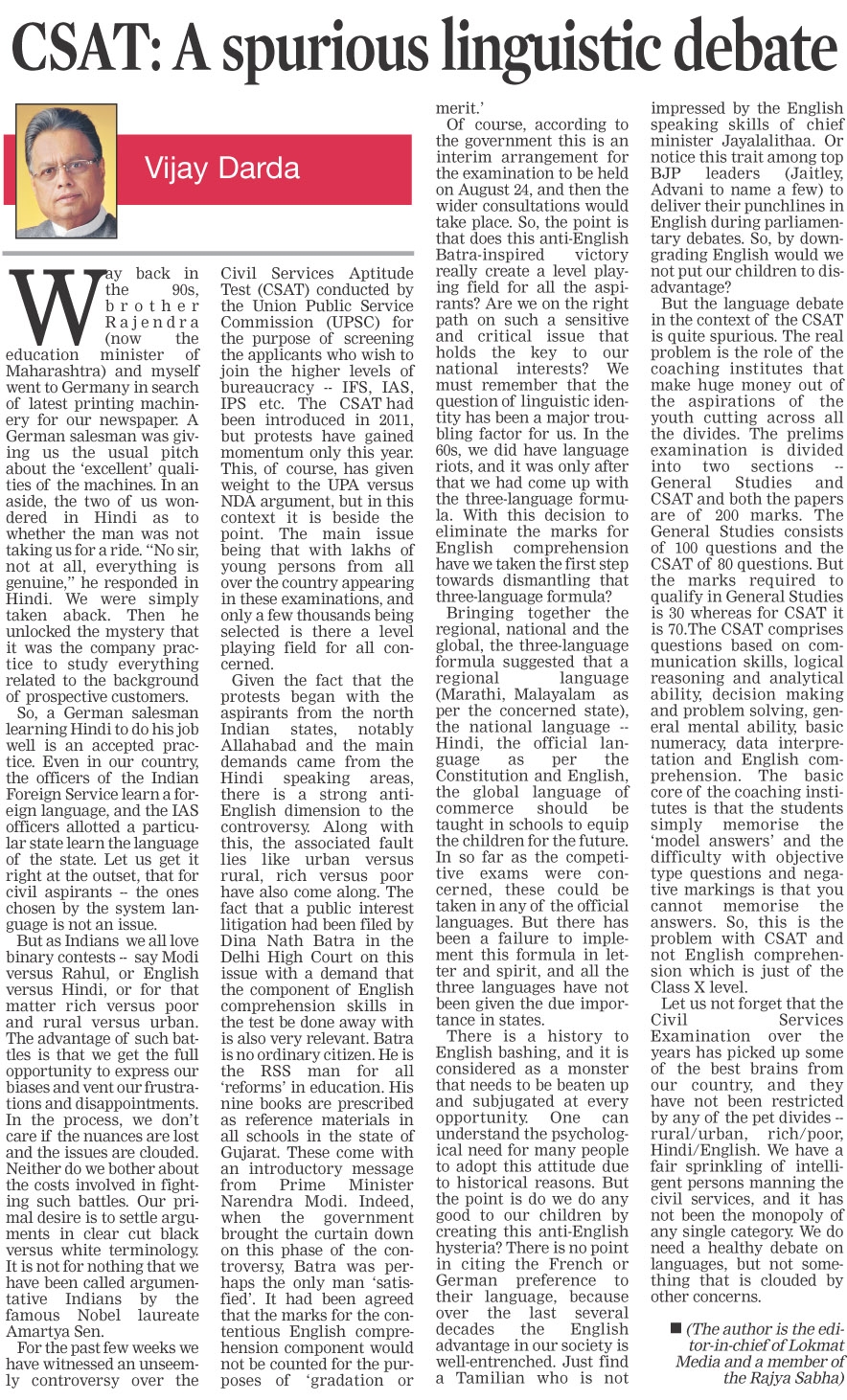 Neglect of regional language is dangerous

Consumer at mercy of big business

For 200 crore users Mark Zuckerberg is the culprit!