Memories of the first World Hindi Conference held in Nagpur around 43 years back are still fresh in my mind because my Babuji freedom fighter Jawaharlal Darda was very active in the conference along with the editor of Nagpur Times and eminent Hindi litterateur Anant Gopal Sheorey. It was organised by the National Language Promotion Committee from January 10 to January 12, 1975 at Wardha and the president of the National Organising Committee was the then vice president B D Jatti.

The conference was inaugurated by the then prime minister Indira Gandhi and the then prime minister of Mauritius Sir Seewoosagur Ramgoolam graced the occasion as the chief guest. Other literary giants like Kakasaheb Kalelkar, Father Camille Bulcke and Mahadevi Varma had participated in the conference. UNESCO sent Asher Dillion as its representative. Representatives of several countries including Denmark, Czechoslovakia, Poland also participated. Anant Gopal Sheorey had played the important role of the general secretary of the first World Hindi Conference.

The concept of World Hindi Conference was originally mooted by the then prime minister Indira Gandhi. It was for the first time that Hindi had emerged as a language to reckon with on the world stage and the purpose was to grant global recognition to Hindi. Now there is also the World Hindi Secretariat in Mauritius and efforts are being made to ensure that Hindi is recognised as the official language of the United Nations. Hindi is the fifth largest language in the world. However, Hindi has to travel a long distance before getting recognition as the official language of the United Nations. The reality is that we have not been able to give Hindi the actual status of the national language till now. Some stumbling blocks were put up by politics while some government departments played a lot of mischief. If you read the official gazette, you will not understand anything.

In spite of the simple words available in Hindi, such heavy and complicated vocabulary is used that the reader gets put off! When I was elected as a member of the Rajya Sabha in Parliament, I had chosen the option of written Hindi in order to ask the question. But when government documents came in front of me in Hindi, their language was so difficult that I did not understand anything. From every government department to the banks, there is a separate department of Hindi language. Crores of rupees are spent every year. God knows how many crores of rupees have been spent in the name of promotion of Hindi in the last 70 years. It is widely publicised that work should be done in Hindi but the language has been made so hard that none would try it! English dominates the entire government system. If this situation continues, it would take more time to establish Hindi than the time the British ruled us.

Language is not just the means of communication, but it is also related to our culture. Language is the identity of different language speaking groups of the country. The national language of any country is also its identity and it remains the symbol of its solidarity. Language is also important for financial transactions. Our governments have not been able to explain this fact to the people of the country so far.

If a person from Rajasthan wants to go to Tamil Nadu to do any business or any other work there, he will have to learn Tamil. If a person from Maharashtra goes to Gujarat, he will have to learn Gujarati. We see that other linguistic people settled in Andhra Pradesh, Telangana, West Bengal, Gujarat, Maharashtra and Rajasthan speak the local language fluently. We have to create such an environment in which Hindi becomes the most universal language of the country. Why should we oppose Hindi when we do not oppose Tamil? Gandhiji felt the pulse of the country and that is why he had said that the nation is dumb without the national language. Hindi can and should be the national language of India. I believe that regional languages are important in life but there should also be a lingua franca of the whole country! Hindi is associated with our culture. That is why it has the ability to become the language of the whole country. I believe that Hindi should be mandatory in all schools. From first grade to class 12, regional language should be the first language while Hindi should be the second language and English should be the third language.

Just as IAS, IPS and foreign service officials go to other states and other countries and learn the local languages there, Hindi should also be taught throughout the country in the same way. It is so surprising that people are learning French, German, Russian and other languages but do not speak Hindi, Marathi or their regional language properly. Nothing is impossible if we make a resolve. We have the example of the United Arab Emirates. All the immigrants who go there for work speak in Hindi. In fact, UAE has done what we have not been able to do. The situation here is that the dominance of English has not only hit Hindi but the regional languages are in danger too. If someone speaks even a little bit of English, we assume that this person is very intelligent. I have visited many countries of the world and I keep travelling.

I have seen that every country always respects its own language. They use English only when they need it. Countries like China, Spain, Britain, Japan, Russia, France are the biggest examples of linguistic patriotism. As the spoken language, the Chinese language is the first in the world. The second is the Spanish language. Just imagine that Spain’s population is only 4.50 crore and 4.37 crore speak in Spanish. China has preserved its language and culture. They are proud of their language. China did not allow Google, WhatsApp, Facebook to enter there. It developed these mediums of social media in their own language. Russian is the language of Russia. The medium of higher education there is also Russian. Russian is also used for scientific research. Same is the situation in Spain. Spain strengthened the Spanish in the countries where they ruled, which were their colonies. That’s why Latin American (South American) countries like Brazil, Mexico, which were colonies of Spain, have Spanish as their language.

India’s population is more than 100 crore and Hindi is spoken by only 26 crore people, hence Hindi ranks fifth most spoken language worldwide. If the whole country starts speaking Hindi it can stand at second position worldwide! We must learn from the UAE or Dubai. There are millions of Indians staying there for employment. The majority of these Indians are people of South Indian states like Kerala, Tamil Nadu, Karnataka. These people run taxis, work in malls, are engaged in construction work. All of them use Hindi only for dialogue. To communicate with these people, the government of that country has also adopted Hindi only.

I just got a video. In this video, a person is asking some youths to read Hindi alphabets like ka kha ga to sha ha, etc. Then the same youths are asked to read out English alphabets like A, B, C to Z. Most of the youths are not able to read the Hindi alphabets and shrug their shoulders saying they don’t know it in entirety! There is no sense of embarrassment on their face! The same youths read English alphabets. There is a triumphant expression on their face! It is sad to see this video that shows utter indifference of the youth towards the language of our country. Is not it a linguistic slavery?

I would like to praise Prime Minister Narendra Modi that more than 90 per cent of his speeches are in Hindi. He is a Gujarati but there is no Gujarati accent in his utterance. He speaks superb Hindi. He expressed his views in Hindi on different forums of the world and enhanced the pride and glory of Hindi. Through his speech in Hindi, he is giving this message that the lingua franca should be Hindi only. Let me tell you that Soniaji knows very good Hindi. In the initial interactions I started talking in English and she started answering in Hindi. Vice President Venkaiah Naidu, Shashi Tharoor, Mani Shankar Aiyar, Jairam Ramesh are not basically Hindi-speaking but know Hindi very well. They also speak Hindi fluently. I just met the spiritual master Sadhguru Jaggi Vasudev. I asked him what language he would like to talk to me in. He replied that he wanted to speak in English. Had he spoken in Hindi, millions of youth of the country would have benefitted from his powerful ideas. The influence area of Hindi is very vast. We need to make it vaster.

Three girl students have died a tragic death after their scooty crashed into the crane of the metro rail project in Nagpur. This news is heartbreaking. It makes me shudder to think what anguish their aggrieved families must be going through. But this accident could have been avoided. Had the traffic rules been followed, the lives of these three students could have been saved. Obeying the rules is not the responsibility of the government alone. Parents also have the duty to tell their children to follow traffic rules and tell them how dangerous the consequence can be of riding the two-wheeler triple seat and that too without wearing helmet. Though the government, newspapers and social media keep running awareness campaigns, stressing the need to wear helmets and follow traffic rules, we have some responsibility too!

Today, on August 20, the 11th World Hindi Conference concludes in Mauritius. Scholars from around the world have been discussing the status of Hindi for the past three days. The external affairs minister Sushma Swaraj is there too. I am happy that the Government of India has included the editor of Lokmat Samachar Vikas Mishra in its delegation. Let’s look at the condition of Hindi in our country on this occasion! 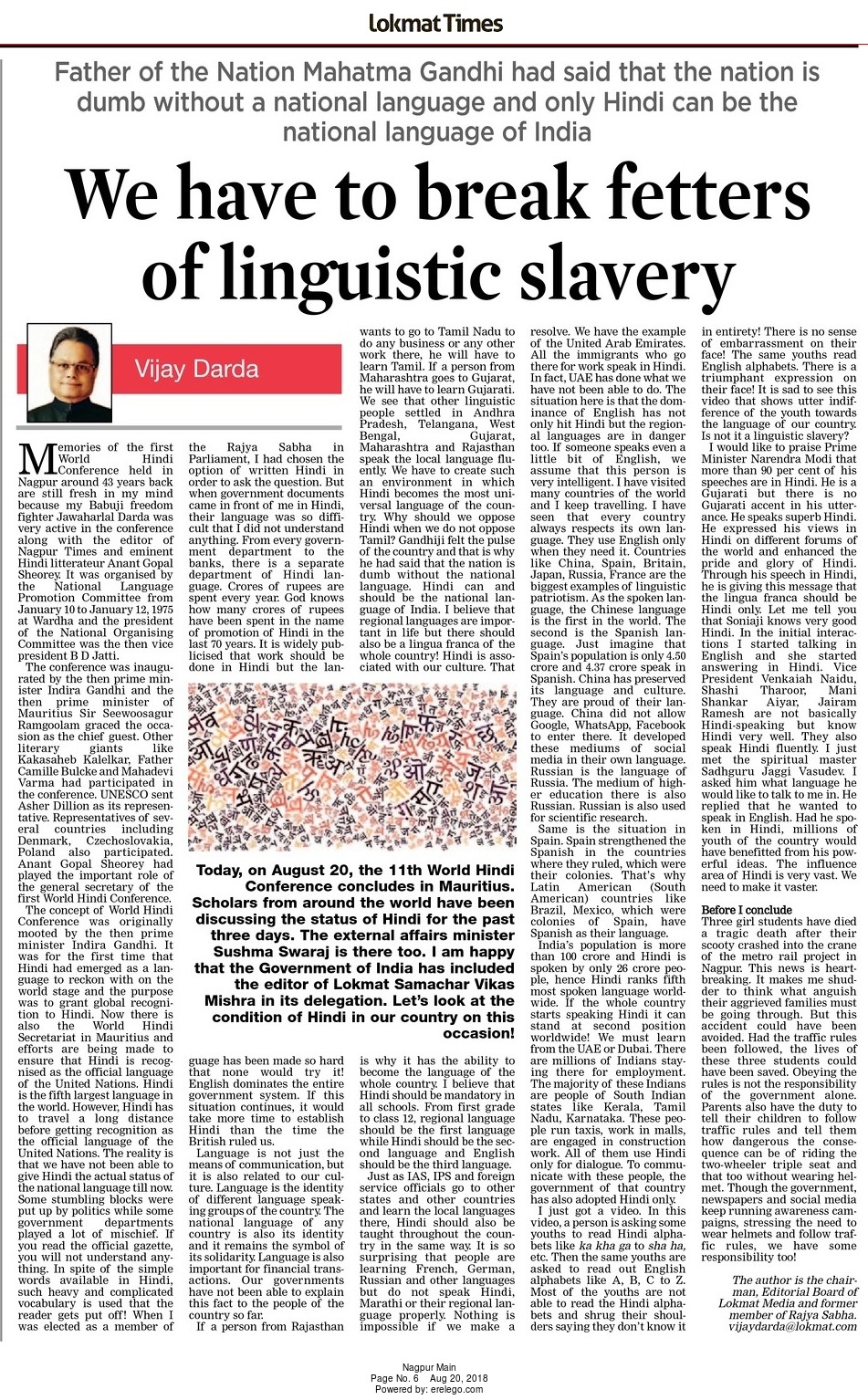 Neglect of regional language is dangerous