The trend of tearing children away from our culture and introducing them to Western values is hurting the entire society and the country.

Whenever I visit any country, I try to explore and get to learn about the civilisation, culture and life there. I meet the common people. I had the opportunity to visit many countries of the world and I have found that the citizens of most countries are proud of their country and are very conscious of their own language, civilisation and culture. Whether you go to Japan, Russia and America or smaller countries, the people there are proud of their culture which is an integral part of their lives. They love their country immensely.

When I look back at India, I see the situation looks very sordid indeed. We are abandoning our language and switching our dress code and are moving away from our civilization and culture. There is no doubt that patriotism is inherent within every person but there is no Indianness visible. There is a lack of pride for our country. Now I have a video of a French journalist. In his video message, the French journalist is saying that India has the capacity to become a super nation, but unfortunately India is engaged only in copying others. Once India was the land of innovation, now Western clones are being created.

I think the French journalist is right. Once upon a time, India used have a universities like Takshshila, Nalanda and Vikramshila where scholars from all over the world used to gather. Today there is not a single university in our country that can be called as world class. From mathematics to astrophysics and spirituality, India introduced many unsurpassed discoveries to the world. There is no such thing seen in the same country now. We are developing a generation which can be called “export quality generation”. Everyone wants to go to the US. Why so?

Indeed, when Britain began to rule over us, it understood that India’s linguistic and cultural heritage is strong and unless it is destroyed, Indians can not be colonised completely. That is why British educationist Lord Macaulay advocated an education system that could only create clones. On February 2, 1835, Macaulay said in Kolkata that Sanskrit and Arabic are old languages and if this country (India) is to be modernised then it must be taught English. Need to be taught new values. In Macaulay’s statement there was no intention of making India better. His intention was that India should forget its past history and it should feel that there is no language better than English! If Indians will study English then they will come closer to the British Empire.

The education system of Macaulay was implemented in India and a generation started to emerge for which English was the noblest language. They started reading Shakespeare, Wordsworth and Keats. Kalidas was out of our studies, while the world still believes that no poet greater than Kalidas was ever born. Because of the education of Macaulay, Sanskrit gradually began to shrink. Today, only a few people know Sanskrit.

How unfortunate it is that we are teaching our children about Western heroes, but nothing is being taught about brave-hearts like Chhatrapati Shivaji Maharaj, Maharana Pratap. Lord Buddha’s philosophy is no longer visible in our lives. We do not even talk about Maharshi Aurobindo. When children do not read about their culture, their civilisation and their spirituality, how will they become completely Indian? There is no exaggeration in saying that our education system has proved unsuccessful in introducing the children to their roots. There is no effort on this count either. The result is that our children like America and Europe more than their own country. They love India, but the lack of Indianism is clearly visible. They do not know about their country’s discovery of ‘Pranayam’. They do not know anything about meditation. Better understand that the tree which is uprooted from its soil does not bear any fruit. How will the country become a great nation unless the youths of India become proud of being Indian?

It is a bitter truth that in our educational institutions we are producing ‘Western clones’. Our education system has proved to be unsuccessful in developing a generation which takes pride in its Indianness. Unless we are proud of Indianness, how will India be great? 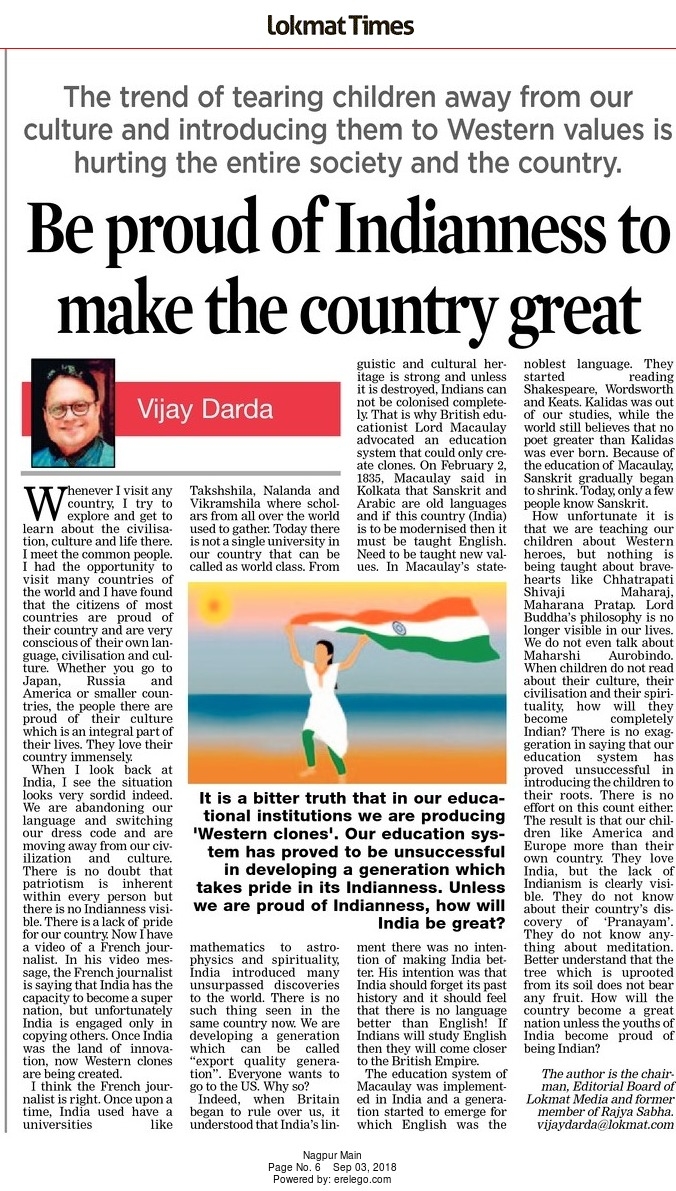