Departures that leave trail of grief

Last week we lost two splendid human beings and versatile actors: Irrfan Khan and Rishi Kapoor. In spite of being diametrically different from each other in style, both were lovable, unique and the darlings of the audiences! Everyone is grieving as if they had lost a member of their family. We feel connected to them. Their movies had provided great relief in the hurly burly of life. It’s but natural that a close affinity should develop with someone with whom we identify. That’s why the death of any celebrity actor fills us with grief. It’s not just actors but also national leaders or celebrities of other walks of life, around whom we develop intense affection and when they depart, our grief knows no bounds. The moot question is: How can we define such relationship?

We feel overwhelmed with grief when someone dies young. Neither Irrfan was old nor was Rishi Kapoor very old. Cancer snatched both of them from us. Though the background and circumstances of these two artistes were completely different, what made them both stand out was their absolute humanity. Both had excellent personality traits. Irrfan hailed from an average family. He had not received anything in inheritance. Neither was he handsome nor was he a chocolate boy, but his acting was wonderful. He was a charismatic personality. His eyes spoke. He used to fit into the character and the character would fit into him. He had come to Mumbai without any support and carved out a niche for himself on his own. His personal life was very clean and unblemished. His father Yaseen Ali Khan used to say that a Brahmin was born in Pathan’s house.

I would like to share with you a piece of his spontaneity. I met him only once, but that one meeting deeply impressed me. I was going from Mumbai to Delhi. Irrfan was also there when he boarded the bus to go from the airport terminal to the aeroplane. He seemed a bit upset because the flight had got a little delayed. He asked me if he would miss the flight. I told him that since we had boarded the bus; we would not miss the flight! He said very spontaneously – I am talking about the connecting flight. Such childlike spontaneity! That was Irrfan. When brother Rajendra Darda and his wife Ashu Darda had invited Irrfan to the Lokmat office in Aurangabad, he simply walked in and met the editorial staff and shared moments with them. This charismatic actor never even once showed that he was a celebrity. Such disarming naturalness!

As far as Rishi Kapoor is concerned, he was born into acting, bequeathed as he was with the enviable Kapoor blood and genes. But even he had to struggle in order to win the hearts of the audience. He honed his acting skills and developed his talents. The audience has showered their affection and appreciation on generations of the Kapoor family right from Prithviraj Kapoor to Ranbir Kapoor as their superlative acting skills breathed life into their roles on the screen. They all worked very hard to master acting skills which left the audience spellbound.

Rishi Kapoor was an embodiment of his grandfather and father. He used to act very spontaneously. He personified youthfulness and redefined romance for the Hindi cinema. I was introduced to Rishi Kapoor by his grandfather Prithviraj Kapoor. After that our relationship went from strength to strength. I was always proud of our friendship because he was a true friend. He was more than willing to attend any event, I invited him to. Such humility and friendliness made me his admirer. Once he accepted an invitation, he would attend irrespective of his busy schedule! He came to Yavatmal on my invitation when Bobby had become a super-hit film and he had become the heartthrob of the nation and was at the peak of his career.

It was his values that made him so humble and natural. His legendary grandfather Prithviraj Kapoor had also came to Yavatmal twice on the request of my ‘Babuji’ freedom fighter Jawaharlal Darda. Once he had brought his drama company and the second time Babuji invited him for flag hoisting. The only regret is that Rishi Kapoor’s last wish could not be fulfilled. A few days ago, we were having a telephonic conversation. He said “if Ranbir gets married and I see my daughter-in-law, then all my desires will be fulfilled”. I wish Rishi Kapoor could see his daughter-in-law!

I would also like to tell you that Rishi Kapoor was a very well-read person who had also penned a book. He sent me his book ‘Khullamkhulla: Rishi Kapoor Uncensored’ with his signature and in turn I sent him my book “Public Issues Before Parliament” about my work in Parliament. He read it and discussed it with me. Even though Rishi Kapoor and Irrfan are no longer among us, they will always live through their work. They can never be forgotten. Rishi Kapoor’s departure like a song in his film ‘Bobby’ seems to say “The room got locked and the key got lost”.

I met Irrfan only once but Rishi Kapoor was my friend, and therefore I used to meet him often. Their sudden deaths have left us all in shock. Actually, it is very difficult for anyone to define the bond of relationship developed over the years with these versatile actors. 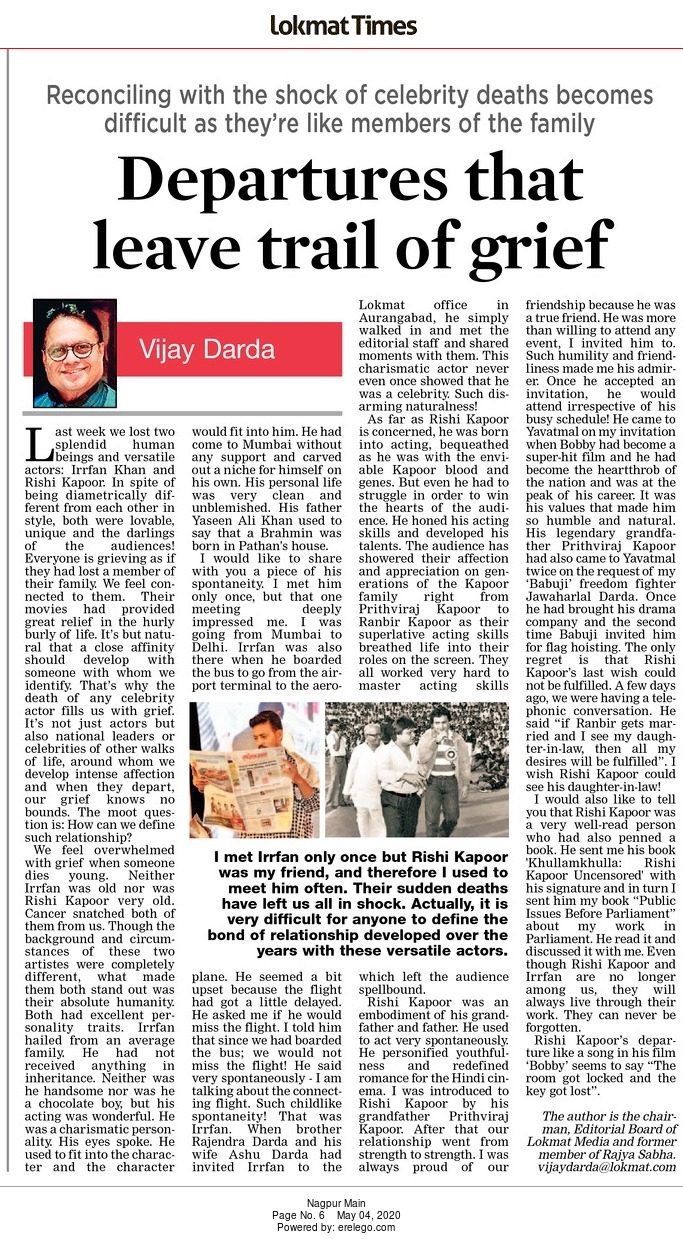 The void will never be filled