The void will never be filled

The sudden and unexpected death of veteran political leader and my dear friend Gopinath Munde has caused big void in Maharashtra. His departure has caused an irreparable loss not just to Marathwada but to the entire Maharashtra state and the country. Munde was a truly mass-based leader who rose through the ranks. His heart beat for the poor and general populace and strove hard to ensure justice for every deprived section of the society. He was a true fighter who raised the issues that affected the common man. As an MLA, MP or even as leader of opposition, Munde distinguished himself by raising the issues of interest to the common man. As the deputy chief minister of Maharashtra, Munde took decisions that benefited the common man. He also distinguished himself at the national level as the deputy leader of opposition in the Lok Sabha. It was his sense of social commitment, spirit of patriotism and never-say-die attitude that scripted his success story.

Munde had a massive following in Maharashtra, and just as his fans nursed the hope that this great leader would represent their aspirations at the national level, the icy hands of death snatched this rising son of Maharashtra. The tragedy becomes terrible considering that he was on way to attend the felicitation programme and participate in a victory rally, just then the death snatched him from his countless fans.

Just as Munde was a valiant political warrior, he was a fiery orator too. I have heard many of his famous speeches in the assembly and at political rallies. My father late Jawaharlal Darda was greatly impressed by the pun made by Munde on the then revenue minister Shankarraoji Kolhe. ‘Babuji’ was so much impressed that he blessed Munde wishing him a bright future career in politics. When he was the leader of opposition, Munde had mounted such a concerted attack on the then Chief Minister Sharad Pawar during the election campaign that the government looked helpless in the face of his criticism. Munde was an amiable person. He had as many friends in Congress as in BJP. Despite trenchant criticism of Pawar, Munde maintained very cordial relations with him. Munde’s friendship with the former chief minister late Vilasrao Deshmukh was very close.

At one time in his political career, Munde felt sidelined and frustrated and hence resigned from all posts. The impact was so electrifying that all leaders and workers including the then BJP state president Sudhir Mungantiwar to the present state chief Devendra Fadnavis put in their resignations. All the senior BJP leaders persuaded him to take back his resignation. He took back resignation due to his love of social work and expectations from people did not let him remain idle and he rejoined politics soon. By his action, Munde proved that he was the most popular BJP leader in Maharashtra and that he alone could steer the ship of BJP in the.

Munde had an aura of invincibility and that is why his friends as well as rivals were in awe of him. He had the sagacity to distinguish friends from foes and also believed in the dictum that there are no permanent friends and enemies in politics. He had decades of experience in politics and social work. He never gave in to threats or harboured fear of any kind. He had fully devoted himself to the cause of social welfare and development of Maharashtra. He was an outspoken leader who spoke what his mind thought. He never hid his feelings behind the sophistry of words or allusions. He spoke the language that the common man understood and hence had a close contact with the masses. He was a man of the masses and possessed all the qualities of a great leader.

He hailed from Parli Vaijnath in Beed district of Marathwada which houses one of the 12 jyotirlingas in the country. During his college days, Munde came into contact with Pramod Mahajan. Their friendship deepened and Munde took plunge into politics on the advice of Mahajan whose sister he later married. Munde took deep interest and whole-heartedly participated in the public agitations be it under Govindbhai Shroff’s Marathwda vikas parishad or the renaming of Babasaheb Ambedkar Marathwada university, seeking railway connectivity for Aurangabad or highlighting the floods in Marathwada that left the region barren for years. Munde was always at the forefront of all public and social movements. He suffered the ‘lathis’ of police and even went to jail for public causes. When he came out of jail, he was more determined to fight for the social and public causes.

Munde has three daughters. Pankaja is a legislator, second one is a doctor while third daughter is a student. His untimely departure has caused a great loss to the state. Let us assure that the whole state, society and political leaders cutting across the narrow political bounds are with the Munde family in this hour of crisis. 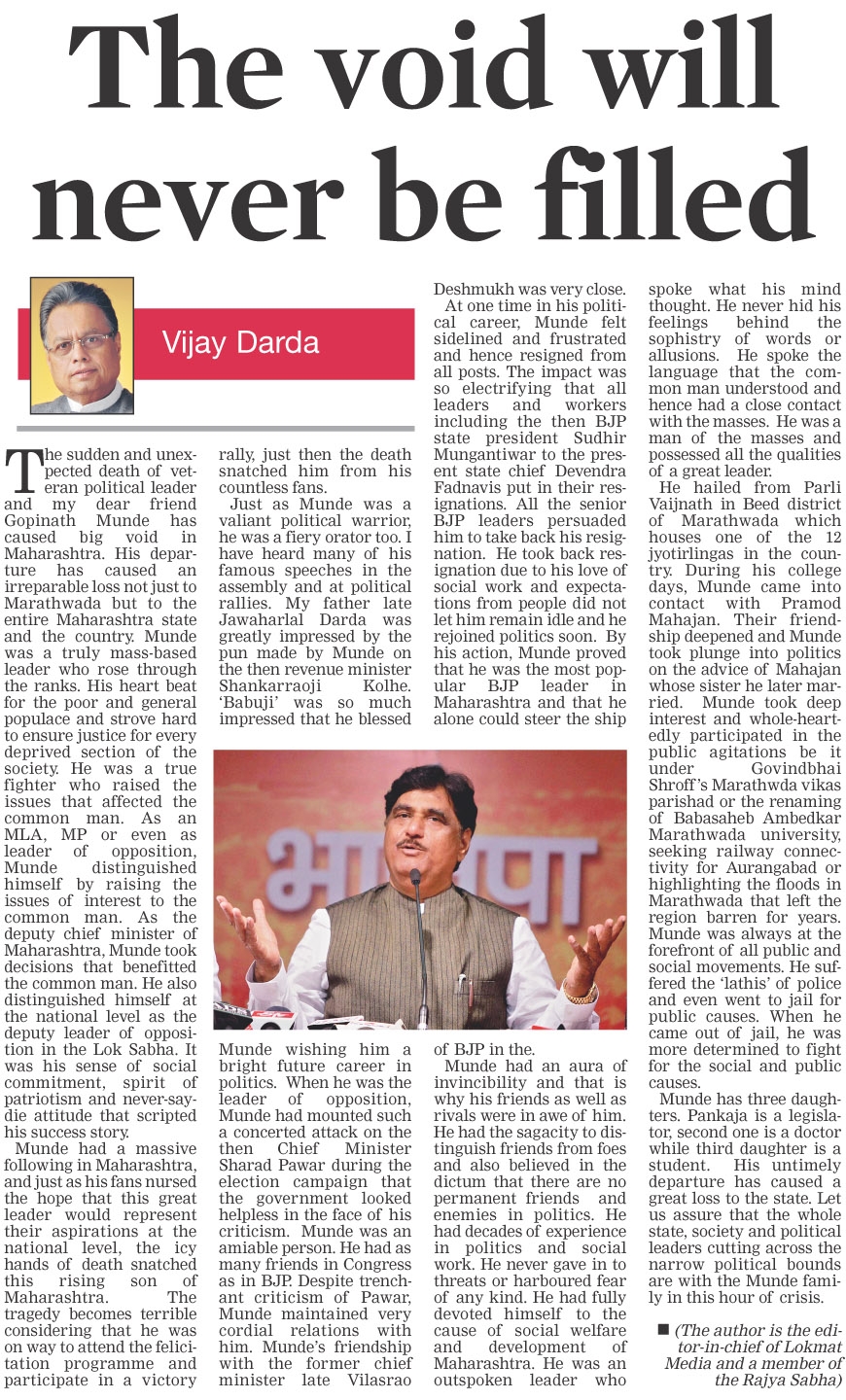 Departures that leave trail of grief