Don’t freak out, face the truth!

If Congress is to be saved, Ghulam Nabi Azad’s allegations need to be seriously considered

Ghulam Nabi Azad’s strongly-worded letter has led to a barrage of furious reactions within the Congress. People who ‘control’ the high command are slandering Azad. Some are saying that Azad left the party because he was not given the Rajya Sabha seat, while others are saying that he was trying to retain his residence in Delhi. On the surface, this may sound true but is it really so? Are the issues openly raised by Azad about the state of affairs in the Congress wrong?

As a journalist, I have always stated that a strong opposition is necessary in a democracy. And only Congress has the capability to give one. If Congress is in the ICU, not only the Congressmen are worried about it but every person who believes in democracy is seriously worried too. There is no doubt that the Congressmen have always trusted and respected the Nehru-Gandhi family. But when the family itself is in trouble and the leadership has failed to find a way out, we have to talk within the family. Exactly two years back, 23 senior Congress leaders, including Ghulam Nabi Azad and Kapil Sibal, were branded as traitors when they talked about self introspection. They were attacked. The caucus, which surrounded the high command, projected the G-23 leaders as enemies!

What happened in the end? The Congress leaders with a large support base left the party one by one. Even Jyotiraditya Scindia, Jitin Prasada and RPN Singh, who were considered close to Rahul Gandhi, left the Congress and joined the BJP. It is not just senior leaders like Kapil Sibal and Ashwani Kumar who left. Even Birender Singh and Rao Inderjit Singh from Haryana, and Hemant Biswa Sharma, who was a big leader in Assam Congress, also crossed over to BJP. Arunachal Pradesh chief minister Pema Khandu was earlier in the Congress. Former chief minister of Karnataka S M Krishna and former chief minister of Maharashtra Narayan Rane also joined the BJP. Those who left were termed power-hungry. But this issue is about the hopelessness of the organisation.

As far as Ghulam Nabi Azad is concerned, I have known him personally for a long time. I remember that Indira Gandhi wanted to send him to Parliament but it was not possible from Jammu and Kashmir. Indiraji called my Babuji, veteran freedom fighter Jawaharlal Darda, and asked him to arrange for sending Azad to Parliament from any seat in Vidarbha. Accordingly, Ghulam Nabi Azad contested from the then Washim parliamentary seat and won. Azad was not only close to Indiraji, but enjoyed equally good rapport with Rajiv Gandhi and Sanjay Gandhi. On the occasion of his marriage, Sanjay Gandhi piloted a plane to Kashmir with a wedding procession. When he was ill, Rajiv Gandhi went to see him not once but thrice.

Azad gained this respect and trust through his own work. Azad, who started his political career from the block level, took the Youth Congress to greater heights and proved his efficiency as a minister in various departments and also as the chief minister of Jammu and Kashmir. I was in Parliament when he was the leader of Opposition. The specialty of Azad, who was very courteous and mature, was that he never hurt anyone with his speech. That is the reason that his relationship with everyone has always been cordial. At the time of his departure from Parliament, you may recall how Prime Minister Narendra Modi praised him.

If such a person devoted to Congress and loyal to the Gandhi family says that leadership is deceiving in the name of internal elections, Sonia Gandhi is now just a leader for namesake, Rahul Gandhi’s PA and guards are taking decisions, and that Rahul Gandhi demolished the system as soon as he took over, then surely things are not absolutely baseless. Those who know and understand the Congress closely know that Ahmed Patel and Azad were very close to Soniaji but they were separated. Is it easy to meet Rahul Gandhi today? Knowledgeable sources state that former banker Alankar Sawai is in Rahul Gandhi’s inner circle and he travels with him always. A former SPG officer K V Byju decides on the political appointments. A gentleman named K K Vidyarthi answers emails and oversees other activities. How many of these people are known to Congress workers? Isn’t this situation dangerous for Congress?

One day, I was asked why so much news of the BJP is covered in Lokmat. I replied that I personally belong to an ideology but Lokmat is the newspaper of the people, and not the mouthpiece of the Congress. My father had said the same thing and also taught me that the responsibility of the newspaper is towards the readers. Party leaders should also be responsible for the country and the party, but right now everything is turning upside down! Barring Ashok Gehlot, Kamal Nath, Bhupesh Baghel, Prithviraj Chavan, or a few leaders like them, how many leaders are left in Congress who can strengthen the party? And do such leaders also get attention? Are thorns not laid in their path? Why so?

Everyone should understand that a political party is not an organisation of saints and holy men. Leaders keep strengthening the party in various ways. If Congress did not strengthen itself while in power or is not doing so today, the BJP or the RSS cannot be blamed for it! They are strengthening their party. The RSS is strengthening itself. And here, Congress is trying to destroy itself. Due to this, the common worker of Congress is seriously worried. No one hears his voice. Every worker is feeling that some people have pushed the party to the brink of destruction. It is important to listen to the truth, and not ignore it. And the truth is that some Congress leaders are weakening the roots of the party themselves. 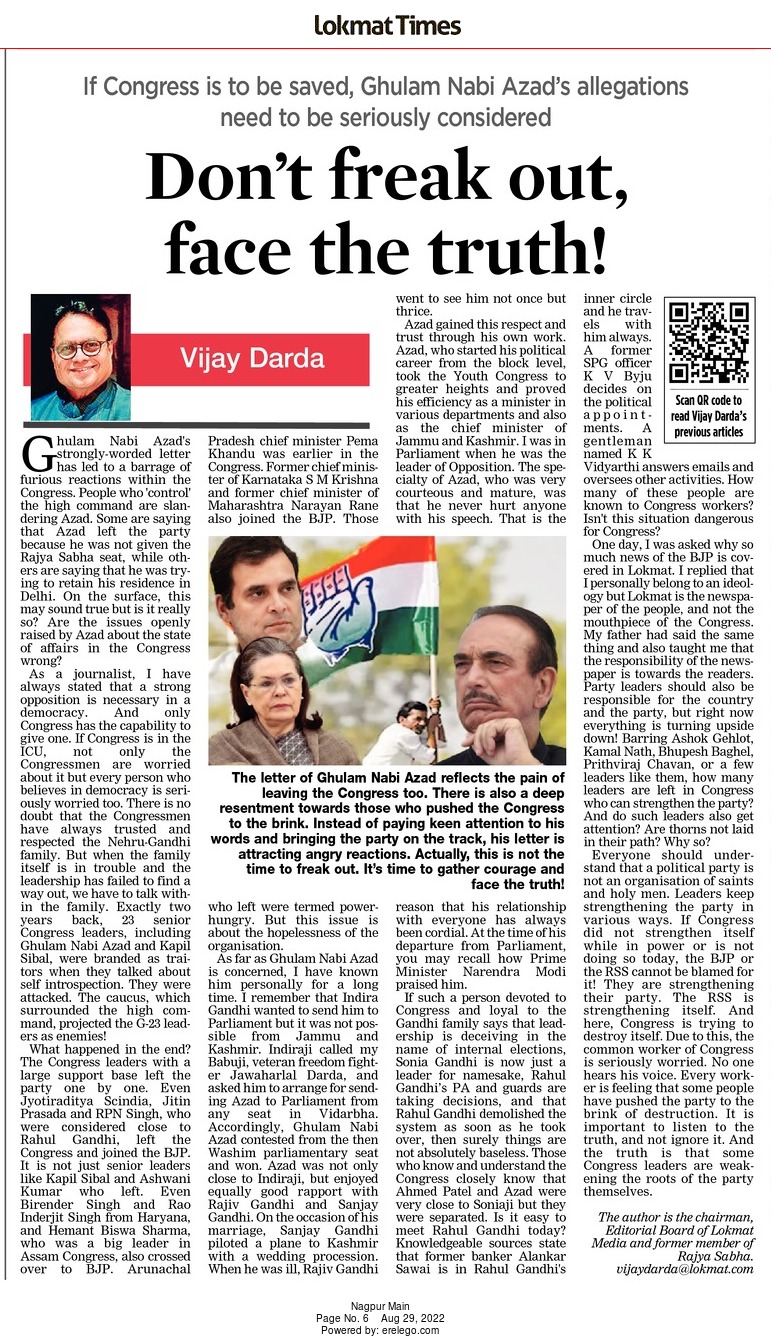 Let this bonhomie percolate to politics

With indomitable courage, we will conquer the world