With indomitable courage, we will conquer the world

Ever since I became aware, I have fallen in love with Diwali! I am greatly fascinated by this festival which radiates energy. From the religious point of view, this festival has its own importance, from the scientific point of view, life cannot be imagined without energy. The more the energy, the more the potential one has to be successful. Diwali is the festival of new hopes, the desire to dispel the darkness from life and the most wonderful symbol of the power of light. That’s why I celebrate Diwali in a very traditional way and get immersed in happiness.

Coronavirus pandemic shadowed Diwali festivities last year. But look at our spirit, it did not take us much time to recover from it. This Diwali, we all openly expressed our happiness. We got this encouragement from the light of happiness. I personally felt that people spontaneously came forward to strengthen the economy with a big heart. Each and every person contributed to the best of his or her ability to strengthen the market. Of course, the government too has its share in this process, but I am talking about the common man, for the market is stronger only when the common man spends money. People bought four-wheelers and two-wheelers in large numbers this Diwali. From clothes to dry fruits, the market was flooded with customers. According to the experts, the business during Diwali this year was estimated at Rs 1.25 lakh crore. The market bought 15 tonnes of gold and the diamond industry did a roaring business. Experts say that for the first time in 75 years, the diamond industry got such a pleasant and wonderful business opportunity!

This Diwali I saw a special social change. People tried to make Diwali better for those who have nothing. People gave food, clothes and distributed sweets to such people. Many people went to places where destitute, supportless old people and orphaned children live. Compassionate service to the needy has also been a tradition of our society, but the war against the corona epidemic has sweetened the relationships. The spirit of cooperation towards the weak has increased. I realised that this time people did not bargain with the street vendors and tried to pay them more than the price quoted by them. You too must have extended a helping hand in this way. I also felt good that the ear-splitting noise of firecrackers was not heard much this time. Some people did burst firecrackers as usual but that too was only symbolic. Most of the people completely avoided firecrackers so that the poisonous smoke of firecrackers could not play with the lives of the people. It is evident that people took care of the atmosphere and climate.

And yes, as in previous years, our Prime Minister Narendra Modi once again reached the border to celebrate Diwali with the soldiers. This has been going on since 2014. This time he was in the Nowshera sector. Every Indian is proud of the fact that his Prime Minister celebrates Diwali with the soldiers. The Prime Minister is the representative of the country, so his gesture symbolises that the whole country is participating in the joy of Diwali along with the soldiers. Our jawans protect the border by facing all the natural calamities. They do not hesitate to even lay down their lives to protect the honour of the country and the tricolour. Posted afar from their families, away from their parents, wife and children, these jawans actually are not able to celebrate any festival. Be it Diwali, Eid, Christmas, Baisakhi or Hola-mohalla, they stand fast on the border. In such a situation, when the PM celebrates Diwali with them, he instills courage, energy and enthusiasm among the soldiers and paramilitary personnel.

When he meets the sportspersons who have brought glory to India in the Olympics, there is a sense of encouragement in that too. And rightly so. It feels good when this same sentiment is seen in the country for our farmers and industries. Sportspersons play for the country and the tricolour. The farmers toil to provide foodgrains, fruits and vegetables to the whole country. For them, droughts, floods and pest attacks are only natural calamities! There was a time when we were dependent on others for foodgrains but now we are fully self-sufficient. Despite all odds, our industries are busy making the country self-reliant in terms of employment. We are committed to realise Modiji’s slogan of ‘Make in India’ and ‘Made in India’. It is not an easy task to give impetus to and re-energise each and every front or sector though.

I am happy that on one hand, Modiji is paying obeisance to the deities in the lap of the Himalayas, trying to protect the culture, and on the other, he is embracing the Pope with love in Vatican City. This is the essence of the values of our country. It is this quality that makes us a country that promotes the idea of universal harmony, unity in diversity and Vasudhaiva Kutumbakam. The Lokmat Media had recently organised the National Inter-Religious Conference in Nagpur, in which spiritual leaders of all religions participated and gave the message of peace and harmony. In fact, our characteristic quality is that all colours are ours, all religions are ours and all are ours. This world is ours. All the people living here are ours. We know how to respect each other. We Indians know how to spread happiness! 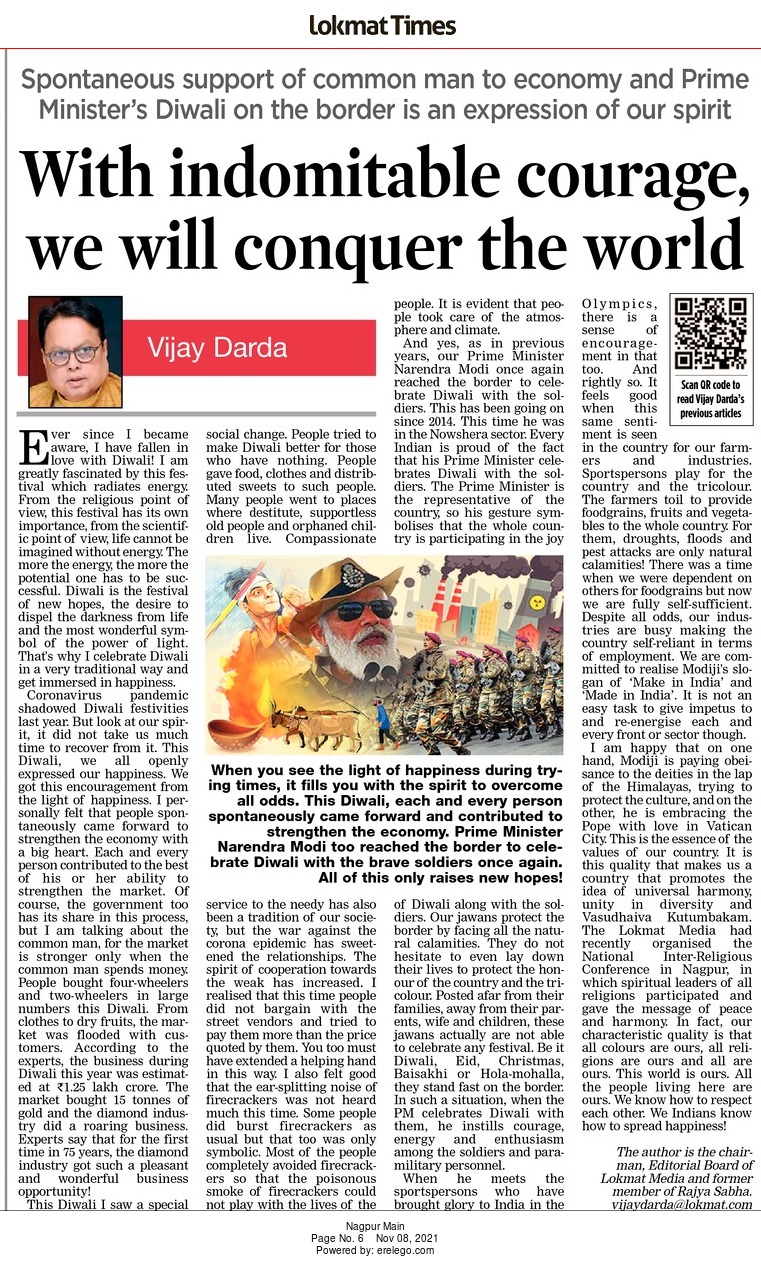 Be cheerful to produce antibodies!