Not long ago, the image of India in the West was that it is a country of elephants and snake charmers. No doubt it was true that elephants did walk and still walk on the Indian streets, as did the snake charmers enthral people and still continue to do so with their skills. But then the India story changed for the West. The advent of a neo-liberal economy in the 90s marked the beginning of this transformation. Riding on the wave of information technology, India became a knowledge based economy as its technocrats earned the grudging respect of their peers all over the world. The major political change happened when India announced its arrival on the geo-strategic stage as a nuclear power. India was a democracy that had a strong growing economy as well as the nuclear muscle that made it a regional super power.

But then there is a major modification in this image and a drastic alternation in the India story as narrated in the West. Through my interactions with a wide range of persons belonging to different cross-sections in New York I am getting a new slice of Indian life. For most people here, India is a country that is fast regressing into a socialist era that has been discarded elsewhere as unworkable. The Food Security Bill that threatens to add to the fiscal deficit at a time when the Indian rupee is fighting an uphill battle for recovery is seen as one such step coupled with a string of laws like the Land Acquisition Bill that seems to have the potential of hiking the costs of industrial projects.

Above all, events like the government’s attitude on the Vodafone case, the cancellation of the 122 licences after the telecom scam, as well as the uncertainty that looms after the coalgate scam have all had the cumulative effect on the American psyche as well enterprising persons of Indian origin that in its current state of affairs India is surely not the right destination for investment. Besides, the country’s image abroad has been dented by the Commonwealth games scam, the mining scam involving the Bellary Reddy brothers, and frequent media reports that there is growing corruption in the country.

It is not just the investment scenario that makes the Americans bearish about India. For them other headline grabbing events like the December 16th gang rape and murder of the 23-year old and death of several children due to the adulterated food in Bihar’s mid-day meal scheme are all serious events that lead to questions about the quality of governance in India. So, for them India becomes an unsafe tourist destination, as well as a country in which the system cannot be trusted to take care even of the innocent school going children.

The manner in which the western media reports these events also convinces them that these are not aberrations and in a country as huge as India with a diverse population such incidents are an exception and not the rule. The negatives about India seem to be dominating the positives, and right now this appears as a disturbing trend.

For me as an Indian, and a parliamentarian and a media person, this also appears more as an outcome of the lack of efforts to project the right kind of image of the country in the west. For instance, it disturbs me that one important newspaper like the New York Times that takes pride in its professional journalistic approach to global events is virtually engaged in systematically distorting India’s image. More disturbing than this fact, is the realisation that there is no corrective effort.

We in India are all aware of the realities, and know well that shortcomings apart and not-withstanding the temporary swings in the economy, the India growth story is intact. In fact, by comparative reckoning, the Indian economy has fared much better than several others in these days of global down turn. Very surely the doubts expressed by the people here in New York reflect their genuine concerns, and it also emerges that they are keenly engaged with all kinds of events in India. Their awareness of some of the details, has even surprised me.

But there is a silver lining among the dark clouds of thoughts that are going through at this stage. It is their genuine interest in India, and strong desire to remain engaged with it. Given the right kind of atmosphere they would still like to invest in India. So for me, this negativism is also an opportunity. Essentially it is an image correction opportunity.

The basic features of the Indian economy have always remained attractive for an investor. It is a huge market for any product, and by their intrinsic nature the Indians are good and choosy customers. Nothing alters this essential characteristic, and the timing of the return to the growth path may appear uncertain yet, but there is no doubting the certainty that it would happen. All the systemic distortions that appear to scare the foreign investors are bound to get corrected over time, and the Indian administrative as well as the governance apparatus has shown the necessary resilience for self-correction.

Of course, this is an election year, so some amount of political uncertainty is bound to be there. But then over the decades, the political system has matured to such an extent that changes in the political hues of the regime do not mean any major overhaul. We have had all kinds of governments in the past, and there has been more or less a continuity in major policies.

However, the Gujarat chief minister Narendra Modi has not been able to cut much ice with the people here, inspite of a high voltage media blitz. People here see him as a person who does not have any respect for human life, and this disregard is irrespective of the religion, caste or creed of a person. Indeed, they also wonder as to how a person who is tainted by the post-Godhra riots of 2002 can even be considered to be a candidate for the prime minister’s post. But this does not prevent the international arms of the RSS and the BJP to launch a vicious propaganda against the young Congress vice-president Rahul Gandhi alleging he is a non-serious part-time politician. Well versed in the art of propaganda, they have a field day here, as the Congress party does not mount any counter-offensive. This is also something that worries the people here.

There is a sense of excitement in New York about prime minister Manmohan Singh’s visit to the United Nations General Assembly and it is expected that his meetings with President Barack Obama and the Pakistani prime minister Nawaz Sharif will be landmark political developments in the context of Indo-US and the Indo-Pak relations. This visit should add to the image correction exercise.

Right from the immediate post-independence days when the departing Imperial powers were sceptical about the Indian ruler’s capacity to govern, the West has been doubting the India story. For the last 60 years, we have been proving these doubting Thomases wrong. As I go through the streets and corridors of New York, my faith grows stronger that we shall prove these sceptics wrong again. India would once again appear as a safe investment destination, and those who are holding back their horses would be gladly enjoying their Indian successes in the days to come. 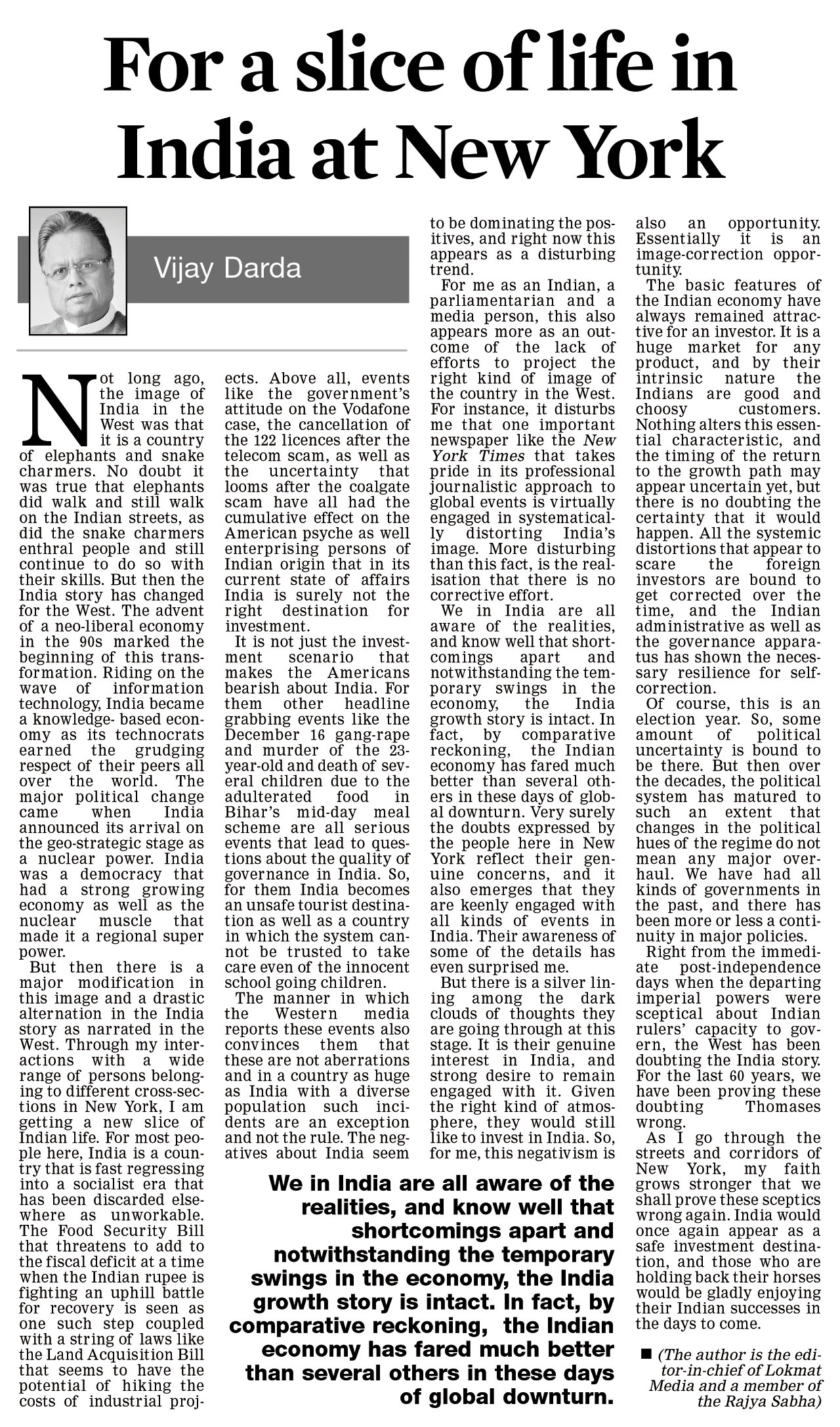 We all will survive only if humanity survives!

From Bajrangi Bhaijaan to Geeta!