Through his long drawn election campaign, Narendra Modi promised to redeem the economy from the slide of the UPA-era. He had a long list of the acts of omission and commission by the previous regime, and he roundly slammed them for all these. His oratory won the day for him, and now that he has the power and opportunity to conclusively demonstrate that he can make a difference, he has launched this “Make in India” mission.

The who’s who of corporate India has supported him, not just through words, but by their physical presence at the launch event. In fact, they have been sold out on his leadership qualities right from the days of the “Vibrant Gujarat” when they would shower unqualified praise on him and describe him as the right kind of Prime Minister material. If we can say, the atmospherics have been right on the dot. There has been not a single discordant note.

As if this was not enough, the Indian scientific community also proved its worth by delivering the successful Mars Orbiter Mission as the Mangalyaan landed on the red planet with effortless ease in its maiden attempt. All others failed in their first attempt, and had to try again and again. Besides this, the fact that at $67 million this mission has cost less than a sci-fi Hollywood movie Gravity (that cost $100 million) has conclusively established that India has the skill and the manpower to deliver a global quality hi-tech product at highly cost-effective and competitive prices is also a signal of its manufacturing prowess. So, there is a kind of credible basis to dream that India can be a global manufacturing hub, and not just a marketplace with its growing middle class of millions of aspirational customers.

But there is a big problem. India fares very poorly in the global ranking for the ease of doing business among all countries. Modi himself wants that this ranking should change and India should be among the top 50. He also knows that this is easier said than done. Actually it is the politics of India that shapes the most insurmountable hurdles for doing business here. Take the case of Modi’s party. For the 10 years that it was in the Opposition, the BJP stubbornly stalled all measures that could have improved the ease of business. For instance, it opposed Foreign Direct Investments in the multi-brand retail sector, as well as the insurance business. It opposed the enactment of a single GST that could have simplified taxation structure and also blocked the new land acquisition Act that the previous government wanted to bring in desperately. Even after it has come to power, it has not been able to decide on the gas pricing formula, although it had promised that this would be done by September 30. Now, it has come up with a new November 15 deadline. The formula was decided by the UPA government, and naturally the BJP-led NDA government would like to go one up, and that’s the obvious politics in this game.

Given the kind of political approach it followed during its years in Opposition, whatever be Prime Minister Modi’s personal inclinations it is hardly expected that the same apparatus would suddenly change gears and start moving in a different mode. Then there is the political culture of crying foul and scam at every stage. Without holding any brief for the telecom or the coal sector companies, we can safely assert that the post-facto objections from the national auditor and the apex court have done irreparable damage to the economy. Now, there is no guarantee that a contract or a deal that seems valid enough on the date it is signed, can be annulled in India at a later date and the party made to suffer. If the contract signed is bad in law, and a fine is to be paid, then is it not fair to expect that both parties should suffer? But after the apex court allowed the four coal blocks to remain functional, one erring party (the coal companies have to cough up Rs 10,000 crores) and the other erring party (the government) gains. But then there are huge uncertainties in the coal sector as to the way forward, with their consequential impact on the power and steel sector. Power deficit is one of the crippling contributors to sluggish manufacturing scene.

Even as politics stymies, India’s ease of doing business there is no doubting the essentially strong elements of the economy that can really play a transformational role. Manufacturing contributes just 15 percent of the GDP, and considering the army of youths that are entering the job market, there is an ambitious target to raise this share to 25 percent in the years to come. This by itself has the potential to ensure that our growth rates remain in the 8-10 percent bracket, and we are able to compete with the other manufacturing hub –China — that incidentally launched its ‘Made in China’ programme almost simultaneously. The fact that Modi has identified at least two dozen sectors like defence, auto components, wellness, solar power along with other areas to be tapped for this mission shows us that the only constraints are the ones that are created by our failings. In reality, we transform the slogan from red tape to red carpet into reality then there is nothing that would scale down the size of our achievements.

Indeed, defence manufacturing could be the next big sunrise sector as it would not only strengthen the economy but also enhance our strategic capabilities. Accepting the philosophy that a sound economy and effective strategic preparedness are two sides of the same coin for a nation’s global prowess, we can certainly make a success of the “Make in India” mission. In this context, the argument made by the Prime Minister that FDI should first mean — first develop India, and then foreign direct investment needs to move from the stage of rhetoric to reality. Indeed, “Make in India” is a mission that does not afford any possibility of failure, it has to succeed. 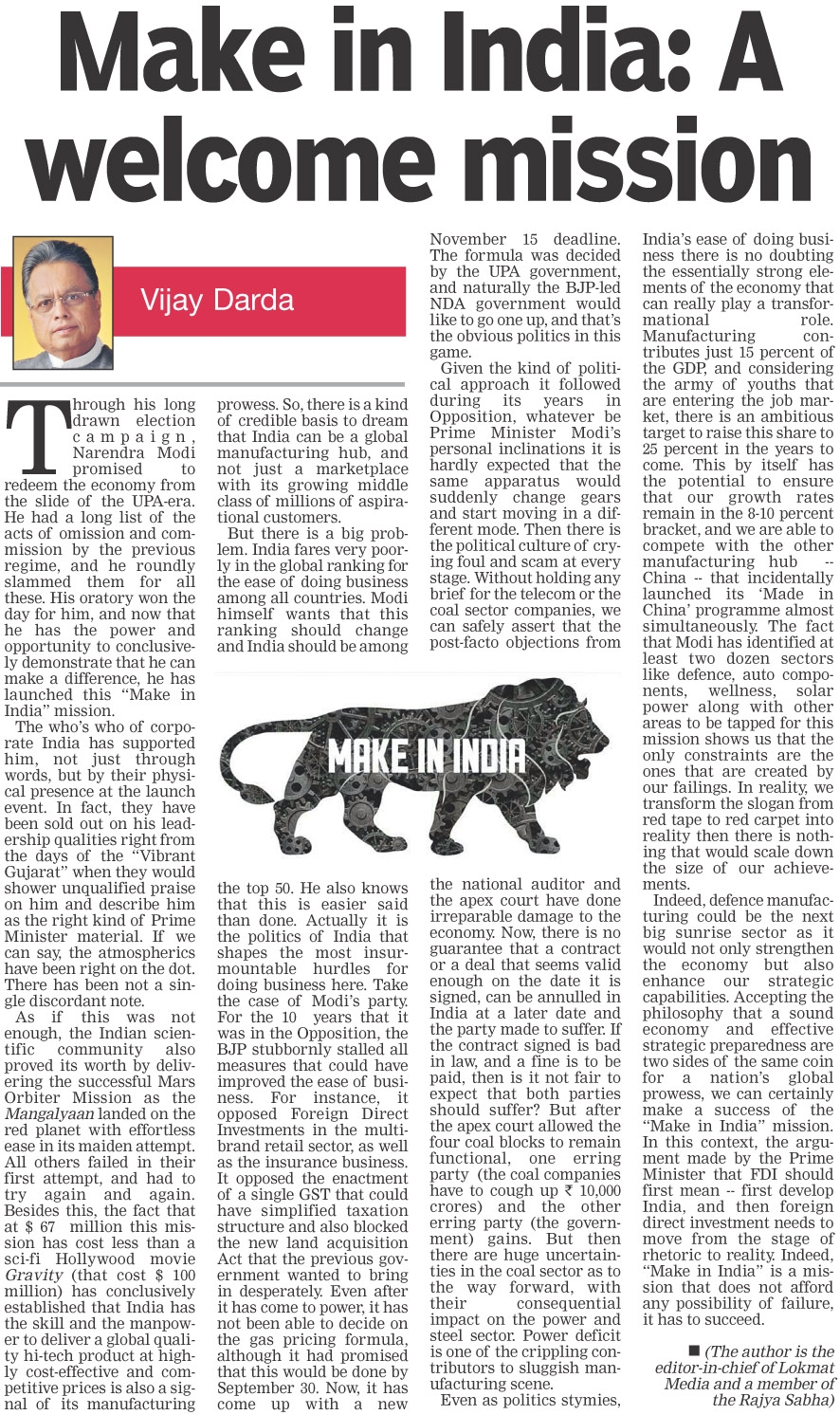 Post-Pathankot: Not by words alone