Dragon is interested in our large consumer market, but its investment in our country is still mere 0.5 per cent

Mahabalipuram in Tamil Nadu had been the historical port for trade between India and China in ancient times. So when the Chinese president Xi Jinping and our Prime Minister Narendra Modi spent two days together at this same ancient town of Mahabalipuram, it sent out a message that the friendship between the two countries is flourishing. Well, is it really?

If we analyse, we will find that China has emerged in the world as a nation no one trusts. An air of apprehension is always there. Amid the possibility of friendship, it will be no less than a delusion to expect that our pending issues with China will be resolved. Right from attacking India during the Jawaharlal Nehru era in the guise of popular slogan ‘Hindi-Chini bhai bhai’ to supporting Pakistan on the issue of abrogation of Article 370 in Jammu and Kashmir, China has proved that it has neither been our friend nor does it want to be one.

China’s focus is only on our consumer market. It wants to sell to us its goods as much as possible. In fact, China has made tremendous progress in the last 40 years. It first laid a network of cottage industries in the entire country and then started to produce so much through the industrial revolution that it became necessary for it to explore and expand the market. There is no sector in which China lags behind in production. You will be stunned to see the size of its factories. In many sectors, it has become the world’s largest producer. It is in this background that it introduced the ‘One Belt One Road’ project so that 152 countries of the world can be connected. Although India has kept itself aloof from this project, most countries have joined it. China also started lending money to many countries to encourage consumption of its products. Its business has expanded far and wide but America has emerged as an obstacle in its path. A trade war is going on between the two countries.

In such a situation, China is forced to extend a hand of friendship towards India. If China loses to the US in terms of trade, it will surely look for a market to make up for it and there can be no better place than India. China wants its exports to India to go up to $200 billion. In 2018-19, the trade between the two countries amounted to $88 billion, taking India’s trade deficit up to $63 billion. India mainly imports electrical appliances, organic chemicals, etc., from China, while it exports minerals, some medicines and cotton to China. The current estimate is that the trade between the two countries will soon reach $100 billion mark. India wants China to not only buy more goods to narrow down trade deficit, but also invest in India. India argues that its position is strong in IT, horticulture, textile, chemical, dairy production, and if it has registered a significant presence in the world, China should also buy them. India has submitted to China a list of 380 such products.

China sometimes assures and sometimes maintains silence. In India, China’s investment is about $8 billion right now. Statistics reveal that only 0.5 per cent of the investment that China has made in the whole world is in India. Though China has promised a total investment of $20 billion, India wants it to be increased to at least $50 billion. But this does not seem to be possible immediately, though India is constantly exerting pressure on China. However, this pressure can work in the present situation as China is at cross swords with the US. But only pressure will not work.

If you have to compete with China, India will have to make its mark as a country producing quality products at low cost. Prime Minister Narendra Modi has talked about creating a better atmosphere for industrialists, but he will also have to put it in practice. We will have to enter the sector that fulfils the requirements of China. For example, China imports $450 billion worth of electrical machinery and $97 billion worth of medical equipment every year. There are many other sectors where China’s imports are high. We will have to explore the possibilities in these sectors.

As far as the border dispute with China is concerned, it will not have much impact on trade. Both countries have formed committees to resolve these disputes. The officers of these committees keep negotiating and the business goes on! Yes, India will have to always keep in mind that China will not leave any chance of hurting us because it sees India as its main rival in future. It is aware that India is the only country with a large consumer market, and which is also mobilising resources. And in due course of time, India can be in a position to pose a challenge to China.

It is an undisputed fact that China is interested in our market. It wants to sell maximum goods in our market. On the other hand, India plans to reduce its trade deficit with China. At present, China exports more goods to India but imports very less. The Chinese investment in our country is very less too. 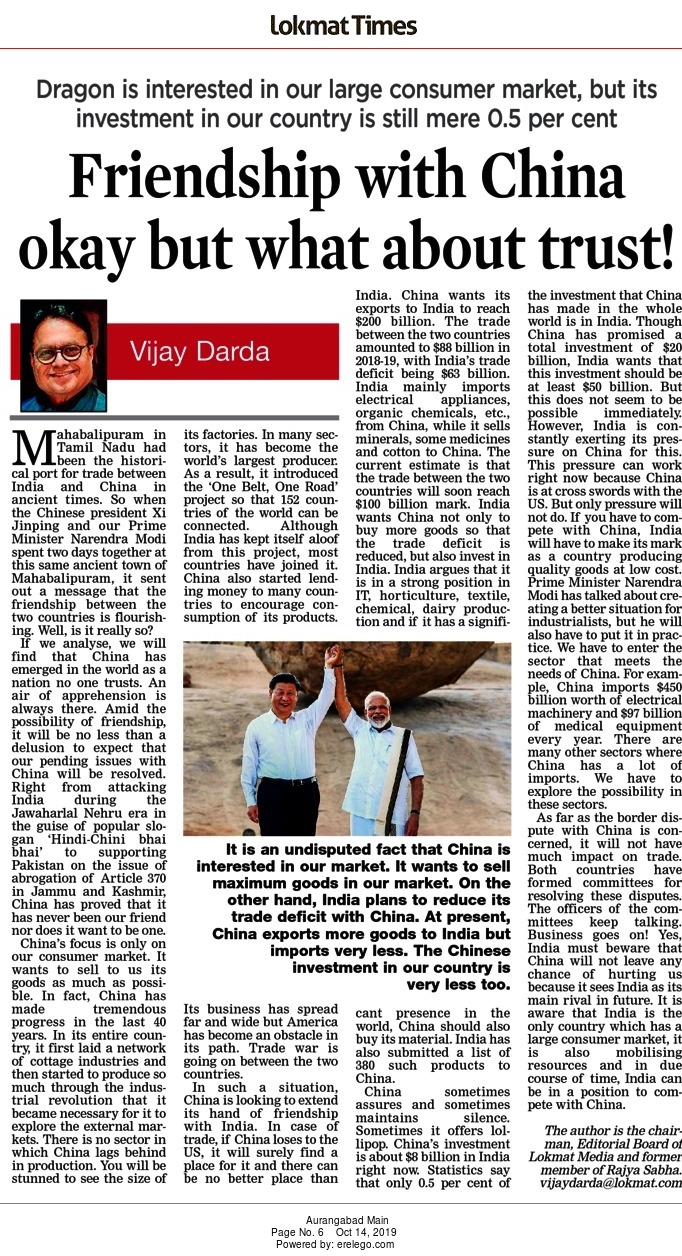 Russia has stood by India’s interests

Who will rein in the dragon?