Let me congratulate Prime Minister Narendra Modiji on completing the first year of his second term in office. I can understand his intent for making India self-reliant. He wants to make India self-sufficient and self-dependent. He coined and gave this slogan in his first term as well. It has to be considered why it did not succeed completely? What were the problems? The NITI Aayog had prepared a blue print too but the initiative did not achieve desired success.

Rather, I would like to say that even those who established industries, influenced by blue print, could not succeed. The industries established in the defence sector also faced a lot of trouble. The reason for these problems is that India imports from abroad even the things that are produced locally. Union MSMEs minister Nitin Gadkari himself lodged several complaints pointing out this issue. Gadkari says that our dependence on China is such that we are buying ice cream spoons and sticks used to make incense sticks too from China because our forest policy on bamboo is not favourable. On the contrary, China’s policies are such that it has dominated every field of human endeavour. India imports almost everything from China. China has entered our individual spiritual spaces. The Gods have become Chinese too.

Idols of the Gods kept in our homes and the incense sticks to worship them are also imported from there. The ingredients of Diwali crackers and decorations also come from China itself. If a motorcycle is being produced in our country, its parts come from China. The chemicals required for medicines also come from China. Steel cables required for the bridge are imported from China. Even metro coaches come from China. Look at the irony that the world’s largest statue of Sardar Vallabhbhai Patel, symbol of our national self-respect, also came from China. We only assembled its parts here! That is why we also said – Sardar Patel Made in China! Why can’t we produce all these things? Don’t our industries have this capability? Of course, they have. The need of the hour is to inspire our entrepreneurs, help them realise their dreams and empower them financially.

Let’s keep one thing in mind that if China is to be defeated, we will have to increase our potential. We cannot undermine their potential but we can develop ours. We have to work hard. We have to bring quality in our work and product, only then can we bring self-reliance. Only with self-reliance can we establish India as an economic powerhouse. I have said many times during the discussion in Parliament that now war will be fought more on economic front than with weapons. When we are financially powerful, no one will be able to intimidate us. China is trying to browbeat us to pressure us. Whenever its economic condition deteriorates and there is a possibility of mass rebellion, it creates a war-like situation to divert the public attention and pre-empt mass rebellion. Even in 1962, its economic condition had deteriorated and there was a possibility of mass revolution, so it started a war.

But China is far ahead of us despite the weak situation. China’s GDP is currently around $14 trillion while our GDP has not reached even $3 trillion. In China, the average monthly income of every person is Rs 58,000 as against Rs 11,000 average monthly income in India. If we look at the figures of the last 10 years, China has an average gold reserves of more than 1,000 tonnes whereas India has only 500 tonnes of gold reserves. America is at the forefront with an average reserves of 8,000 tonnes of gold.

China is second only to America in terms of economic strength and is moving fast in terms of technology. China built an 8-lane 55-kilometre bridge over the sea between Mainland and Hong Kong at a cost of $20 billion in just seven years. Now look at the situation here. It took us 10 years to complete barely 5.6-kilometre Bandra-Worli sea link. Our engineers have tremendous potential and they can also do such a great job but the reality is that we have a lot of disruptions because we are a democratic country. To speed-up construction, it is necessary for all the stakeholders including environment, human rights and judiciary to create an atmosphere of coordination and cooperation. Decision-making will have to be expedited.

If we want to beat China, we have to end our dependence on it. We must stop using Chinese products. I would like to clarify here that I do not hate the Chinese brothers and sisters. We are the people who believe in the philosophy of Vasudhaiva Kutumbakam, which means the whole world is one family. So what we are really opposed to is China’s policies. Therefore, we should immediately stop using TikTok and all other Chinese apps like it and set a one-year target to completely stop using Chinese products.

So the question is:

Are you ready for this?

And the people’s answer is…

Yes we are! We have exhibited our determination time and again, contributed to nation building, made sacrifices for the nation and we still will! 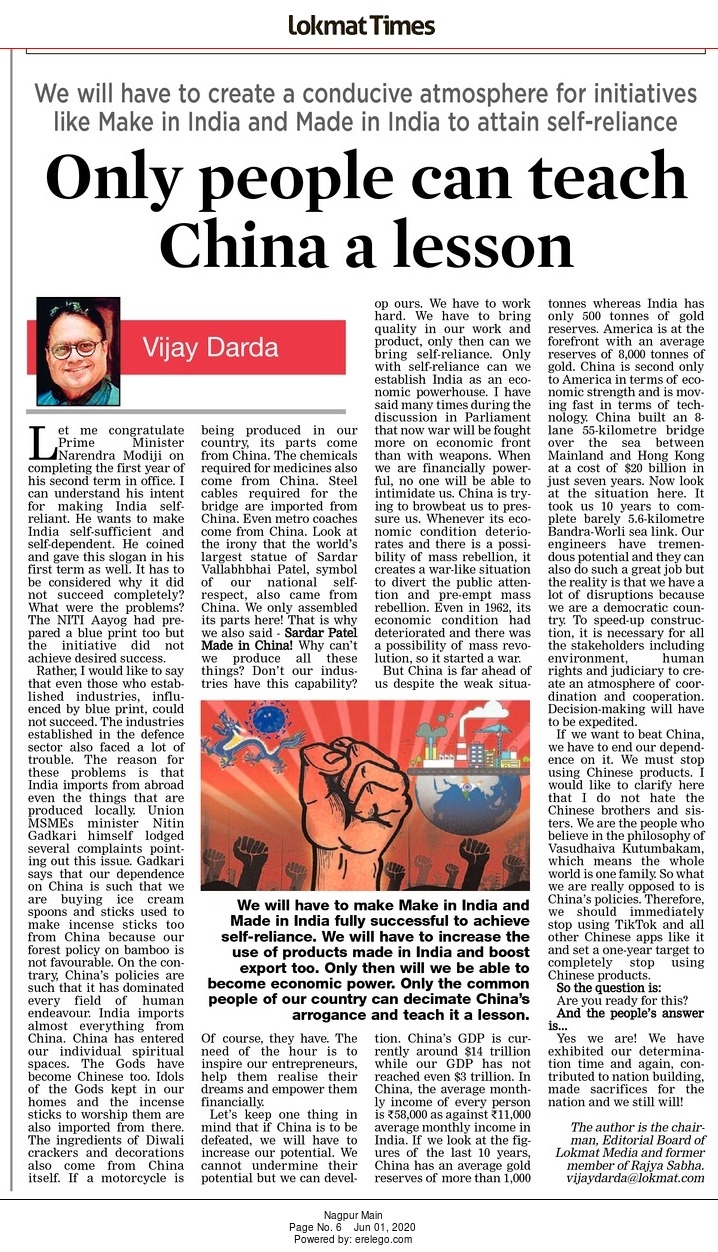 Have we really got complete freedom?