While Narendra Modi was waiting for the US President Donald Trump at the event of the American-Indian community in Houston, many Indians felt that our Prime Minister was being made to wait. The general feeling was that Trump should have arrived earlier or together, but diplomatically the story was different. The hosts of this event on American soil were Indians who have settled there. But Narendra Modi, being the Indian Prime Minister, stepped in as the host. When Trump arrived, Modi as a host invited him to speak, having praised him and launched him as the presidential candidate for the next US election in chaste English. The Congress objected to it saying this tradition is not right. However, Modiji does not care about traditional boundaries. He continues to blaze new trails.

At the very beginning of his speech, Trump spoke of the similarity between these two great nations. He said the Constitution of America and India starts with the same three beautiful words ‘We the People’. This can be termed as a significant message for the world. However, it is important to mention here a historical anecdote of both the countries. In 1492, Columbus set out from Europe to find a sea route to India but reached an island near America. He thought he had reached India. On some other island nearby, he found light red skinned tribals. Columbus called them Red Indians. Later, another investigative traveller Amerigo Vespucci told Europe that it is not India. After that the area was named America after Amerigo. Europe had ruled there for a long time. In 1776, the United States declared itself independent as the United States of America. After that, the world knows the story of its progress.

Today the Indian community is making its presence felt in the same America. About 50 lakh Indians are living in America and they certainly have contributed significantly to its progress. Today, the CEOs and the MDs of big American companies are Indians or of Indian origin. According to an assessment, Indians are at the forefront of the ethnic groups living in America. The Chinese youths also reach there in large numbers to study, but Indians get jobs quickly. India’s penetration in politics is also a factor to reckon with. There is a substantial section that wants a close relationship between India and America.

Due to the influence and number of Indian people, political parties also want the support of Indians. Trump also wanted to attend Houston’s ‘Howdy, Modi!’ event. It was a diplomatic victory for Narendra Modi. This was the first time that a US President arrived at a community event. When Narendra Modi launched him and showered praise in chaste English, he also made it clear in his speech in Hindi later that India will not heed any advice on the issue of Jammu and Kashmir, giving a befitting message to Pakistan. Not only this, it was also a diplomatic master stroke to make Donald Trump walk around the stadium with a clenched fist. It can be described as an expression of friendship. In fact, Modi trounced Pakistan on American soil. It must have been the biggest shock for Imran Khan, who too was in America at that time.

While people are praising Modiji’s speech, some people are also questioning whether it was appropriate to say ‘everything is fine in India’ in various Indian languages? I consider it completely appropriate. I believe that we have many problems here that we have to deal with. We have to manage our economic situation; we have to improve social conditions. Things are yet to be normalised in Jammu and Kashmir. There are many challenges, but we have to fix them ourselves. No other country has anything to do with these challenges. We can not wash dirty linen in public and despite our own set of problems, we have to put up a brave front to say in unison that ‘everything is fine in India’. What Narendra Modi said was absolutely right. His outburst against terrorism was also justified. It is the biggest win for Modi that even Trump had to mention about the menace of radical Islamic terrorism.

America knows very well that it needs India’s support. India alone has the strength to stand against China. Moreover, nobody can deny India’s bigger role in Afghanistan. Yes, it is also true that America’s policy has been to use Pakistan as cat’s paw for years, but now the situation has changed. India is becoming stronger and the Indian community has a significant penetration in America, right from technology to business and politics. In such a situation, India’s influence is bound to increase further!

Some 80 years ago, the great American scholar W Norman Brown had said that after gaining independence, India will grow into a powerful nation. Today, India is so powerful that even America is supporting it. Trump’s resolve in Houston to fight radical Islamic terrorism amply demonstrates India’s clout. 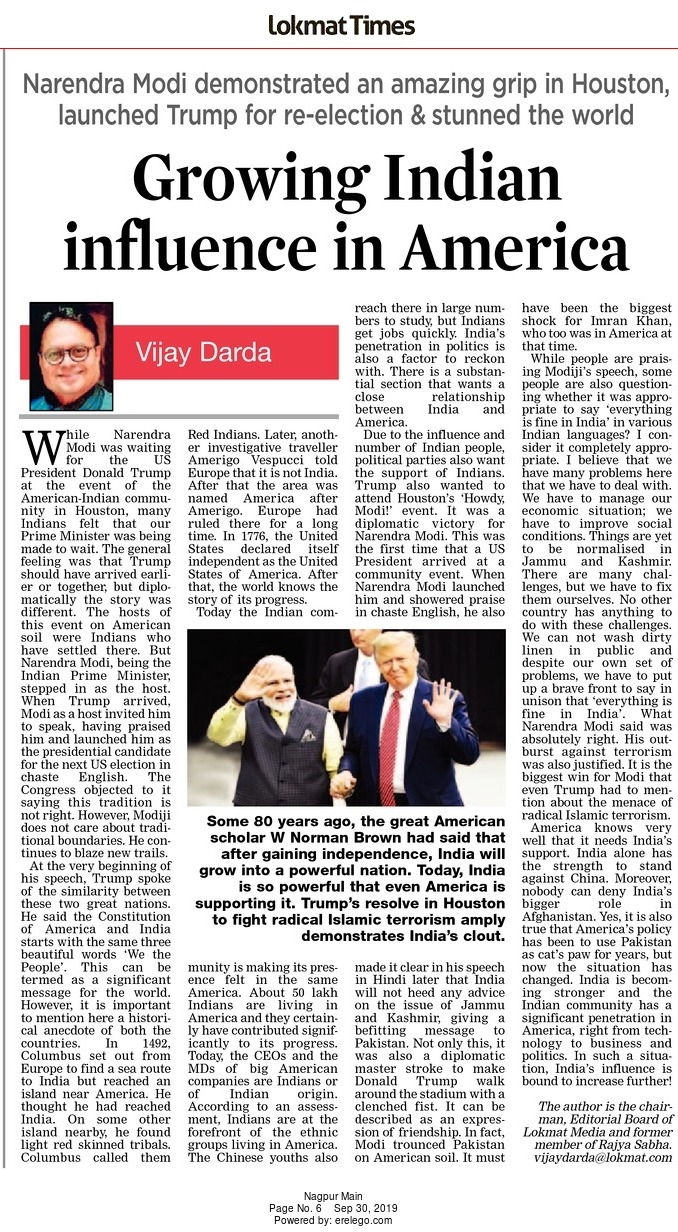