Amid all the hue and cry over sexual harassment cases in high places, it seems to have been forgotten that five states are in the midst of elections that could very well define the agenda for the next Lok Sabha elections in 2014. In fact, by the time the next week’s column appears the people’s verdict in five states — Madhya Pradesh, Chhattisgarh, Rajasthan, Delhi and Mizoram — would be known. It has been a long wait considering that the first phase of polling for the 18 seats in Chhattisgarh was held on November 11.

But just as the journey in the search of any destination is instructive in itself, similarly the campaigns for the elections to the five states have told us several things about the state of our politics. Quite obviously, in a 24×7 media driven political environment, the prime focus has been the Gujarat chief minister and the BJP’s prime ministerial aspirant Narendra Modi. In turn, he has also made all out efforts to convert these five different elections into a referendum between him and the Congress vice-president Rahul Gandhi. Following this script, political commentators have turned this into a semi-final contest before the finals in May, 2014.

A significant trend that seems to have emerged from this more than six-week-long campaign is that the law of diminishing returns has become fast applicable to Narendra Modi as the star campaigner for the BJP. He does have his devoted fans, but then among the ones who are doubtful about him, or among those who still want to decipher him and his politics, he has developed the critical element of campaign fatigue. For someone who aspires to take over the mantle of the ever prime ministerial Atal Behari Vajpayee as the most popular campaigner of the BJP, this election campaign has shown that his oratory falls short of weaving the magic that impresses those opposed to the party’s ideological positions. Modi has been drawing smaller crowds as the campaign progressed, and leave alone impressing naysayers, but has even managed to depress his own supporters, who have started to doubt as to whether he is prime minister material or not.

In sheer political terms, and given the anti-UPA hype and hoopla created by the Opposition, the Bharatiya Janata Party should be making a clean sweep of the four states Madhya Pradesh, Chhattisgarh, Rajasthan and Delhi. The first two states are ruled by two chief ministers who are the BJP’s mascots for good governance. In Rajasthan, they have been telling us that Vasundhara raje Scindia is poised to make a comeback, and in Delhi they have held their hopes high on a three-term anti-incumbency against the Congress chief minister Sheila Dixit. In the Hindi heartland of political calculus, Mizoram does not count for much. So, a 4-0 score for the BJP is something that has been predicted by the opinion polls, and has been seen as a smooth target by the strategic masters of the party.

However, half way through the battle this does not seem like a settled conclusion. The wise electorate of the country that has the habit of upsetting the best laid political plans of any party or leader have voted in a manner that has left the politicians, pollsters and pundits dazed. In the voting for Chhattisgarh and Madhya Pradesh, held so far, there has been an unprecedented voter turn-out going beyond 80 percent in some constituencies, but touching an average high of 70+ percent in most constituencies. This is something that should make all of us glad in the first place, because in the 18 constituencies of Chhattisgarh that went to polls in the first phase, this high voter turn-out has come in defiance of a boycott call by the Maoists. The humble unarmed tribal has proved that he is the strongest defender of our democracy against violent forces that do not believe in the Constitution of the country.

Now, normally, the traditional wisdom of the pollsters and political pundits in the face of such a turnout is that this is an anti-incumbency message. However, when it comes to the earthy wisdom of the rural Indian voter, all such wisdom can be turned on their heads. Besides, there is another aspect that cannot be ignored. This is the functioning of the Election Commission, and its effort to encourage greater participation of the voters in a free and fair polling process. So, practicing politicians are willing to agree that this high turnout is also due to pain-staking efforts of the EC to have properly updated electoral rolls, and to get the voters to the polling booth, by distributing the voter slips through the official machinery, instead of leaving this task to the mercy of the contesting candidates.

Naturally, we have to wait till next Sunday to have the people’s verdict, and there is hardly any point in speculating about the tally in different states. This is task that is best left to the bookies and the operators in the satta market, who claim to have some kind of universal expertise in predicting the outcome of every event — from a cricket match to an election. But from the Congress standpoint, there is something to cheer. When the campaign began, it was virtually written off in each of the four states. But then as the campaign progressed, it started getting back into the reckoning. Here lies the strength of an old political institution.

It is obvious that when the verdict comes next week, more than the fate of the state governments would be decided. Depending on the score, a 4-0 or 2-2 or whatever, the shape of the contest for the May, 2014 battle would be decided. The wait for the verdict has been long, and in some ways tiring. But one thing is sure that irrespective of the outcome, there can be no letup in the battle for the next phase. That battle has to begin almost without a break. The verdict will not offer a breather to anyone winner or loser. 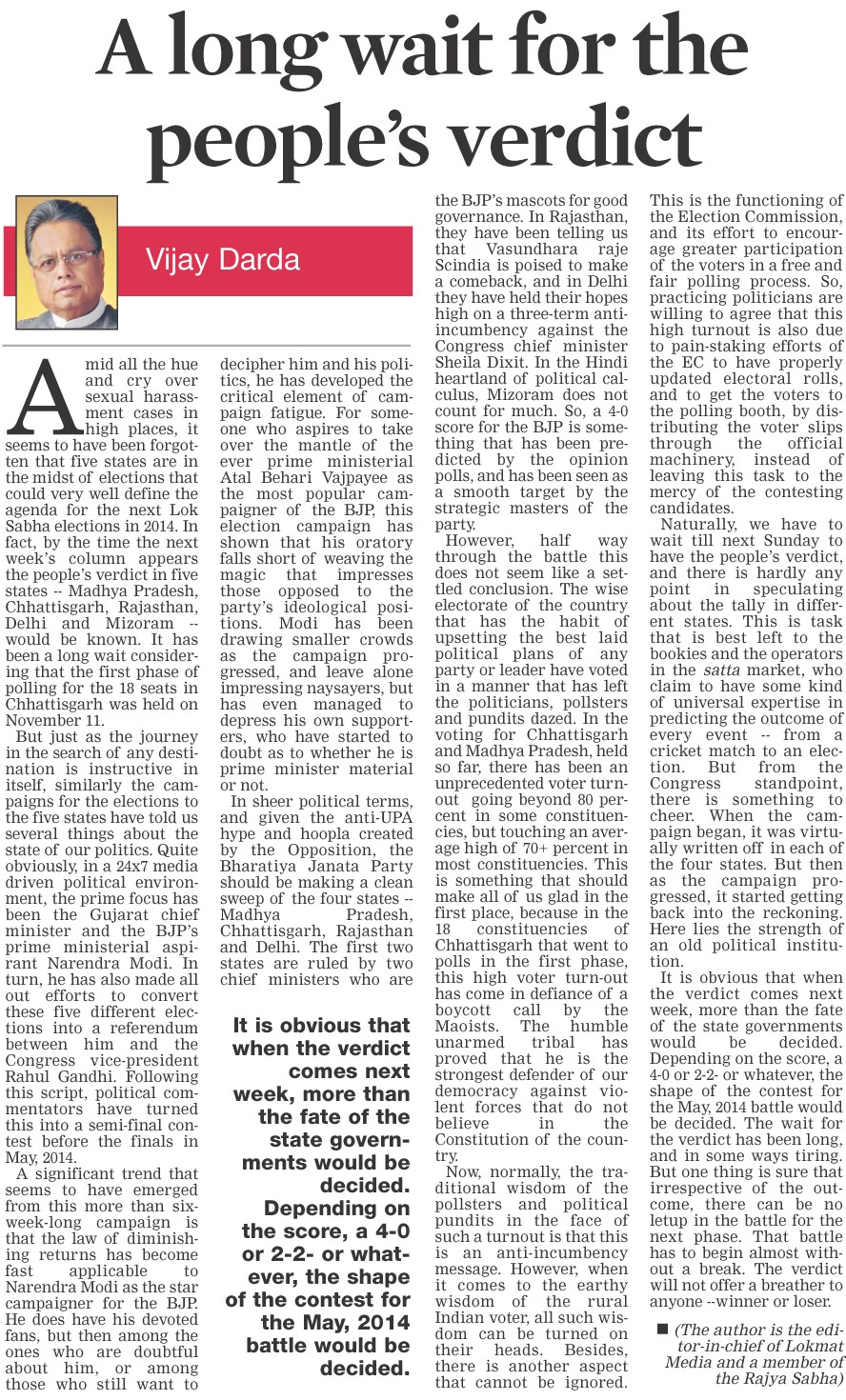 Rahul has emerged as a mature politician