It is said there are only seven immortal individuals. An immortal is nothing but a person near whom even the shadow of old age and death does not lurk. If you ask any Hindi cine lover, particularly one who has been tracking Indian cinema from the fourth-fifth decade of the last century, s/he will tell you without batting an eyelid that there is one more immortal. His name is Dev Anand.

The troika of Dev, Raj and Dilip ruled Hindi cine world for long. Later, only Rajesh Khanna and Amitabh Bachchan, and recently the Khan trio, could hold such sway over the psyche of film buffs. Still, nobody could match the achievements of Dev-Raj-Dilip. Among these three also, Raj Kapoor began playing roles of father or character actor after he began feeling the age. Dilip Kumar also followed suit. However, evergreen Dev Anand continued romancing Suraiya to Tina Munim via a countless beauties earning epithets like evergreen, eternal, chocolate hero and diehard romantic.

In the days when filmdom was not perceived as a respectable profession – in fact it was being said that those who could not do anything in life should try their hand in cinema – it was considered a big deal when the young Dharam Dev Anand Pishori, armed with a degree in English literature, came directly to Mumbai from Pakistan dreaming a career in cinema. Father Pishorilal was a celebrated lawyer of that time but all his children (Chetan, Dev and Vijay) chose films over legal profession.

During his short stay in Pune, Dev forged a bond of friendship with Guru Dutt and both swore to help each other in the film world. However, it was Ashok Kumar who gave the first real break to Dev Anand. He played a lead, though a relatively inferior role, against Suraiya, the then leading actress. Both did seven films together. They fell in love and even wanted to tie the nuptial knot but could not. She was a Muslim and he was a Hindu. Suraiya’s ‘mausi’ came in the way of the match. Dev kept doing films with many other leading ladies for long but he really enchanted the film connoisseurs in 1960s. Romance, though on silver screen, earned respect and popularity in that period and credit for this undoubtedly goes to Dev Anand.

Tere Ghar Ke Saamne, Asali Nakali, Jab Pyar Kisise Hota Hai…the list of his films is endless. That rapid dialogue delivery as if he was not taking a breath, approaching heroine — while crooning a number — in his trademark walk, jerking neck… his mannerisms were many. His every single action was like a style statement. His hairstyle had cast such a spell on the youth that one could see Dev Anands in every nook and corner of the country. The true showman Raj Kapoor who made social statement through movies that entertained you and also had a dose of sex and then the exploits of tragedy king Dilip Kumar… Cine lovers used to keep waiting for new films of these starts for months together. Still, Dev Anands’ were the most awaited films. New film would invariably be released in Mumbai first. The plans for the whole week opened at the theatre concerned from Monday, much before the movie was actually screened on Friday. Possessed by the thought of ‘First Day, First show’, the diehard fans made a beeline at the ticket counters from early Monday morning or a night earlier. It was sheer madness. The media has grown so much and films are hyped to such an extent before they even go on floor that eagerness and enthusiasm that one could feel for films in those days is not seen today.

I was fortunate to be blessed with friendship with Dev Anand, the true claimant of the epithet ‘evergreen’, which many a time is used loosely for many. While bidding him the final farewell, what I remember is his pure, eager gaze, and the warm feel of his hands.

In 2006, Lokmat had felicitated him at Nagpur. His look, filled with a grateful joy, was as eloquent as his speech. I had attended the premiere of the colour version of film Hum Dono. The entire Bollywood had turned up at the venue but Dev Saab sat in his car, waiting for me to arrive. What selfless love this man was capable of!

During his recent birthday programme, Dev Saab said to me, “After returning from London, we will go to Yavatmal.” We had even planned a felicitation programme for him there. But he never returned from London. For a long while, he kept denying the fact that his days as a hero were over. Apart from acting, he continued the gamble of producing films till his last breath. What was the logic behind it? He himself told this to me once: Main zindgi ka saath nibhata chala gaya. 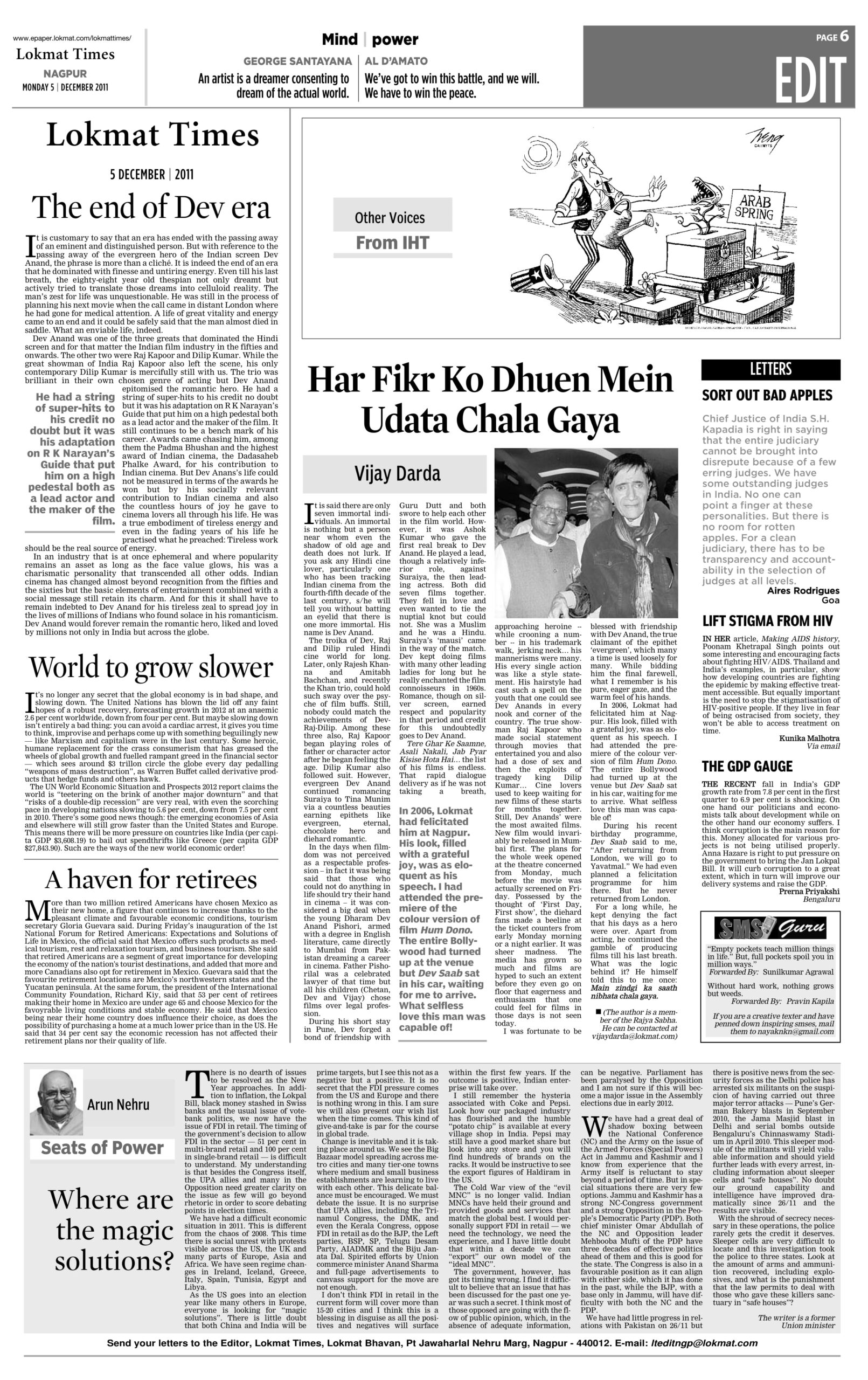