There was a time when a Congress president Dev Kant Baruah became infamous for a slogan — “India is Indira”. Those were the days of post-1975 Emergency. It is something that the BJP never forgets to remind us. But then the last week has conclusively proved that Modi is BJP. It has also established that howsoever Modi may hate the Gandhis in public, yet he openly aspires to have their kind of power and clout in the BJP. He wants that his decisions or wish should not be questioned. Also, he makes it clear that the virtues of supposed internal democracy that are touted by the BJP as a differentiating factor from an ‘authoritarian Congress’ be damned.

Make no mistake, he wants to prove that he is the boss, and all others are mere nobodies. Right now only Advani, Swaraj, Joshi and Jaswant have learned this lesson the hard way, and if Modi, and not BJP comes to power then Rajnath, Jaitley and others who appear to be in his good books at the present are sure to learn it in a much more bitter way. Please note that the hoardings and the advertisement campaign are exhorting the people to vote a “Modi Sarkar” and not a BJP government.

There is hardly anything surprising about this being established in the public domain. This is Modi’s Gujarat model of politics. It is only political strategy that makes him keep quiet about in his public speeches. Or else never given to any understatement about his achievements, in his well perfected style “Mitron, hamne Gujarat mein……” he could have gone on and on to list the seniors that have been decimated by him. But then actions speak louder than words. This is one domain of achievements on which he prefers the moaning and groaning words of the decimated ones to speak for his deeds.

However, so far Modi has achieved only limited success in his quest to be BJP. He has bagged a few trophies, but the final prize shall come only and only if the party forms a government on its own. He has been claiming a Modi wave, and his acolytes talk of a tsunami. Now, in a wave even a lamppost wins an election riding on that ticket. Can he get 272 nobodies past the winning post? Only if the answer is yes in mid-May 2014, that Modi will be able to say –‘I am BJP’.

However, Modi began his quest right from the time the RSS decided to bank upon him and got him anointed as the chairman of the campaign committee. He has systematically followed this path of humiliating the seniors. Let us face it, this is the only way he knows to establish his power. This is also the DNA of the RSS. The sarsangchalak is all powerful. His age, seniority do not matter. He has the last word. That is why after every stroke that humiliates the seniors, Modi rushes to Bhagwat to seek his blessings. The sarsanghchalak simply signs on the dotted line. After all, it is his script that is being enacted by Modi. For long years Bhagwat wanted that Advani should go into oblivion. He feels that Advani should be content with the honorary status of a father figure.

Why even his predecessor Sudarshan had ordained in 2004 that the seniors (Atal, Advani) should retire. The rest of the world may sympathise with the seniors in the BJP or shed tears over their ill-treatment, but then the BJP rank and file and the RSS simply want them out of sight. Perhaps, the only thing that could have been differently done is that they could have been gracefully eased out into sunset. But then graces are once again not a part of the Modi or the RSS DNA. In this case, sadly this applies to both the sides –so-called oppressors as well as the so-called victims, barring Advani.

The RSS adheres to a well-crafted ‘use and throw’ policy. There is a long list of politicians who have suffered because of this approach. Within the BJP-RSS, there is still an influential club of politicians who believe that, if come mid-May 2014 and the party does not have the numbers to form a government on its own, then there are a whole lot of names that could be in the reckoning. Advani believes that he could be topping the list, and at least for the present the RSS helps him keep alive this illusion. This is the ‘use’ part of the policy. The ‘throw’ shall come if the BJP has a majority on its own. Then Advani knows that he cannot be a Cabinet minister in a Modi government.

Ordinarily, all this should scare the voter away from Modi, and the BJP. After all, a country as diverse as India needs a combine at the helm of affairs that successfully blends all the elements. It always needs the healing touch and not the divisive sword. But there is a different mindset in operation that is quite scary. The high decibel pro-Modi campaign, well-orchestrated in the media, and met by some inexplicably poor communication strategy from the Congress has created an aura that in their hatred for Congress, many people are willing to overlook the entire track record of Modi’s misdeeds, even his role in the 2002 Gujarat riots.

Besides, there is a vocal section led by the corporate honchos who believe that some Chinese kind of a dictatorship is a panacea for the imagined economic ills of the country. As a parliamentarian and a media person, I can assert from personal experience, that nothing can be farther from truth. In a federal country like ours, consensus building, and not riding rough shod over others is the only way. I am also equally sure that in retrospect the stability of the last 10 years maintained against all odds by the UPA under the leadership of the Congress president Sonia Gandhi, under the most challenging circumstances, would be ranked as a sterling achievement. Mind you, unlike Modi, she does not a have RSS sarsanghchalak to run for succour and enforce her wish. For her, the only route is to wait patiently and persuade everyone without stepping on too many toes or breaking brittle egos. She has been firm and resolute but patient. All this is alien to Modi. 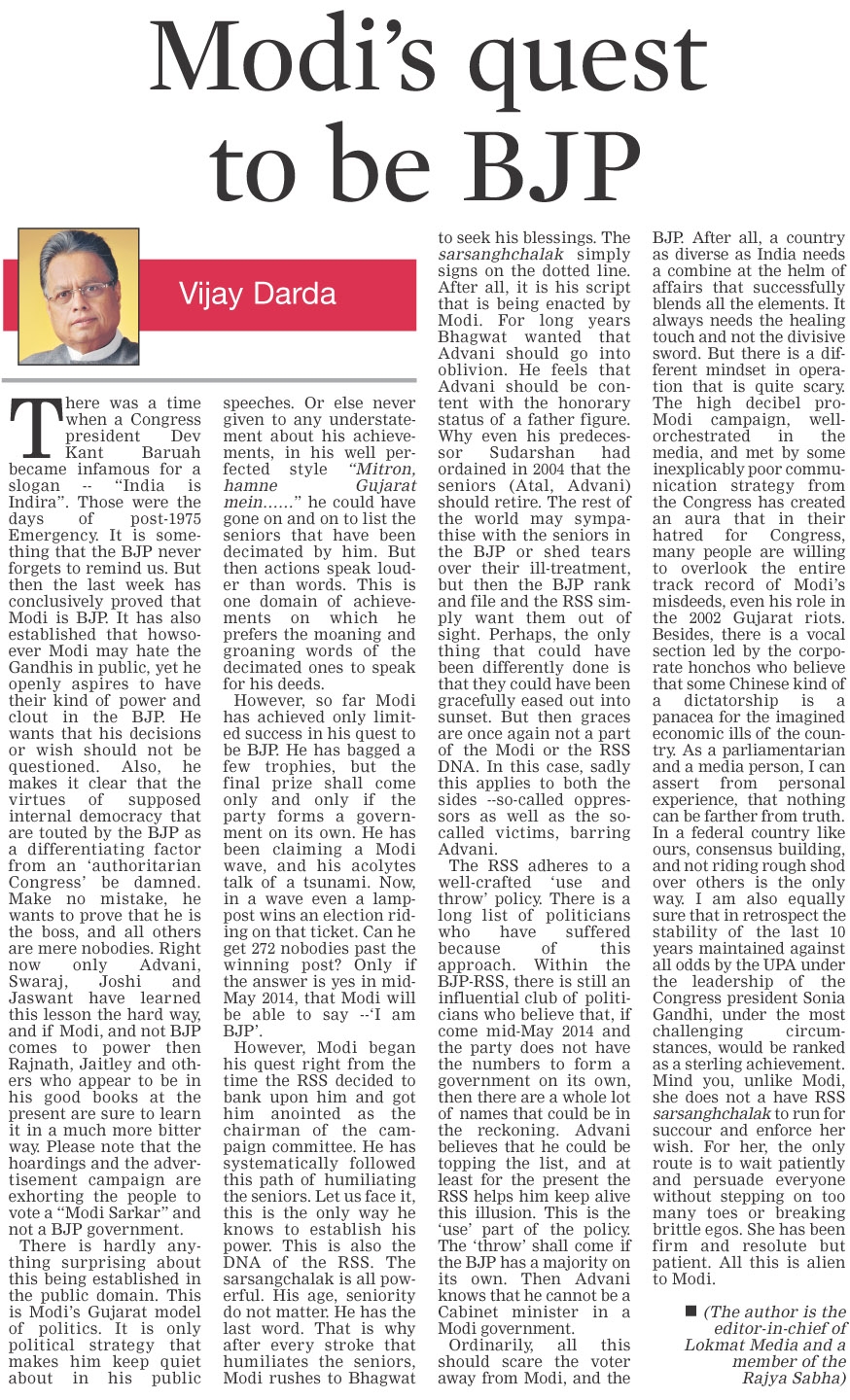