In the few months that elapsed between the 68th Independence Day and his royal coronation-like swearing-in as Prime Minister, the most significant worry for his supporters was that Narendra Modi the person who had a speech or a tweet ready for every occasion had somehow gone tongue-tied. Come August 15, and Modi not only found his voice, but delivered an oration that has his diehard fans gushing. As for his critics, for the present they simply count for nothing, and going by the absolute majority that he enjoys in the Lok Sabha, they would have to wait for at least five years before they matter in the new scheme of things.

The strongest message delivered by the Prime Minister is that the Nehru era has come to an end. No reference to the first Prime Minister of the country in the longest ever speech from the ramparts of the Red Fort, and dismantling of the Planning Commission set-up by the first Prime Minister were the two important signals emanating from his oration. To be fair, restructuring of the Planning Commission had been suggested by the previous government itself, and one can be certain that even Panditji the most modern man in terms of vision who marched ahead of his times, would have ordered the necessary changes. But that is beside the point for the moment as we await the details and designs for the new institute that is expected to replace the Planning Commission.

First, as the prime ministerial candidate and now as the Prime Minister, Modi has proved himself to be a remarkable man of words. If there is any person who has talked his way to power, then the award goes to Modi. He marketed his Gujarat model with impressive credentials throughout the country, and the people believed in him. It is just 85 days precisely that he has been in power, and so there have been no reasons to disbelieve him. The people trust him when he delivers strong emotive messages on sensitive issues like rapes, female foeticide, cleanliness, and the desire to make India a manufacturing hub with catchy graded slogans like “No defect, no effect”. All through the year-long campaign, he persuaded the people to believe that once he comes to power things would be all rosy almost with the wave of his hand. He did create an image that he does have such capacities.

Now, as Prime Minister he has etched a vision of a country that has such capacities.“Imagine, brothers and sisters what would happen when 125 crore people take a step forward,” he said in his perfect oratorical pitch. No wonder, there are crores of people who have got goose bumps. They have never heard a Prime Minister speak in such a language from the Red Fort.

Impressing the people and delivering an oration that has all the commentators gushing is just one objective of the Red Fort annual address. There is another main task that the successive prime ministers have achieved through this exercise. It has always been a state of the nation kind of address, that tells us about the government’s and most importantly the Prime Minister’s analysis of the present problems facing the country and his way forward to addressing these. There is the broad picture of the problems and the roadmap to solving these. Surely this is not something that cannot be left to the ‘brothers and sisters’ of the country to fight in their own 125 crore ways and at the domestic level of their sons and daughters. Take for instance, tackling the challenge of import substitution, can an individual entrepreneur really take the challenge of the Chinese cheap goods? It may happen in the case of some stray product, but at the global level where the competition is aided by a clutch of hostile conditions does this approach work?

But then in his quest to be different and not like the previous prime ministers he deliberately skipped such typical bread and butter issues. So, the net result is that even after he has delivered the longest oration the nation is not a bit wiser about his stand on crucial issues. For instance, on the issue of communal violence, he called for a moratorium of 10 years. So, by implication we can take it that he hopes to remain in power for a decade, and there should be no communal violence during his tenure at the helm of affairs. After that perhaps can it be business as usual? He remains cleverly mum on such issues and the resultant confusion remarkably suits his supporters.

His entire persona and communication drive is always aided by a clever marketing machinery. So, there was a buzz around his going extempore even before the speech was delivered. Not realising that this was the norm for Pandit Jawaharlal Nehru, the man whose legacy he is in such a haste to dismantle. Besides, the point about a speech is not whether it is delivered extempore or whether it is delivered from a text. It is the content that matters.

In that context, we discover that there was really nothing new in his speech. He made a big deal of ‘model villages”, little realising that there is a Pradhan Mantri Adarsh Gram Yojana (PMAGY) already in place and functioning from 2009-10 with a 12th Plan target of 44,000 villages. In so far as the other theme, toilets for girl students are concerned, under the Sarva Shiksha Abhiyan all school buildings are supposed to be composite in such structure with separate toilets for boys and girls and more than 4 lakh such toilets have been provided for. Besides, there is a separate drinking water and sanitation mission in place virtually for all the state governments. This does not mean that the problem has been solved, but it is only to point out that this is not a new idea that has dawned only after May 26.

In short, if words were all, then the Prime Minister has surely conquered from the Red Fort, but then we as citizens know better. 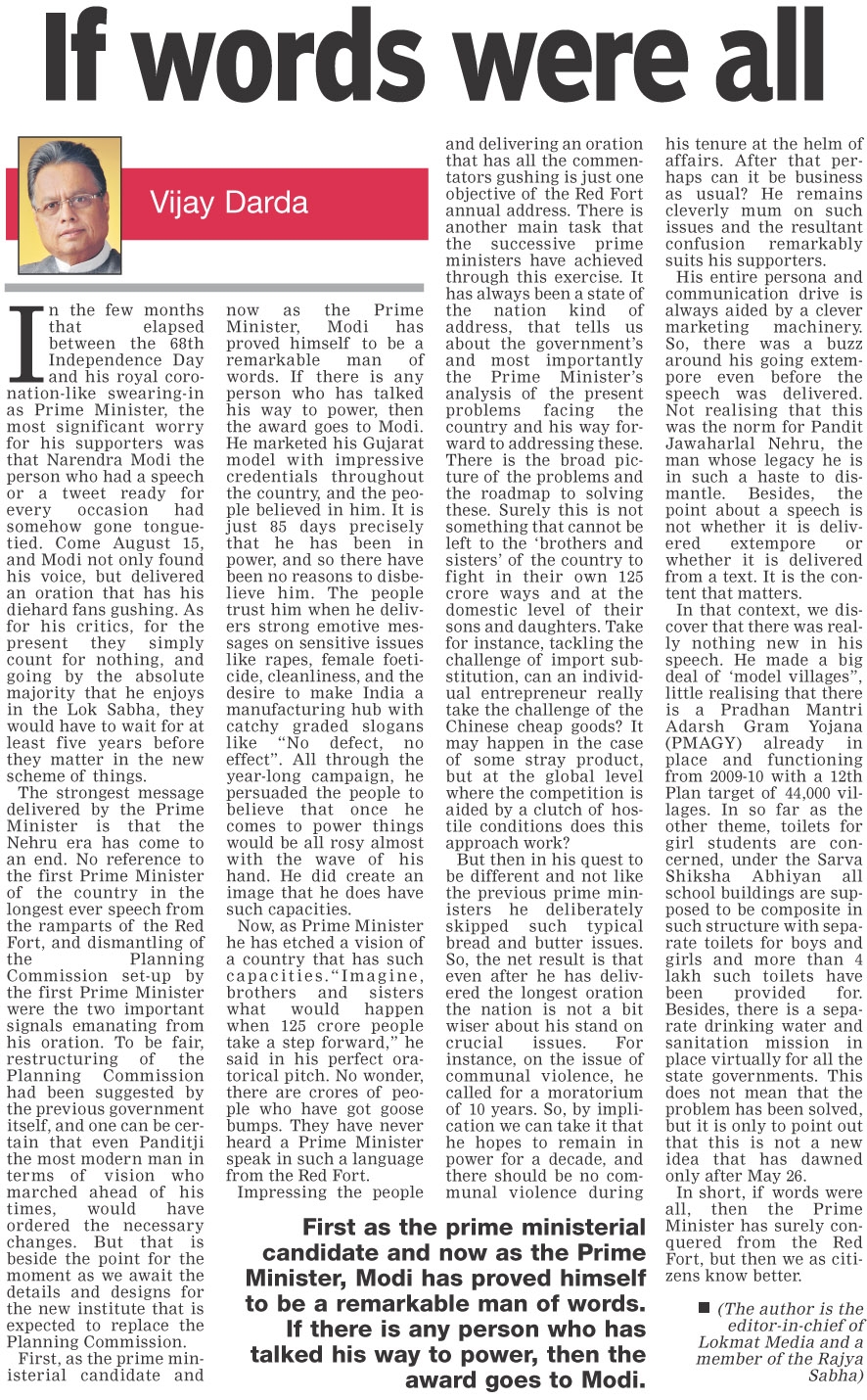