One can sense an air of a frustrated annoyance in the election speeches of BJP’s prime ministerial candidate Narendra Modi. He has always been aggressive and contemptuous of the Gandhi family. He deploys a mocking tone, and is loved by his loyalists for it. But now he has been moved to refer to the Congress vice- president Rahul Gandhi as the shehzada. This expression appears mocking but there is a grudging acceptance that the Congress vice-president is placed on some higher plane.

Now, when it comes to Modi there is no point in arguing with him that his use of this expression is undemocratic and our well perfected system has no room for such distortions. We are a democracy and everyone is an equal citizen. There are no shahs or shehzadas. A person comes to power only if he gets the people’s endorsement. Modi also understands this, so why does he use such derogatory expressions. The only palpable cause is that he has been politically hurt by Rahul Gandhi’s speeches in the last few days.

For the first time Rahul Gandhi has established a direct link between communalism and terrorism. The television anchors who have assumed the self- appointed role of interpreters of political speeches by using glib jargon and catchy headlines as well as the people who package news have been foxed. They are simply baffled at this paradigm shift and are asking the question — how can he do it? Have his speech writers gone berserk? Does he even understand what he is talking? Can he not differentiate between a communal riot and a terror attack? There are others who have pontificated that with this approach he cannot tackle Modi. He needs a better script, that has something that appeals to the voters, they argue.

But the Rahul link between communal hatred and terror is half the story. The connecting link that is making eminent political sense and is appreciated by everyone even in villages is Rahul’s emphasis on BJP’s politics of hate in the same breath. It is this trio — communalism, terrorism and BJP’s politics of hate — as well as their cyclical link that annoys Modi and his supporters, no end. They do not like it when the public discourse shifts from their turf to anything else. Within their minds, they have formulated a script for this discourse, which presumes that the Congress is responsible for all the ills of the country, and they have all the solutions. In the sound and fury of the electoral campaigns, they wish to hard sell this proposition with an anticipation that this broad picture thesis would be bought by the people who may be looking for an alternative, and thus would not bother about the detail. It is their fond hope that on this plank they shall be able to convince enough voters, they offer the right choice for 2014.

Now, Rahul Gandhi has derailed this script. He has posited that the real danger to the India growth story comes from this divisive politics of hate that is practiced by the BJP. He has narrated to the people that whether it is communalism or terrorism the root cause is this hatred. He has stressed that it is this hate that killed his grandmother, and it also killed the riot victims in Muzaffarnagar. The BJP and Modi have not questioned this connection but they have objected to the meeting between an IB man and Rahul Gandhi. For them, the more important issue is the capacity in which Rahul Gandhi met the IB man, and not the substance of this disclosure that the Muslim youths are being lured by the Pakistani intelligence agency ISI.

Now, if he had been making a point that had not been cutting any ice with the people, the BJP and Modi supporters would have ignored these arguments coming from Rahul Gandhi. But then the people’s experience with the Sangh Parivar and Narendra Modi is very strong, and they cannot be simply oblivious to the points that Rahul Gandhi is making. Indeed, even the RSS finds that it cannot ignore Rahul Gandhi’s arguments and endorse the criticism that has come from Modi on this issue.

As Modi woos the voters, the Muslim clerics have also demanded that he should apologise for the 2002 riots, and then perhaps they would not have issues with supporting him for the 2014 elections. However, Modi is not going to yield his advantage with the Hindu community by apologising for the 2002 riots. His persistent refusal to do so in the face of a climate that he can gain some support among the minority community, even if he does as much as saying a sorry, it is not going to change the political situation substantially, but only indicate that he accepts his infallibility. Indeed, he has been steadfastly opposed to the sorry word in this context for so long, and that even if he accepts this route, it will be seen as a sigh of his weakness.

But in this case, the issue is not Modi or Sangh Parivar. The paradigm shift brought forth by Rahul Gandhi in this discourse concerns us all. In 1947, the country was partitioned on the grounds of religious hatred, and still our tall leaders accepted a secular country. No one would have blamed them if Mahatma Gandhi, Jawaharlal Nehru and Sardar Patel had decided to make India a Hindu country. But they knew the human character very well, and opted for a secular India. Now, the Pakistan created on the basis of religious hatred and for the Muslims is a failed state. The most emphatic point that Rahul Gandhi is making after 66 years is that the same politics of hate now being played by the BJP is aimed at creating a Hindu India, and this like the Muslim Pakistan would be a failed state. He effectively punctures the Sangh Parivar’s dreams of an Akhand Hindu Rashtra, and this hurts the Sangh Parivar and Modi the most. 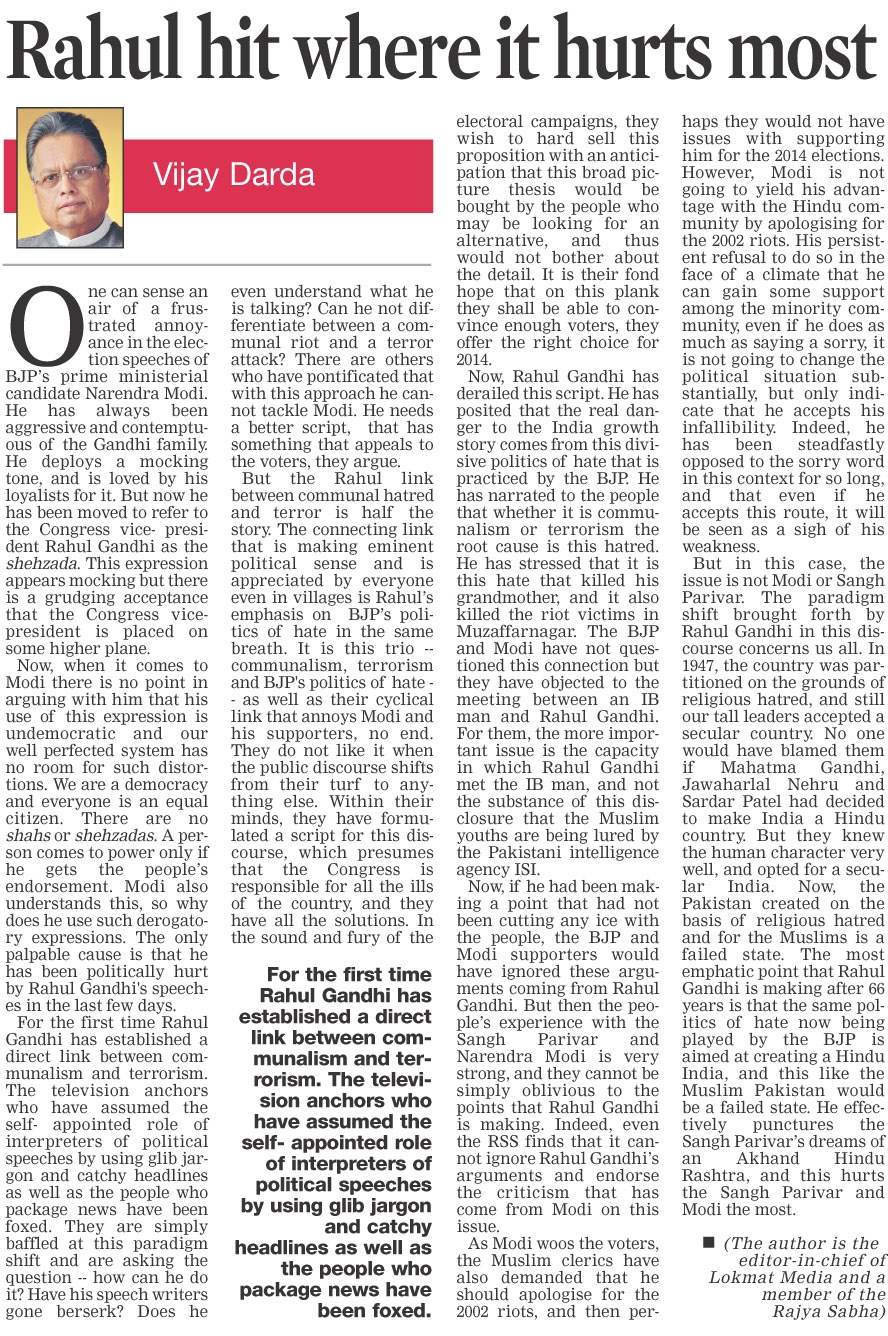