Hic, hic, hurray! The boozards are drinking to save the economy from sinking!

Wherever you go, people today ask, what was the hurry to reopen the liquor shops? Brother, this query is fundamentally wrong. Just because you don’t drink, does it mean the government should not care about our boozards? Why not, brother? They are also citizens of the nation. They also have rights! Who told you they drink for themselves? They drink to help build the nation. Do you know that at least 10 to 15% of the state governments’ revenue is dragged out of the throats of boozards?

Of course, the figures are a bit less in Maharashtra. Less, not because they are listening to Pankaj Udhas’ advice, ‘Hui mehngi bahut hi sharaab ke thodi thodi piya karo’. Indeed, they drink heartily but the government is generous. The tax is somewhat less. That means boozards have left nothing to chance to cooperate in adding to the coffers. The government is to blame for any shortcoming. How much difference did it make if in the name of Gandhiji, in Gujarat, in Wardha, in Chandrapur and other places, they made guzzling a crime? But the guzzlers continued to cooperate in adding to the coffers. Now it is quite a different matter that the profits went straight into the pockets of the illicit liquor barons and those who protect them. Obviously, it is not a nice thing to doubt the intentions of the tipplers. And however much Anna Hazare or Dr Abhay Bang might agitate, it makes no difference. The gang of boozards remains undeterred. Did this gang weaken during the lockdown? Of course, not! They bought a bottle worth Rs 500 for 10 times the price at Rs 5,000!

When the liquor shops opened after 41 days of lockdown, these bravehearts immediately descended on these shops. The US, having seen it through satellite, misunderstood that India has secretly developed some vaccine or herbal medicine. The US had an emergent meeting followed by an investigation which revealed that it were the boozards at liquor shops.

The boozards did not even mind when the government got greedy. It raised the prices by 70% the next day but these bravehearts were not to be deterred. They once again dug in their heels before the liquor shops. Even if people said opening the liquor shops had defeated the purpose of lockdown, it just did not matter! The sole goal of the boozards, after all, is to help government fill up the coffers which had emptied as a result of the lockdown. Even the government has complete faith in the thirsty and parched drinkers. You can understand how high this faith in drunkards is by the simple fact that 16 big states had stated in their 2020-21 budget estimates that they expected to collect Rs 1.65 lakh crore in excise through sales of liquor.

And the best part of the deal is that the boozard never disappoints. In 2019, he contributed Rs 2.48 lakh crore to the economy; in 2018, it was Rs 2.17 lakh crore and in 2017, it was Rs 1.99 lakh crore. In the early days of lockdown, the states lost an estimated Rs 27,000 crore on account of no sale of liquor. That would be a loss of around Rs 679 crore every day. The lockdown is solely responsible for this loss. Those desirous of drinking were ready to sprint to the liquor shops during the lockdown, but it was the government that was giving them no opportunity. Just look at how they hopped, skipped and jumped towards the liquor shops the moment they got that opportunity! Oh yes, I simply forgot that they are now even talking of home delivery of liquor. Now who will ask the government if they believe that while the distribution of newspapers spread the virus, is the delivery of liquor like the spread of nectar?

Nevertheless, boozards have many other redeeming qualities that are by and large ignored. Now just look at this! When the prices of petroleum products rise, the entire nation creates a hue and cry. But the community of drunkards never protests when prices of alcohol go up. Have you ever seen our drunkards take out a morcha in protest against liquor price rise? Perhaps not, because our nation’s boozards are very tolerant. The nation should be proud that our drunkards have such a big heart. They are absolutely fearless. They never bother about the fact that drinking could affect the lungs or even kidneys. The WHO may have decreed that drinking more than 7.5 units or 187.5 ml of alcohol in a day is overdrinking. But this amount of alcohol hardly makes any difference to most of our boozards. No delicate sipping for them, they gulp down their drinks lest others point fingers at them and say this alcohol lover has a weak heart! Lovers, after all, can breach all the barriers!

They are not frightened by the statistics that say that 1.4 lakh people die every year of cirrhosis of the liver or that ‘drunken driving’ causes one lakh deaths where boozards either kill someone or get killed by someone. How does one expect such liquor lovers to be frightened away merely by coronavirus! You might have seen that they were not even afraid of catching the virus through jostling at the liquor shops. They looked so romantic standing so close to each other! Oh brother! While writing his famous ‘Madhushala’, even Harivansh Rai Bachchan might not have thought that boozards will ‘understand’ his line literally: …mel karati madhushala!

The problem now is that many lovers of Angoor ki beti (alcohol) are not getting the chance to express their love for her. The red zone has become a hurdle. One such lovelorn romantic has parodied a few lines that are viral on social media:

It is likely that you might be annoyed by the government for opening liquor shops during pandemic. But there is always another world view. Now just imagine, those drunkards who are looked down upon by society, those very boozards have come forward as saviours of our sinking economy. If they hadn’t come forward our state governments would have gone bankrupt. Three cheers for our boozards! 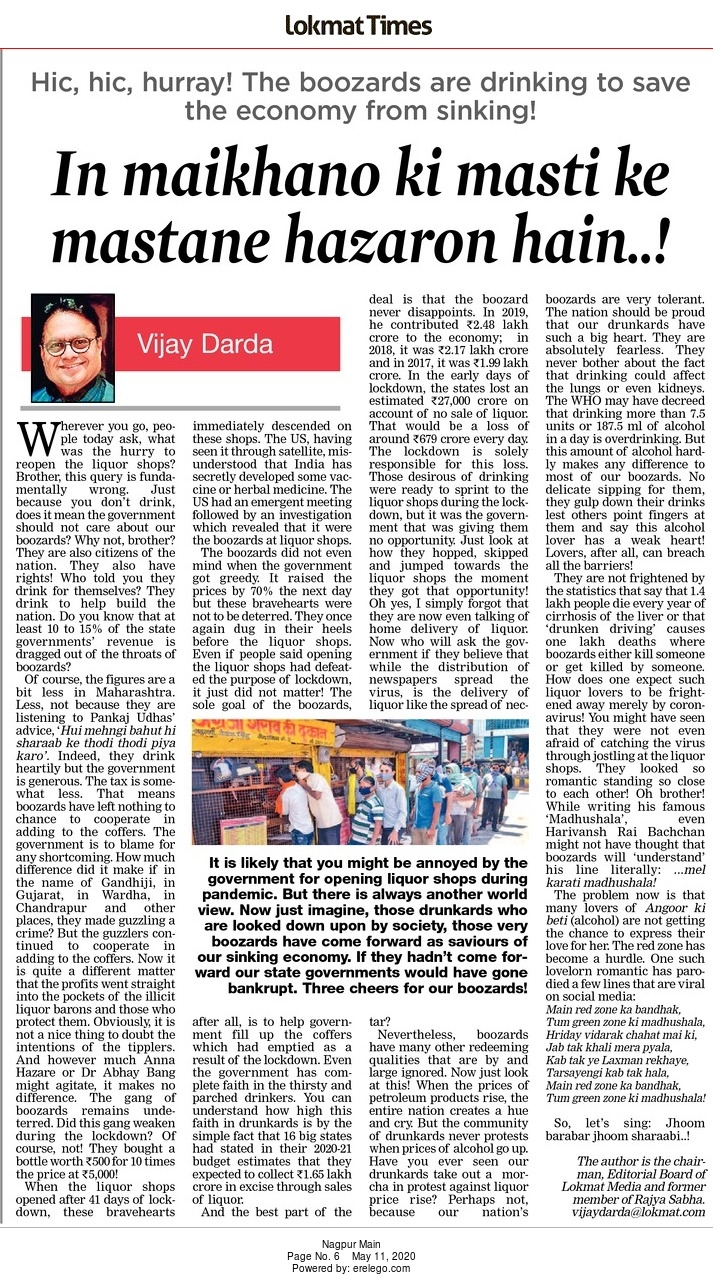