People are afraid of spitting or stealing abroad, but here even the noose does not deter them. Why…!!!

What happened in Hathras is a stigma on the society, the state of Uttar Pradesh, the country and the entire humanity. Unfortunately, attempts are being made to see such brutal crimes from the narrow perspective of caste and religion. If a Dalit girl has been raped, will those running the government support the upper caste people? Will the police take action keeping in view the party the perpetrators belonged to? Why were the culprits not arrested as soon as the rape incident was reported? What was the government waiting for?

As many as 11 incidents of rape and molestation were reported in Rajasthan within a week, but the government did not delay the action there! There, the police did not cremate any body in the dead of night without the consent of the parents! So why did all this happen in Uttar Pradesh? Who gave the district magistrate powers to kick the protestors? If someone belongs to the weaker section, will you suppress and silence them? How dare you misbehave and manhandle Rahul Gandhi, Priyanka Gandhi and Derek O’Brien? Is this all possible without the permission of the person heading the government? Not at all!

Had the Prime Minister Narendra Modi not intervened and asked the UP chief minister Yogi Adityanath what all was going on in his state, there would have been no action! It was only after PM’s intervention that the Uttar Pradesh government formed the SIT and has now recommended a CBI inquiry. However, ordering a judicial inquiry would have earned the trust of the victim’s family. Some compensation has also been announced for the girl’s family, but the question is, can there be any compensation for as heinous a crime as rape?

I remember the incident when Lal Bahadur Shastri had resigned as the railway minister owning moral responsibility after a railway accident. After such a horrible incident in Uttar Pradesh, Yogi Adityanath should have resigned himself on moral grounds or the party should have taken his resignation. But the expectation of any morality from Yogi Adityanath came to naught on the same day when the media asked him if you would go to the foundation stone laying ceremony of Babri Masjid and he replied that the question does not arise! I will not go! The question is, how can he even dare speak like this? This is a clear violation of the Constitution. Our country runs as per the Constitution given by Dr Babasaheb Ambedkar; the same Constitution which gave Yogi the post of chief minister.

After this incident, I cannot even dare say that there is a democratic government in Uttar Pradesh. Girls are falling victim to such cruelty in the state where the foundation stone of the proposed Ram temple was laid recently and which people likened to the advent of Ram Rajya. Last year, 3,000 cases of rape were reported in UP, which is 10 per cent of the entire country. Of these reported cases, 270 involved minors.

Not that rapes are being committed only in UP only. No! They are being committed in Rajasthan, Maharashtra and Madhya Pradesh as well. Some 90 incidents of rape are reported every day in the country. The question is how do we look at these incidents? It is not right to view such crime through the prism of religion, caste or politics. It should be seen only through the eyes of the law and those who support these predators should be crushed.

In this same Uttar Pradesh, BJP MLA Kuldeep Singh Sengar raped a 17-year-old Dalit girl, but his arrest came a year later. Why? The only reason was the mentality to save such savage criminals. Prior to joining BJP, Sengar had been associated with the BSP, SP and Congress. Every party supports criminals, which keeps their spirits high. On one hand we are making our presence felt in the world and on the other, such incidents are making us hang our head in shame. The world is laughing at us.

When a doctor girl was raped in Hyderabad, it was projected that the four accused were Muslims. The truth came out later that only one of the criminals was a Muslim and the remaining three were Hindus. An eight-year-old girl belonging to the Bakarwal community was raped in Kathua, Jammu. Seven people including the priest Sanjhiram were accused. The then minister for forests Lalsingh and industries minister Chandraprakash formed Hindu Ekta Manch and took out a morcha in support of the criminals. Later, the Supreme Court formed an SIT and the case was tried out of state. It was then that six of the seven accused were punished. There are many more such examples. The question is, who should we expect firm action from? People voted Congress out of power and brought the BJP in with a lot of expectation. But if the same party starts indulging in such activities, what people should do?

I remember that after the Nirbhaya incident, the Parliament sat through the night to pass a stringent law to punish the rapists. There is also a provision of capital punishment in it. The question is, when people are afraid of spitting in Singapore and stealing in UAE, why are we not afraid of the noose here? I agree that no chief minister, home minister or police personnel can be deployed everywhere but the fear of the law and the system should be there! Establish a fast track court and hang the rapists publicly so that fear is instilled among others, that if they commit a rape, they will be hanged like this! And yes, the police all over the country must think of increasing the conviction rate in rape cases which at present stands only around 27 per cent. After all, how long will our daughters and sisters be tormented?

The only feeling I have in my mind right now is better described in this Sahir Ludhianvi’s song:

The heart is filled with rage and the eyes are moist. The parents of the gangrape and murder victim could not see her body for one last time. The police cremated the body in the dead of night. The height of inhumanity was such that a policeman was caught on the camera laughing shamelessly while the victim girl’s body was burning! … and the entire country was in tears! 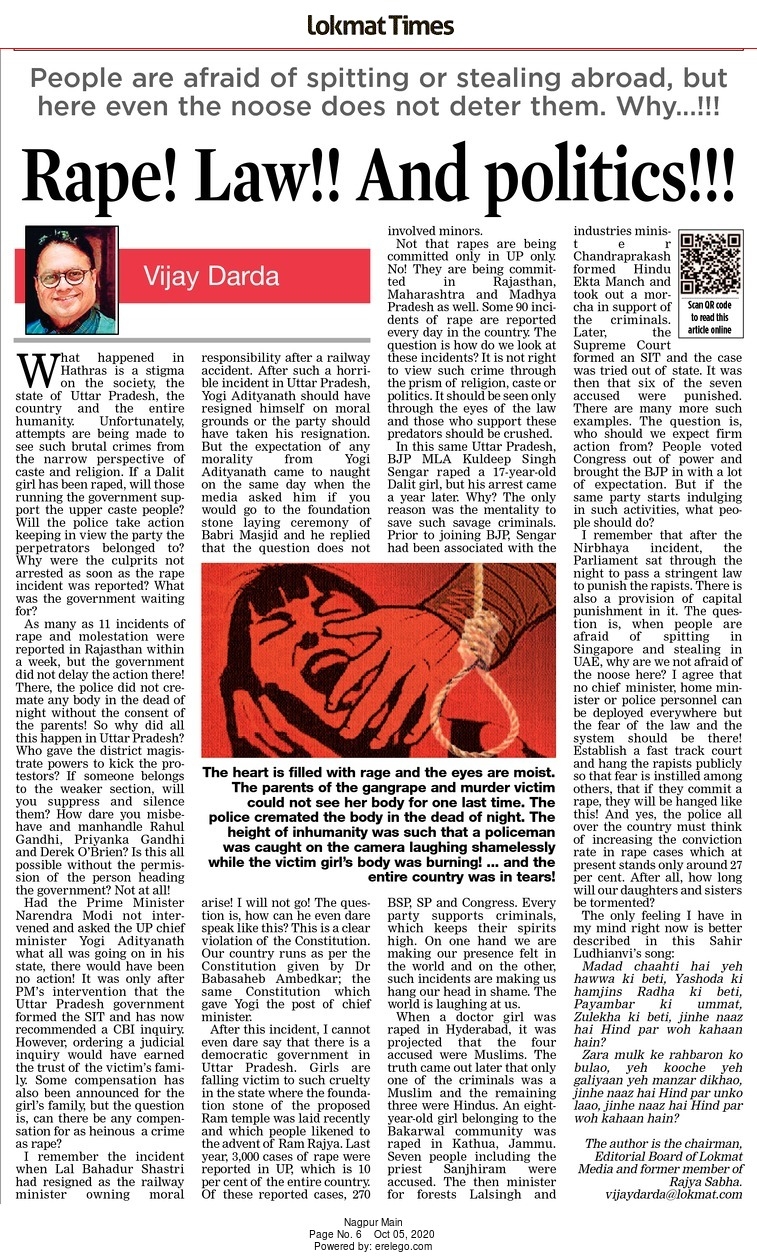