India has opportunity to become a major player

Why are China and Pakistan upset by Modi’s trip to US for Quad?

If you have watched the live telecast of the meeting of Indian Prime Minister Narendra Modi and US President Joe Biden, you must have noticed Modiji’s body language. You must have also paid attention to his simple statements. It was felt that the leaders of the world’s oldest democracy and the largest democracy are sitting face to face and talks are taking place on a level playing field. Joe Biden has begun to understand the geopolitical reality and Modiji already knows that in the midst of all the challenges, this is also a big opportunity for India. If the diplomatic move is executed immaculately, the direction of the wind can be tweaked in India’s favour.

Diplomacy is a very complicated art. What is seen does not happen and what happens is not seen. Though both the leaders were praising each other, different subjects must have been flashing in their minds. India’s biggest worry at the time is Afghanistan because Pakistan is playing its game in that land-locked country and China is planning to use it as cat’s paw.

India knows that Pakistan will use the terrain of Afghanistan against India! India wants the US to use its pressure to stop it. On the other hand, the US is more worried about China and Iran rather than Afghanistan at the time because China is challenging its supreme power and Iran is constantly defying it. That Afghanistan will keep an eye on Iran is also said to be a part of the deal between the US and Afghanistan.

However, the US, which has nurtured Pakistan for seventy years, knows that if there can be any partner in its war against China, it is India. India is a big country. There is a big market and it is a great power too.

The US has realised that Pakistan is dancing to the tune of China. It has become clear to the US that in the name of fighting against terrorism, Pakistan has supported the terrorists even after swallowing trillions of dollars. It sheltered Osama bin Laden in its safe haven. What I mean to say is that the US needs India the most at this time. India is one of the biggest markets in the world and by making this market powerful, the economic power of China can be weakened.

Many American companies are currently in China and if they are diverted to India, China’s economic imperialism can surely be stopped.

There is no such potential in any other country. India knows that it also needs the US in the war against terrorism, but diplomacy demands that both the countries avoid saying anything clearly about the future.

The question may arise in your mind whether the US needs India more or vice versa? In my view, both need each other, but the US needs us more because its unchallenged dominance is being challenged and Joe Biden’s graph is falling rapidly at the domestic level.

The US’ credibility has been dented at the world level due to the sudden departure from Afghanistan. It will take a long time to make up for the damage done to its reputation. That is why the question is being asked in India as to how much trust should be placed in the US? Should this friendship with the US be at the cost of Russia? I think Russia is our very old and trusted partner. It should not be displeased. We should not sit in anyone’s lap at all.

As far as the ‘Quadrilateral Dialogue’, i.e. ‘Quad’ comprising the US, Japan, India and Australia is concerned, I welcome the initiative to strengthen it because it will definitely help in putting a halt to China’s imperialism in our region.

We hope that this should also help us in the military technology field. If we want to compete with China, we need new technology in any case. Indian diplomacy is moving in the right direction in this matter. But the most important thing is that the more financially capable we are, the farther the battlefield will be. In the present era, only those who have wealth, knowledge and science are befriended.

Our Prime Minister Narendra Modi understands this very well. Keeping this in mind, Modiji during his visit to the US met the chief executive officers (CEOs) of five big companies to attract them to India. Among the CEOs were Shantanu Narayanan of Adobe, Vivek Lal of General Atomics, Cristiano Amon of Qualcomm, Mark Widman of First Solar and Stephen Schwarzman of Black Stone. Shantanu and Vivek are of Indian origin. Let me tell you that Adobe is a very important company in the IT and digital sector. General Atomics is a military drone manufacturer and India is a buyer of drones. Qualcomm is a major player in the software, semiconductor, wireless and first solar energy sector. If they come with us, it will be a giant leap for India!

In order to take this leap, meticulous assessment is very important. Let us not just fall in love with the US, but analyse what is important to us!

Global politics is like a game of chess. Many moves are combined with every move, but one accurate move is enough to beat the opponent. 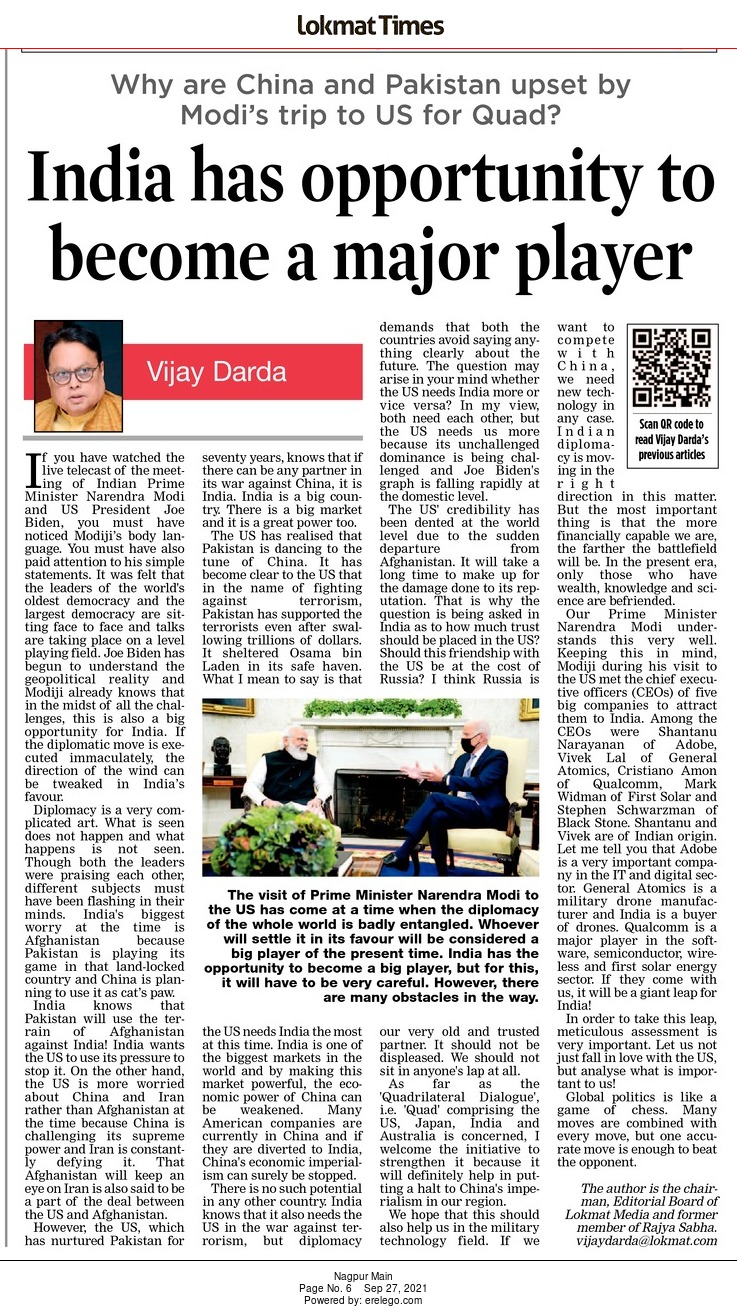 Criticism must be constructive

To compete, India needs to be economically strong