Why did the US shove Afghanistan back into the cruel clutches of the Taliban which it wanted to crush?

Let me remind you that I had written in this column in the last week of July about the brutality and atrocity against women and girls in Taliban-held areas in Afghanistan. I had put forth a question: How can the world remain silent against this oppression? I had not imagined even remotely at that time that the oppressive Taliban would be occupying Kabul’s Presidential palace within a month and the President of Afghanistan would quietly flee the country! But all this happened and the dark truth of the present time is that except for the Panjshir province, the rest of the country is under the control of the Taliban. It is beyond comprehension how many people will be the victims of this cruel regime and how many girls will be brutalised by Taliban terrorists! Afghanistan has once again been pushed into the dark dungeon!

You can call Afghanistan the land of tragedy. First it was colonised by the British, then Russia occupied it. The US not only trained the Taliban, but also gave a lot of money and plenty of weapons to ensure that Russia did not become dominant there. Villages became centres of weapons. Even today, there are markets for arms like the ones for vegetables. All sophisticated weapons are available in those markets. Once love and affection echoed in the Hindu Kush, and bliss and peace reigned in the beautiful valley. All that disappeared. Children aged 12 to 15 years started roaming around with AK-47 rifles. The tribes began to fight and rule over each other at the point of gun.

Though Russia left, Afghanistan became a sanctuary for terrorists. When Al-Qaeda founder Osama bin Laden mounted the 9/11 attack on the US, an angry America entered Afghanistan. The US killed Laden in Pakistan’s Abbottabad city, but despite a protracted war in Afghanistan, it could not eliminate the Taliban because Pakistan and China had become Taliban’s allies. They were also using terrorists against India but America was unable to do anything because it began to feel the heat at the home front.

The American people were questioning their government over its overseas policy. They asked whether the US had taken upon itself to set the world right? The people there felt that the war of Afghanistan was proving to be another Vietnam for them.

Donald Trump then decided to withdraw from Afghanistan. Peace talks with the Taliban began in Doha but the problem was that there were several factions of Taliban, so whom to talk to? Meanwhile, Joe Biden became the US President and displayed extreme hurry in withdrawing the troops from the land it had occupied for 20 years. Surprisingly, the Ghani government of Afghanistan was also not included in the talks it held with the Taliban. If America wanted, it could have laid down tough conditions before the Taliban, but it was in a hurry to run away. The Taliban anticipated this and captured the country even before America left Afghanistan. America did nothing except keep watching, giving rise to the suspicion whether there was any nexus between them? Why did the US shove Afghanistan into the jaw of Taliban from whose cruel clutches it wanted to rescue Afghanistan?

A lot of water and blood has flowed down Helmand (the longest river in Afghanistan) in the last 20 years but nothing changed the destiny of Afghanistan. The same dark clouds covered it again! Whenever there is war, the first victims are women, children and girls. You must remember the story of Malala. She was riddled with bullets because she was a proponent of education to girls. With the arrival of the Taliban, the life of girls in Afghanistan has become miserable again. You must have seen video footage where women are throwing their children towards foreign soldiers at the airport so that their lives may be saved somehow. An extremely distressing sight! All efforts by the World Bank and the Asian Bank to generate employment for youth, impart education and develop playgrounds for children during the Ghani government have come to naught. Farming in Afghanistan is nothing to speak of, so what can the youth do there?

As far as India is concerned, we have spent three billion dollars on development there. Talibanis will now sit in the Parliament that India has built! It will not be easy for India to adjust with the Taliban. My opinion is that India should tread cautiously. The question of recognising the Taliban regime does not arise. It cannot be trusted. They are fanatics who will always dance to the tune of Pakistan!

And as far as Afghanistan is concerned, will the olden days of modernity 50 years back ever return? Fifty years ago, it was a fashion hub. It used to publish slick fashion magazines and host fashion shows. The dresses of the women there were similar to the women of the European countries. The photographs taken by a person named Mohammad Qayumi tell the story of that period. Women wore pencil sandals, skirts and fashionable shirts. The campuses of universities used to be glamorous. Theatres would be crowded. Girls were ahead in every sphere of life. Between 1996 and 2001, when the Taliban seized power, the whole country lapsed into a medieval period. They have returned again, bringing with them the same dark night!

Sorry, Afghanistan! This world, which is hoisting flags on the Moon, travelling in space and searching for water on Mars, is not able to do anything for you. Rather, you have become a victim of these forces! Therefore, you will have to spread light in this dark night yourself. Be patient, have courage and awaken the energy within you so much so that the light emanating from it removes the shroud of darkness. 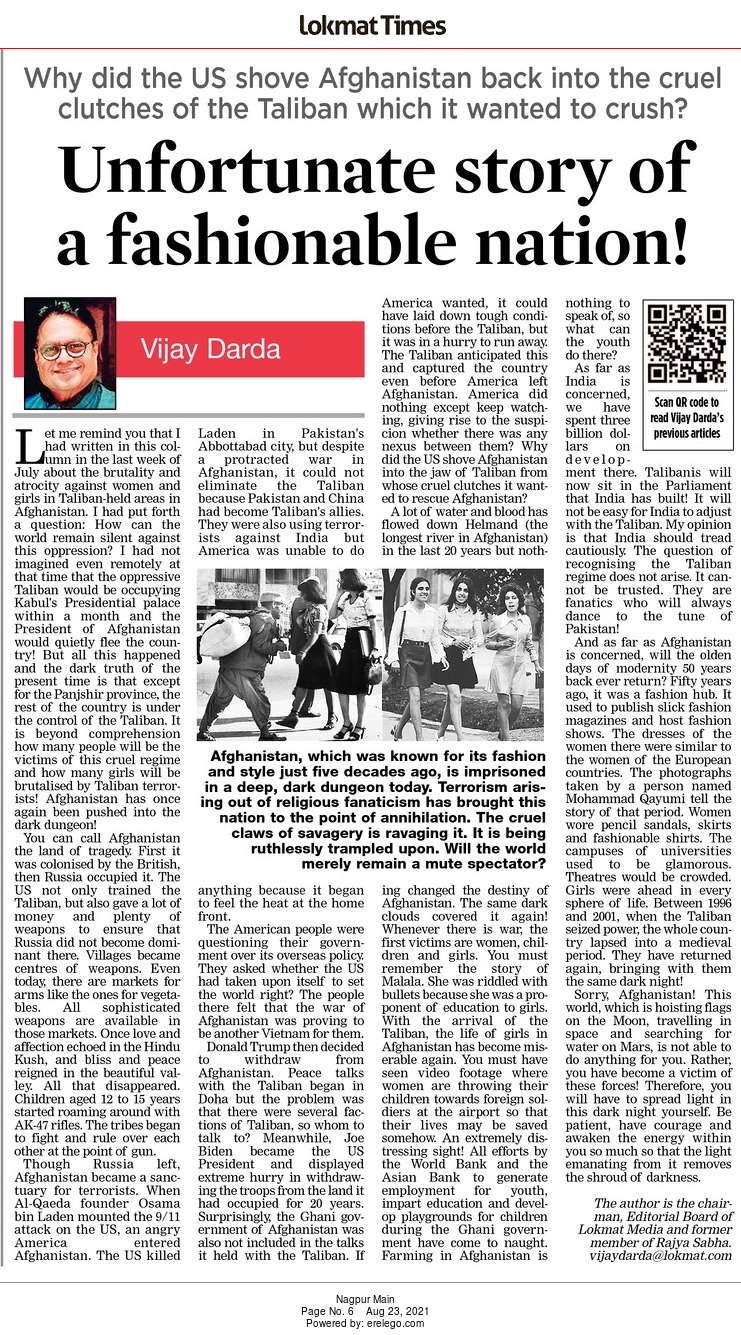