Emergence of a powerful Islamic State in Afghanistan rings an alarm bell for us, for Taliban is an enemy too.

The dreadful apprehensions about the future emerging from the Taliban takeover of Afghanistan is primarily the reason why I am discussing Afghanistan for the second consecutive week in this column. We Indians will come under its sphere of influence even if we do not want to. It will have an impact on us too. Now it is not only about Taliban but also about Islamic State or Daesh, which has killed over 150 innocent people by triggering blasts at Kabul airport and its wicked intentions for India are not hidden any more. The presence of Islamic State has been revealed several times in Kashmir and its flags have been visible there.

However, it has not been able to carry out any major action in India so far. Yes, there were reports of some people from South India joining the Islamic State earlier, but that was in Syria and Iraq. Obviously, if the Islamic State becomes powerful in Afghanistan, the situation will not be good for us either. Although I have full confidence in my Army, my government, experts and officials who specialise in the tactics of international politics, we also have to admit that the situation for India is very complex at this time vis-a-vis the Taliban and the Islamic State.

Afghanistan has always been friendly to us. However, there is no question of us having anything to do with the Taliban. Although the Taliban has tried to give the message of an open relationship by keeping itself away from the Kashmir issue, I don’t trust its words. It is completely under the influence of Pakistan and China who are our sworn enemies. The Lashkar-e-Taiba and Haqqani factions are part of the Taliban and it is well known that they keep looking for a reason to shed blood in Kashmir. The Taliban cannot and will not stop them because Pakistan and China will arm-twist them to provide shelter and training to terrorists to spread terror in India. Our strategy will decide how successful we are in stopping it! It is good to see that all the parties spoke in one voice during the all-party meeting on the issue of Afghanistan. All of them supported the government.

But the explosions at Kabul airport suddenly changed the whole scenario. Now, not only the Taliban but the Islamic State too has emerged as a major concern. The Islamic State was believed to have been weakened in Afghanistan, but it has shown its destructive strength once again. Islamic State has been present in Afghanistan since 2015, and to break its back, not only the Afghan forces and the US but also the Taliban have been attacking it. In 2019, all three together launched a campaign to eliminate Islamic State from Afghanistan, but IS also retaliated with several attacks. You may recall the incident of attack on a girls’ school in Kabul in May this year in which 85 lives were lost.

This time many doubts are also being raised about the attack on Kabul airport. First of all, on the way to Kabul airport, the Taliban have made blockades at many places. Every person is allowed to go ahead only after being thoroughly frisked, so how did the suspected attacker reach there with explosives? Are Islamic State terrorists present in Kabul too, disguised as Taliban? I think so. Secondly, who is going to benefit from these explosions? On the surface, IS wanted to harm the American army and they even managed to kill 13 US soldiers!

But if you look a little deeper, the Taliban is the direct beneficiary of Islamic State terror. The world knows that IS wants to usher in Caliphate rule globally. As far as Asia is concerned, it has also announced Khorasan province, which includes parts of Afghanistan, Pakistan, Iran, Bangladesh and India. On the contrary, the Taliban only talk about Afghanistan and are constantly trying to convince the world that they will not allow their soil to be used against any other country!

So, were these explosions carried out to create an atmosphere in favour of the Taliban? Isn’t Islamic State behind this? If it is not, then who is? This question is very crucial and intelligence agencies around the world will surely find out the truth. In case of the Kabul blasts, the US blamed Islamic State and its President Joe Biden too claimed that the American forces had killed the planners of the airport attack. But how can the world trust Biden? Former New York State Judge Jasmine Jeanine Pirro has exposed Biden’s every lie about Afghanistan in a TV programme with enough proof. Biden is also being heavily criticised in America.

However, as far as India is concerned, whatever we want to do, we will have to do it on our own. IS is a big threat to us but the Taliban cannot be underestimated either. For India, there is a devil on one side and a deep sea on the other. That is why I had written earlier also that at present there is no question of recognising the authority of the Taliban. We should wait patiently to see whether the government in Afghanistan is formed by the Taliban alone or other people share power with it? And the moot question is also what is the human rights situation there? As of now, we should keep ourselves prepared to tackle the threat of Islamic State. We should adopt a powerful and zero tolerance policy and effectively enforce it to completely destroy IS before it can take root in Kashmir or activate its sleeper cells anywhere in India. 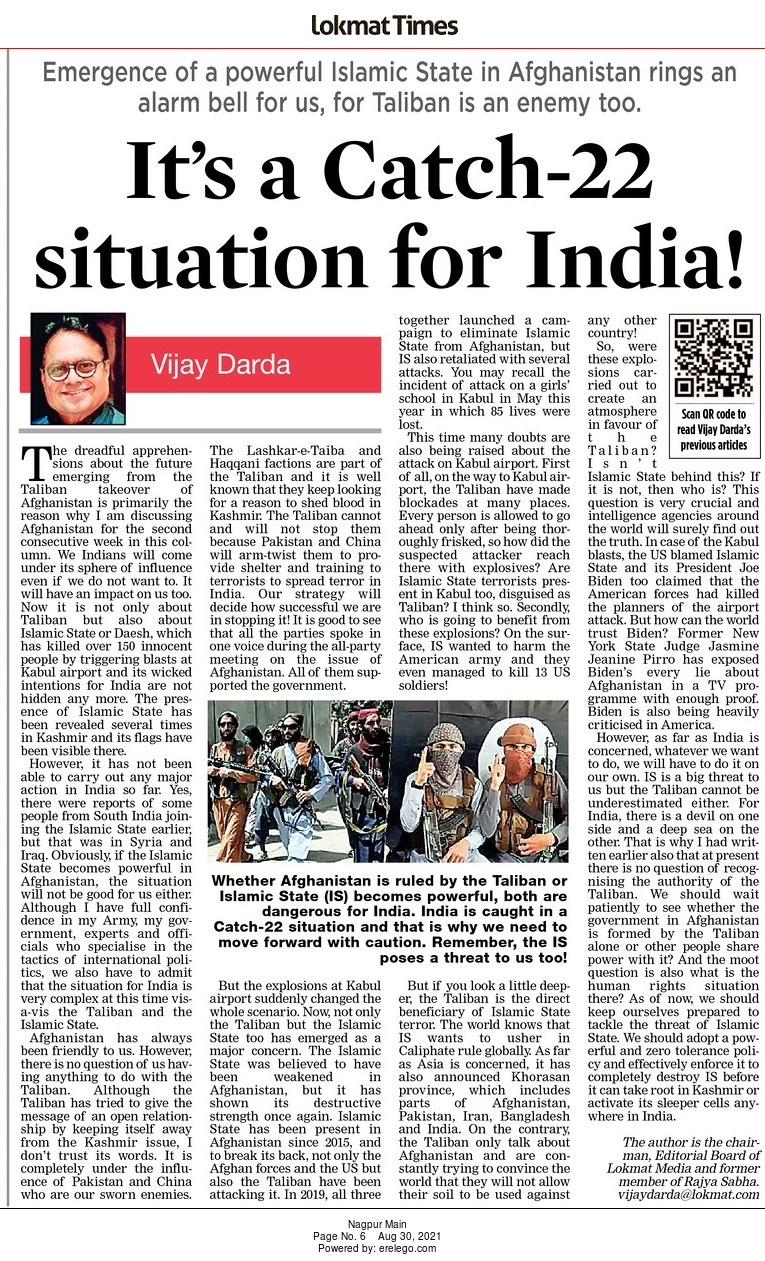 Searching peace via Kabul and Lahore