Union health minister Dr Harsh Vardhan (a medical doctor by profession) has made two sensitive statements that convey a bothersome mindset. First, he made the, “fidelity is better than condom”, declaration in an interview to the New York Times. Then, before this controversy could die down it emerged on his website that the ‘so-called sex education should be banned, yoga should be made compulsory’. His subsequent clarifications that he ‘is not for banning sex education per se, but vulgarity in sex education’ notwithstanding, the second observation is still there in the ‘vision’ section of the website. We must remember that the learned doctor has an unfulfilled desire to be the chief minister of Delhi so he has a comprehensive vision statement in the public domain.

While making these statements, the health minister has also placed emphasis on the fact that he is an ENT specialist, and that he has embraced rationalism and is all for things that are scientific and culturally acceptable. We can understand his emphasis on ‘rationalism’. This is purely aimed at deflecting any criticism that would stem from the argument that he is pushing the ‘obscurantist RSS ideology and practices’. But the question that emerges from these twin statements, and these have to be taken in conjunction, is whether he is concerned about sex or education?

The question arises from the fact that in the past the RSS and its wider ideological fraternity has always been against any sex education primarily on the grounds that such openness promotes promiscuity, increases experimentation and leads to irresponsible sexual behaviour. This opposition has been seen in action for the ‘sanction’ that violent organisations like Ram Sene and their sub-sects enjoy from the RSS establishment.

We must note that the health minister’s original idea about sex education is to banish it. It is baffling and one wonders as to how it matches with his claim of having ‘embraced rationalism.’ Learning about anything is quite an open and rational thing to do. Then by its very nature the use of the word ‘ban’ in any public discourse betrays a closed and oppressive mindset. If he is rational as he claims to be then as a medical doctor he should not be talking of such a ban. Of course, we do understand that there is a need to improve the course curriculum but the minister has been silent on this aspect.

It is worth recalling that some time back there were strong objections to the manner in which the subject was treated in the books that were to be prescribed for school students. At that time, a revered Jain religious leader Acharya Vijay Ratnasundar Surishwarji had led the campaign against such books and sought the Congress president Sonia Gandhi’s intervention in the matter. She too concurred with the objections and then the matter rested there.

Indeed, when there is a talk of sex education being culturally accepted, it needs to be pointed out even at the expense of stating the obvious that the most famous ‘do-it-yourself’ sex manual the renowned “Kamasutra” by Vatsayan has come from our ancient Hindu civilisation. So, if our educationists are liberated from the twin handcuffs of bureaucracy and political interference, they would surely come up with creative ways if imparting this knowledge without any vulgarity.

It is often said that beauty lies in the eyes of beholder, and going by the same logic ugliness should also lie in the eyes that behold it. Vulgarity is a matter of taste, and if anything, the process of education is also a lot about cultivating the right sensibilities in an impressionable mind. As we move ahead, should we talk about bans and closing the doors of learning or we should be encouraging creative ways of learning things?

The need of the hour for our new political masters is to appreciate the turmoil that is going through the minds of our young population. An age gap need not always translate into a generation gap in terms of thinking. If you adopt the right mindset then it is not rocket science to figure out the needs of the young generation. It has to be accepted that every generation changes in its own ways, but the basic human urges remain the same. Only the ways of satisfying these keep changing. Every generation rebels against the earlier one, and it craves for the freedom of action, and independence in thought. As the prime ministerial candidate when Narendra Modi was talking of change and hope then he was also taking the responsibility to ensure that the young in India get the right environment for their personal and collective growth without any hindrance or stifling restrictions. Now, it is his duty to ensure that they get all this and do not fall prey to any pitfalls. For politicians raising a new generation is a more complex responsibility than merely issuing edicts and diktats that govern the behavioural domain. Our ministers need to avoid this pattern, and surely a health minister should respect the values of individual freedom.

In the same way, when he talks about fidelity in marriage and safe sex, he confuses the issues involved in fighting the menace of AIDS. Whoever talks of marriage and sex in the same breath, simply betrays his poor understanding of a human process that is as old as Adam and Eve. Dr Harsh Vardhan overlooks the reality when he gives preference to fidelity over condoms. Indeed, it is his ‘exclusive’ mindset that dictates such an approach. Or else, he would have simply said that — Abstinence, Be Faithful, and Condom Use – ABC of the anti-AIDS campaign since decades is the right combination to tackle this problem.

One of the reasons for the Modi campaign’s success in the 2014 elections was that it got the messaging and its methodology right. It would be logical to expect when this has transformed into a ruling dispensation, there would be a greater efficacy in the communication of ideas and policies. Anything other than that would be a plain letdown. 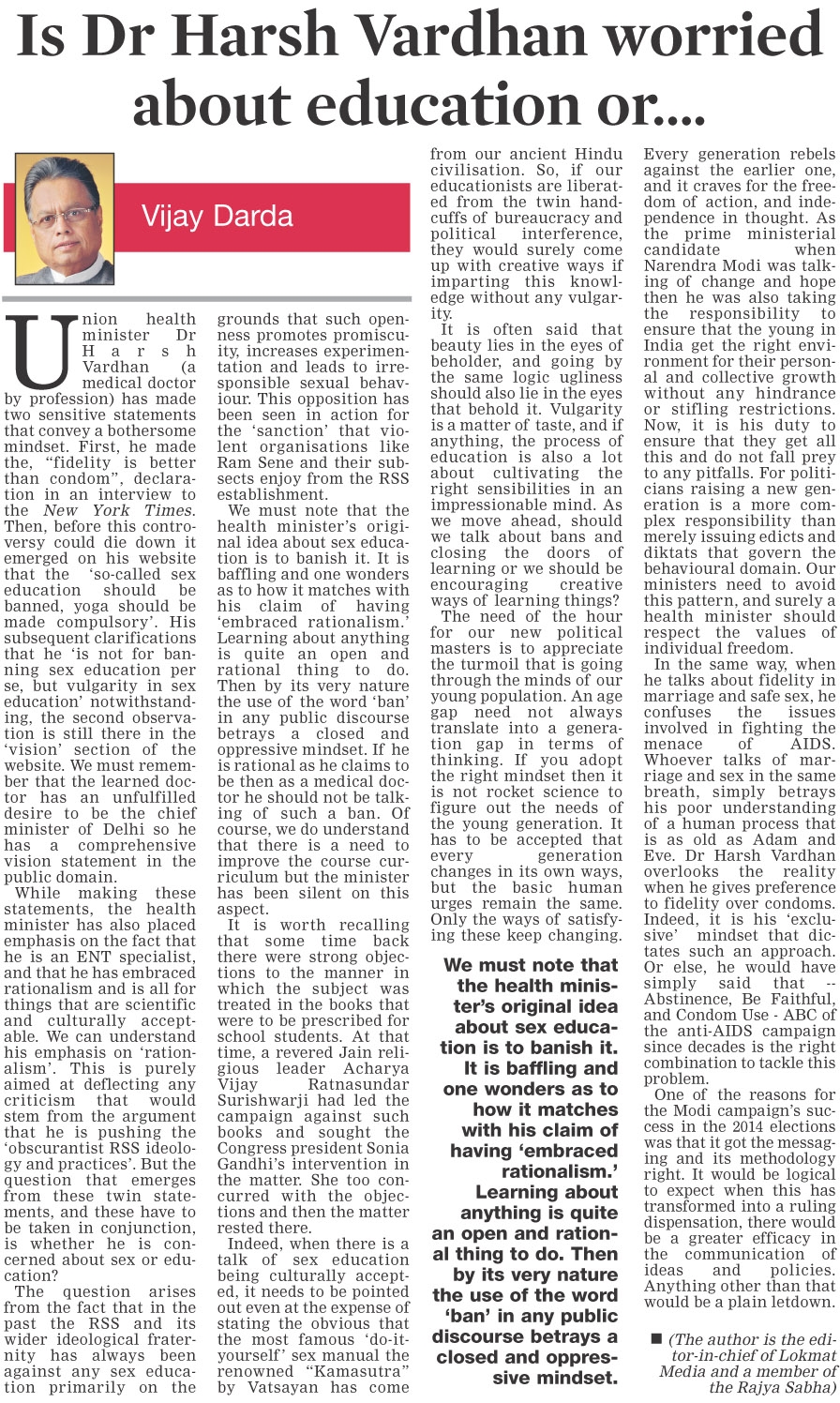