I am aware that some comparisons are not apt. For instance, there is nothing that is common between the army fighting a war, and the cricket team playing an international tournament. True in both cases the prestige of the nation is at stake, but that is the end of the comparison. In a war lives are lost. Our brave hearts get into the battlefield with the full knowledge that they could be losing their lives. Contrast this with the cricketers, they have simply nothing to lose, perhaps may be their place in the team.

So, why this comparison? It has struck me because the Indian team won the Champions Trophy around the same time as the soldiers were busy rescuing thousands of stranded persons from the hill state of Uttarakhand. It is a tragic coincidence, that 20 soldiers died in a helicopter crash around the time the Indian team won the Champions trophy. The societal reaction to both these separate events brought into sharp focus the disturbing distortions that are almost like a deep-seated social malady with us. We do not seem to realise that our soldiers are the real heroes, whereas the cricketers are best entertaining or performing heroes. We ignore the real ones, and celebrate the entertaining or performing ones. Surely, there is something deeply disturbing about a society that displays this malady.

It is not a question of just money. I am not on the issue of the fact that cricketers get paid more than the soldiers or that the bounty for them is massive when compared with the pittance the kin of the dead soldiers get from the governments. We seem to believe that the soldiers or the members of security forces are the paid employees of the government, and in return they have to give up their lives, whenever the situation calls for it. Indeed, when the soldiers died in the crash, the Air Force chief N A K Browne said:”I told my troops like in a war, you have to just keep going on.” To show his solidarity with his men, he also flew in the same Mi-17 chopper that was engaged in the relief operations.

My problem is with the society’s sense of involvement in these matters. I strongly believe that if this sense of involvement is there, then the other corrections would come on their own. The absence of this involvement is clearly a proof of our lack of national concerns. The people’s mood swings with the performance of Virat Kohli or M S Dhoni anyone of their favourites, and people at all level are glued to their television screens or the device that brings them the latest score when the game is on. This happens all over the country, cutting across all barriers. This precisely is the reason as to why cricket is more like a religion and less like a game for us. But then a soldier is a nameless and a formless thing for our collective mindset. At best the level of interest goes up when someone from our city or state becomes the victim. Then perhaps the local newspapers, and may be the state government makes a token gesture that goes just an extra step. But the fact is that we have miles to go in this context.

I am compelled to recall an event that is etched deeply on my mindscape. The time when Lata Mangeshkar brought tears into the eyes of Pandit Jawaharlal Nehru with Kavi Pradeep’s immortal lines – Jab hum baithe the gharon mein wo jhel rahe the goli – in 1962. It is this song that reminds us that being a soldier is not an ordinary government job. It signifies the commitment and the bravery of a person who realises and accepts his duty to protect, the nation and thereby all of us with the fore knowledge that he would have to pay the ultimate price. His readiness to sacrifice his life, places him on a higher moral pedestal. Not just his readiness, but the fact that all his near and dear ones are also prepared to accept this eventuality enhances this spirit of sacrifice. After all, it is they who have to live with the obstacles of living after this void comes into their life.

At our own level, we at the Lokmat have always contributed to the best of our ability for the cause of rebuilding the lives of the people caught in various tragedies. There are several projects that we have undertaken in the past, and this sense of responsibility is a matter of corporate concern for us.

But I strongly feel that cash rich organisations like the BCCI and even the corporates should be more than forthcoming in opening up their coffers and loosen their purse strings at such times. For instance, if they were quick to announce a crore each for the members of the Champions trophy winning team, they would not have lost much money if they had a similar gesture for the soldiers who died in the chopper crash. If anything they would have earned the much needed goodwill of the people, and perhaps white-washed their match-fixing or betting sins a bit. Similarly, the corporates who have made their millions while running chopper services in the hill state of Uttarakhand to ferry more pilgrims and thus create the rush that actually magnified the tragedy have been remarkably unresponsive to it. Indeed, it is because of this aloofness at such critical junctures that they contribute to the widely held impression that profit is a dirty word. Indeed, there is a need for all of them to institute a proper mechanism for responses to such tragedies.

The more disturbing thing is that this mindset has been in existence for a long time, and we seem to be failing on every occasion, when tragedy strikes. All that happens is that we momentarily moan about it, and then get back to business as usual. Indeed, this attitude only complicates the matters. It is time that we start respecting our real heroes, and may be then we would also be better prepared for facing such eventualities. 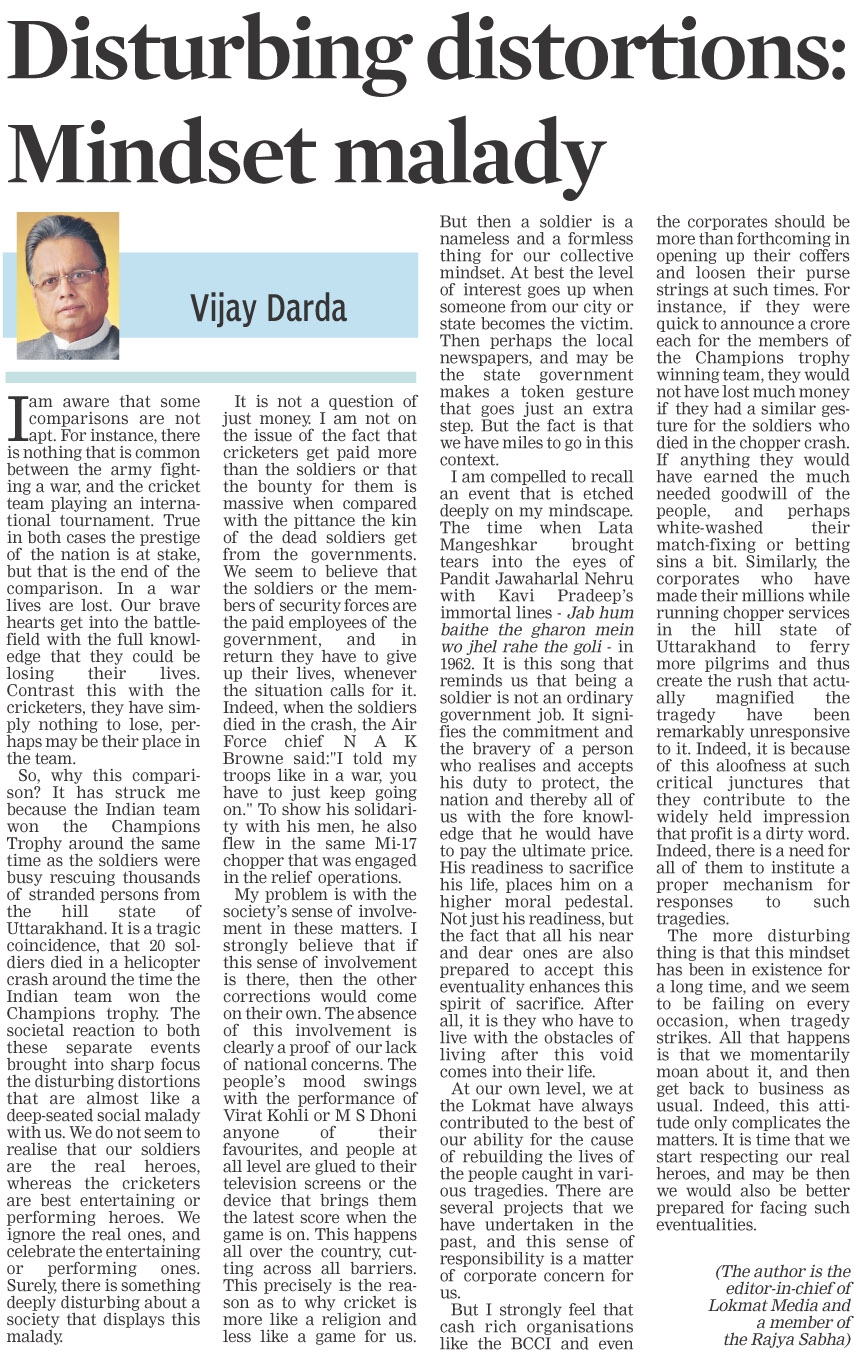