There is no need to feel disheartened, hurdles pave the way to success, we will soon touch the Moon

Though we might not have attained the outcome we were expecting from Chandrayaan-2, yet we must not call this campaign an unsuccessful one. Chandrayaan-2 covered a distance of about 3.80 lakh kilometres after starting its journey from the Earth on 22 July. As Vikram began the 15-minute autonomous descent, which the scientists termed as “15 minutes of terror”, it overcame a major hurdle of what is called as the rough braking phase. But then Vikram deviated from its trajectory at 2.1 kilometres from lunar surface and lost contact with the ground station shortly thereafter! I totally agree with the Prime Minister that the journey of Chandrayaan-2 was extraordinary. It was simply spectacular!

I have seen our scientists working at ISRO. I had an opportunity to interact with them. I have full faith in our scientists and with that confidence I can say that we will touch the Moon soon. Our scientists always dream of doing something new. They are passionate about doing something new, so technical problems do not bother them, and therefore, they start looking for solutions with fresh enthusiasm. Similar will be the case this time too. Soon, they will be executing a new mission.

An example of how strong the resolve of our scientists is can be gauged from their association with this Chandrayaan-2 mission. It was going to be a joint collaborative mission between India and Russia. In 2007, ISRO signed a contract with Russia and it was decided that a lander and rover would be sent to the south pole of the Moon where no country has been able to soft-land its spacecraft. The then Prime Minister Manmohan Singh approved this ambitious mission in 2008.

In this mission, we were going to get a lander from Russia. It is not known why Russia kept postponing the issue of lander and in 2016 it flatly refused to give lander. Our scientists took it as a challenge and decided to develop our own lander. In a span of only two years, they pulled off this miracle! This lander (Vikram), named after Vikram Sarabhai, the father of the Indian space programme, is completely Indian. A tribute to our own scientists!

How courageous our scientists are was amply proved when it was decided to prepare the launch site. At the time, Dr Homi Bhabha and Vikram Sarabhai were moving around looking for a place best suited for the launch site. Eventually they reached Thumba, a fishermen’s village near Trivandrum. Thumba is near Magnetic Equator so it was selected. The problem was that a very old church existed in that area. Vikram Sarabhai sought help from politicians and officials, but everyone said it is not possible to remove the church. So one day Sarabhai went to Bishop Peter Bernard Pereira of the church and apprised him of his plans.

The Bishop did not immediately respond but invited him to the Sunday prayer meeting! Sarabhai reached there on Sunday. Bishop Peter Bernard Pereira told the laity present in the prayer meeting that there is a famous scientist here with me who wants this place from us for space research. Science brings the truth to the fore and helps to improve human life. I try to bring peace in the minds of people through religion. This means that what I am doing or Vikram Sarabhai is doing is the same. Sarabhai has assured me that a new church will be built in 6 months. Are we ready to give them this house of God, my house and your house? A voice came from among the congregation- Amen! It is evident that it was Vikram Sarabhai’s effort that led to Thumba being developed as a launch site. On 21 November 1963, India launched a sounding rocket, which marked the beginning of the Indian space programme.

Do not look upon Chandrayaan-2 mission as a failure. Look at the amazing genius of our scientists who took Vikram to the Moon. Our scientists will surely analyse the reason why Vikram deviated from its path when it was just 2.1 kilometres off the Moon and lost contact close to lunar surface! 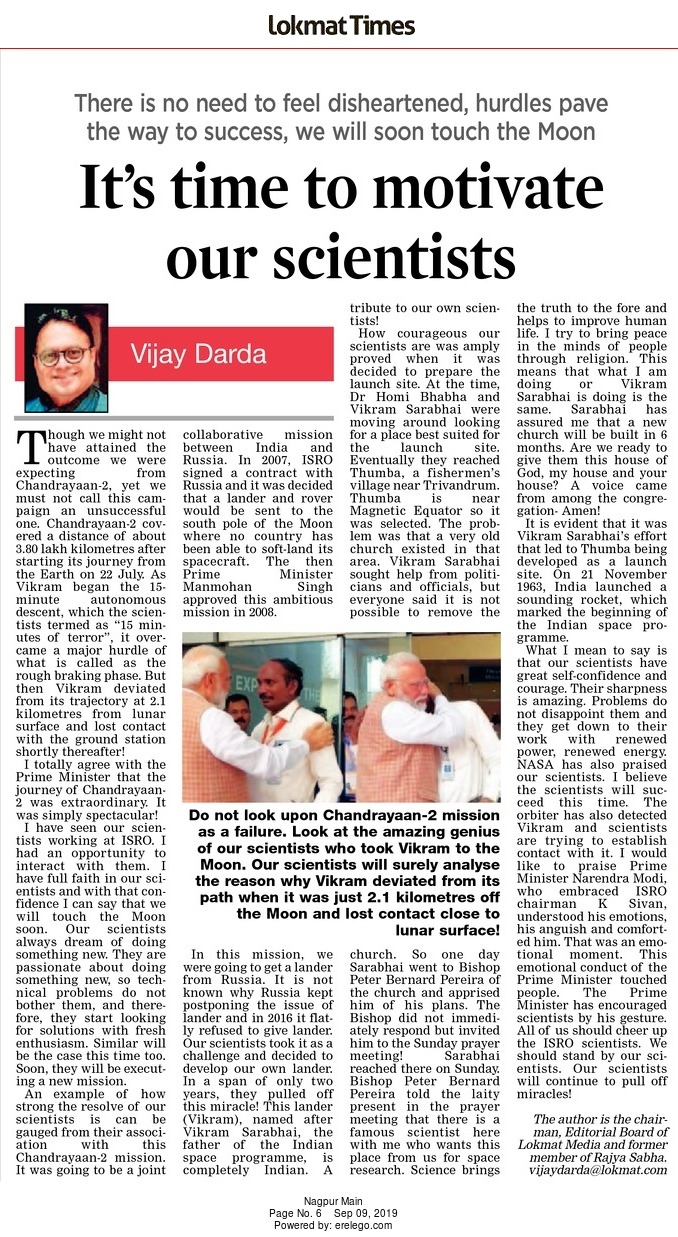 Our scientists have tremendous talent

Saluting achievement of our scientists