Our scientists have tremendous talent

Our ISRO is producing one wonder after another and the day is not far when an Indian will land on the Moon!

When many people in India stayed awake on July 15 to see the Chandrayaan-2 blast off into space, I was in Austria and it was not even midnight there. By the time I turned to the TV, I got the news that departure had been postponed. In fact, the satellite was to be launched in October 2018 but it was postponed. Then it was shelved to January 3, then January 31 and finally the date of July 15 was fixed. When the launching was put off on that day, naturally most people were disappointed, but I was not disappointed at all because I had full faith that our scientists would overcome the snags.

The reason for this confidence was that I have seen the hard work and dedication of ISRO scientists in Sriharikota as a member of the Joint Parliamentary Committee. Some five years back I got this opportunity to visit that important centre. Even in the air-conditioned room, I had seen beads of sweat on their forehead. I had a long conversation with the scientists about how important every launching is to them and how tense they get even as the date of the launch approaches. It is due to the result of their hard work that the launch of Chandrayaan-2 has been scheduled on July 22.

This occasion of launch of Chandrayaan-2 is also important in the sense that just two days back the world celebrated the fiftieth anniversary of the first landing of man on the Moon. On July 20, 1969, US citizen Neil Armstrong took the first step on the Moon. Very soon Indian scientists are going to achieve that kind of amazing feat. In the form of Mangalyaan, our scientists had wowed the world; Chandrayaan-2 is also going to do wonders. Even many developed countries of the world have not been able to attempt this amazing feat yet. India will be the first country to land on the southern pole of the Moon.

India’s achievement is also important because we launched the first satellite ‘Aryabhatta’ with the Russian rocket. The first communication satellite ‘Apple’ also had foreign cooperation. The photograph of ‘Apple’ being carried on the bullock cart became famous around the world. What I mean to say is that once we used to travel by bullock cart and today our scientists have achieved the amazing feat of launching 104 satellites together. As Prime Minister Narendra Modi has announced, if we land an Indian on the Moon, then it will be a big deal. I hope that our scientists will definitely achieve this great wonder. Preparations have already begun.

There is no doubt that the credit for all of these achievements goes to our scientists, but equally great has been the contribution of our leadership to this endeavour. After the country’s independence, there were several challenges before the first Prime Minister Jawaharlal Nehru, but he did not allow the challenge of leading the newly born nation to overshadow our dream. Fortunately, the great scientist Vikram Sarabhai was present at that time, who himself was dreaming big in the field of space science. It was the result of the meeting of both that the Indian National Space Research Committee came into existence in 1962. After seven years, ISRO was established on August 15, 1969. I would like to give an example of how far-sighted Sarabhai was.

At that time the television was not accessible to the common people in India, and then some day he dreamed that television is promoting education and information in the village. For this dream to realise, satellites will have to be set up, he thought. One of his fellow scientists asked how this would happen, he confidently said India would not only set up a satellite but the TV would also reach every village. We will have to work harder! Today Sarabhai’s dream has come true. Every house has TV, education is there. India is a power to reckon with in the world of space. I congratulate the country’s scientists on this happy occasion and also want to urge the new generation to grow faster in the field of science. There is no doubt that science is the most powerful medium of progress. The countries of the world which have also incorporated science into their working style are at the top. We also have to reach the top and very quickly.

Maharashtra chief minister Devendra Fadnavis will be celebrating his 50th birthday on Monday. Over the past five years, he has proved his innate leadership qualities. He has expressed his determination to return as the chief minister for rebuilding Maharashtra. Fadnavis has been successful in moulding his image as the leader who is well versed with problems faced by Maharashtra and who is capable of finding solutions and effectively implementing them. While piloting the ship of the state during the last five years, Fadnavis encountered many obstacles, but he looked at them as opportunities. It is in his nature to solve any problem without any prejudice and this trait has come to him from his parents’ moral values. I wish him all the best for future!

If everything goes as planned, Chandrayaan-2 would be launched in the afternoon to land on the southern pole of the Moon. It will be no less than wonder because no country in the world has been able to land its satellite in this area of the Moon. Our scientists really have amazing talent. 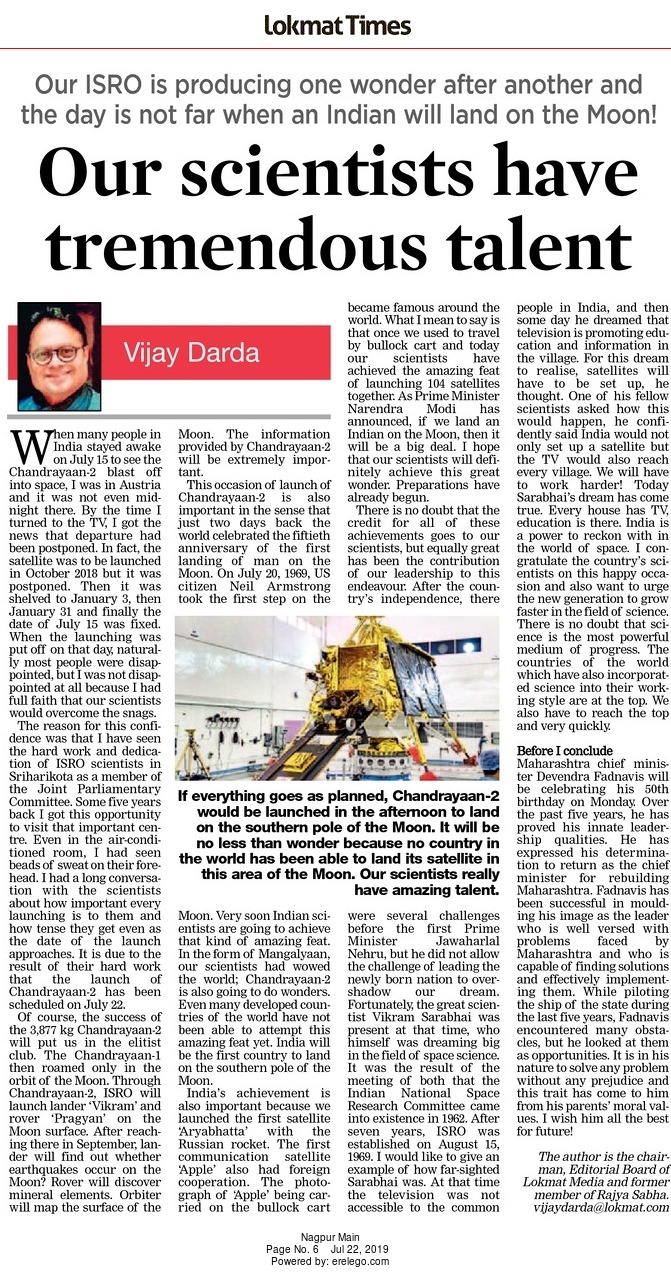 Saluting achievement of our scientists