Knowing your limits is knowing the Constitution!

Vacuum does not auger well for the places of power and authority. Those places should always be occupied. If the persons or officials occupying any place of power or authority are not powerful enough and fail to exercise their authority properly, there are always efficient people in their area to replace them.

I am witness to the hesitation which the central government finds itself in due to the compulsion of a coalition for 14 years now. I also witnessed how the higher judiciary became more and more active as the indisposition of the government grew. During this period, the courts issued directives to the government on policy matters, gave guidelines to Parliament on its stand on matters pertaining to the law and Constitution and at times also made observations which can be described as but political. It has happened almost regularly during this period.

Several orders of the administration were set aside by the courts citing debatable reasons. The court asked the Lok Sabha Speaker to appear before it and also sought to provide constitutional and human rights cover to the Naxalites who have already been declared terrorists by the government and who have no respect for the democratic set-up or law of the land.

America too has a history of such developments and incidents.  The world has seen how audacious the judges in America had become and begun to claim, “We are Constitution. America is a state governed by its Constitution. But we have the authority to interpret it. Therefore, what we say is Constitution.”

In India also, the country saw certain developments and situations in the recent past which raised apprehension whether there is a ‘Government by Judges’. In this background, the Chief Justice of India Justice S H Kapadia’s piece of advice to the judges to go strictly by the constitutional principles should be welcomed by one and all. “Judges should not govern this country. We need to go by strict principle. Whenever you lay down a law, it should not interfere with governance… Objectivity and certainty enshrined in the basic principles of the Constitution have to be given weightage,” Justice Kapadia recently said.

During a function at Mumbai also, the Chief Justice of India had reiterated his stand on this issue in the presence of the prime minister. “Judiciary should work within its Constitutional limits. It should ensure that it is not encroaching upon the authority of the government and Parliament,” he had categorically said. Not stopping at that, he had asked his colleague judges, “The government and the administration have the authority to implement our order. What if tomorrow the government and the administration decide against implementing your order?”

I have personally experienced the hurdles created in the very functioning of Parliament and the government due to the undue interference of the court on several occasions in the last several years as an MP. Therefore, I heartily welcome the stand taken by Justice Kapadia. I believe this knowledge of one’s limits reflected one’s knowledge of the Constitution.

Government taking a decision and the court banning it or Parliament seeking to pass an act and court blocking it in the name of Constitution, does this not encroach upon the government’s authority? The court’s decision to monitor any economic offence which is the work of the administration or its decision on what should be the height of Ganesh idols in Mumbai or its interference in deciding which ground should be given to which party for any function, all this not only amounted to encroachment on the government and administration’s authority but is also an example of how unrestrained the judiciary has become. The country has also faced the consequences of not checking such instances.

Former Speaker of Lok Sabha and a Constitutional expert Bar. Somnath Chatterjee openly told the Supreme Court that he will not abide by any of its orders. Similarly, the West Bengal chief minister Mamata Banerjee declared the other day that she will reiterate a thousand times the corruption charges she had made against judiciary.

A top police official had recently asked the court, “You want us to end the maoists’ menace with tied hands.” Needless to mention that a petition has been filed before the Supreme Court itself alleging that many of those who held the post of Chief Justice of India so far were corrupt. The list of charges of corruption against the judges of High Courts, district courts and taluka-level courts too is quite long. This is not only denting the reputation of judiciary but also giving an impression that such a tarnished judicial system is trying to control the government.

I agree that the Constitution has given judiciary the right to examine constitutional validity of the government orders and law. But if the judiciary starts exceeding its rights and banning the decisions of the Parliament and the government, it definitely becomes a matter of debate. Even the higher judiciary in the country has not been vested with the authority to examine the intention or consequences of any law which the federal courts in America have. Our courts have limited authority to see whether the government and the Parliament honour the Constitutional boundaries or not and they are expected to do only that. It is for this reason that I was forced to write in these columns in ‘Lokmat Times’ an article titled “Who is to judge the judges?”

Let us remember the recent instance of differences between the government and the judiciary in our neighbourhood, Pakistan. The Supreme Court there is completely controlled by military officials and totally against democratically elected government.

After forcing the then prime minister Yusuf Raza Gilani out, the judiciary there is now seeking resignation of the new prime minister. Challenging this attitude of the Supreme Court there, Gilani said the other day, “If you continue to play political games the way you are doing now, then we as the government also will have to rise against you.”

I am sure the judiciary in India will not allow the situation to deteriorate so much. And I am confident about it. 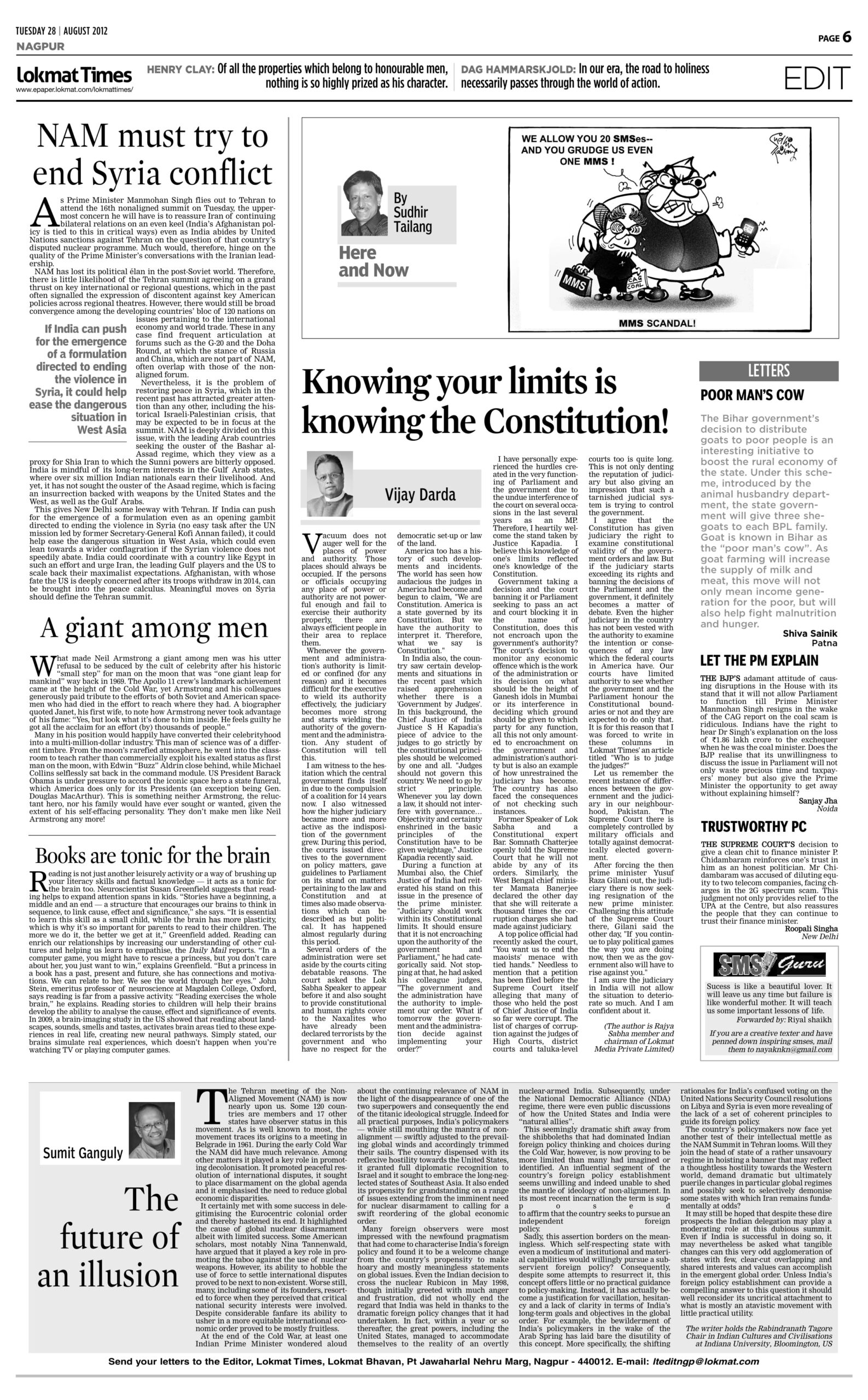