Ram Rajya means creation of a society where there is no discrimination based on caste, religion, sect, rich or poor

It is a matter of great relief for everyone that a controversial chapter in the history of the country has come to an end. Prime Minister Narendra Modi has performed bhoomipujan of Ram temple in Ayodhya and soon it will be built too. The construction of the mosque in Ayodhya itself will start in the days to come. There is going to be a fair amount of support for the mosque as well. We should be grateful to the Supreme Court, which brought down the curtain on this temple-mosque dispute. The best thing is that the decision of the court was accepted by both parties.

Even in this terrible crisis of the pandemic, when the Prime Minister decided to attend the bhoomipujan ceremony of the Ram temple, the purpose was clear that this chapter should now come to an end and lead to the creation of an atmosphere of bonhomie and brotherhood in the country. This dispute has caused a lot of damage to the country. No such dispute should arise now. It is not a victory or a defeat for anyone. The restraint shown by both sides should be appreciated. It is true that the Hindus outnumber any other community in this country but our Constitution does not discriminate against anyone on the basis of religion, caste, faith and economic status. Be it Hindu, Muslim, Sikh, Buddhist, Jain, Christian, Parsi or atheist, our Constitution gives everyone equal rights. There is no need to be scared of anyone. This country belongs to everyone.

That’s why we all proudly say, “Saare jahan se accha Hindustan hamara…” But there are some people who vitiate the atmosphere and the entire nation has to pay for it. Incidents like mob lynching, rioting, rumour-mongering and inciting communal passion should stop. It is the responsibility of either side not to give external elements a chance to do mischief. I appreciate Iqbal Ansari, who was fighting in the court for the mosque, but attended the foundation stone laying ceremony of the Ram temple. Similarly, in a rare example of communal harmony, many Muslim sisters, breaking the tradition, performed Ram Lalla’s aarti (worship).

Of course, we all have the responsibility to take everyone along, but those who happen to be in the government have a greater responsibility. There should be clear and strict instructions from the Prime Minister that no mischievous organisation or person will be spared. Old differences should be forgotten now and we should follow a new path of peace and harmony so that our country can move on the path of progress. We have the challenge to fight poverty, illiteracy and hunger. We are also facing the challenge of dealing with the terrible coronavirus pandemic. We need to battle it unitedly so that days of prosperity could be ushered in.

The Prime Minister has reaffirmed himself to achieve ‘Sabka saath, sabka vikas, sabka vishwas’. I urge that now ‘Ram Rajya’, in true sense of the word, should be ushered in. Let me make it clear here that Ram Rajya does not mean any particular religion nor does it mean worship and veneration of Lord Ram. Ram Rajya means to establish such a governance as ‘Maryada Purushottam’ Lord Rama did; where no one is hungry, no one is persecuted, all remain fearless, can breathe in a fear-free environment and even the last person of the society is cared for. In today’s situation, the pandemic has aggravated the issue of unemployment. The Prime Minister should pay special attention to this issue. If the common man remains unhappy and feels troubled, the concept of Ram Rajya will not come true nor will it make Lord Rama happy.

The concept of Ram Rajya is not new. Mahatma Gandhi, the Father of the Nation, had also visualised Ram Rajya for independent India. His entire conduct was also in line with that idea. He also embraced the weaker sections of the society. In 1989, Rajiv Gandhi too talked about Ram Rajya while launching the election campaign from Faizabad. When Rajiv Gandhi invoked Ram Rajya in his speech and it caused a flutter in the Congress. There was no mention of Ram Rajya in his original speech which was written by his close confidante Mani Shankar Aiyar! At that time, I had met Rajiv Gandhi and discussed with him about his concept of Ram Rajya in his speech along with the discussion on Kashmir, Bodo problem and formation of separate Vidarbha state. Actually, it was not a slip of the tongue. Rajiv ji used the word ‘Ram Rajya’ extremely thoughtfully. He wanted to give the message of building an India where there is no discrimination and people of all religions and sects should live without fear.

Nobody can doubt Rajiv ji’s commitment to secularism and his trust in democracy. He respected and understood the practices and principles of all religions. Actually, the allegation against the Congress party that it ignored Hindus is absolutely false. The Congress is a party that believes in equality. Congress knows the heart and mind of Hindu community. It was Rajiv Gandhi who inspired Ramanand Sagar to make ‘Ramayana’ serial. The Ramayana, broadcast in 1987–88, was watched by 250 crore people across 55 countries. Rajiv ji wanted the whole country to understand Lord Rama in the true sense. It was Rajiv Gandhi who gave permission to the Vishwa Hindu Parishad in 1989 to lay the foundation stone of the proposed temple. Rather, he also sent his home minister Buta Singh to Ayodhya to participate in the foundation stone laying ceremony. Rajiv Gandhi was not taking any political advantage but he wanted to establish an ideal governance system like Ram Rajya in our country so that the concept of ‘Bahujan hitaya, bahujan sukhaya’ can be realised.

Allama Iqbal wrote, “Mazhab nahin sikhata aapas mein bair rakhna, Hindi hain ham watan hain Hindustan hamara..!” Unfortunately, the country has suffered a lot in the name of religion. Now is the time to forget the controversial history and dedicate ourselves to create a strong society. We need to write a new chapter which the future generations should be proud of. 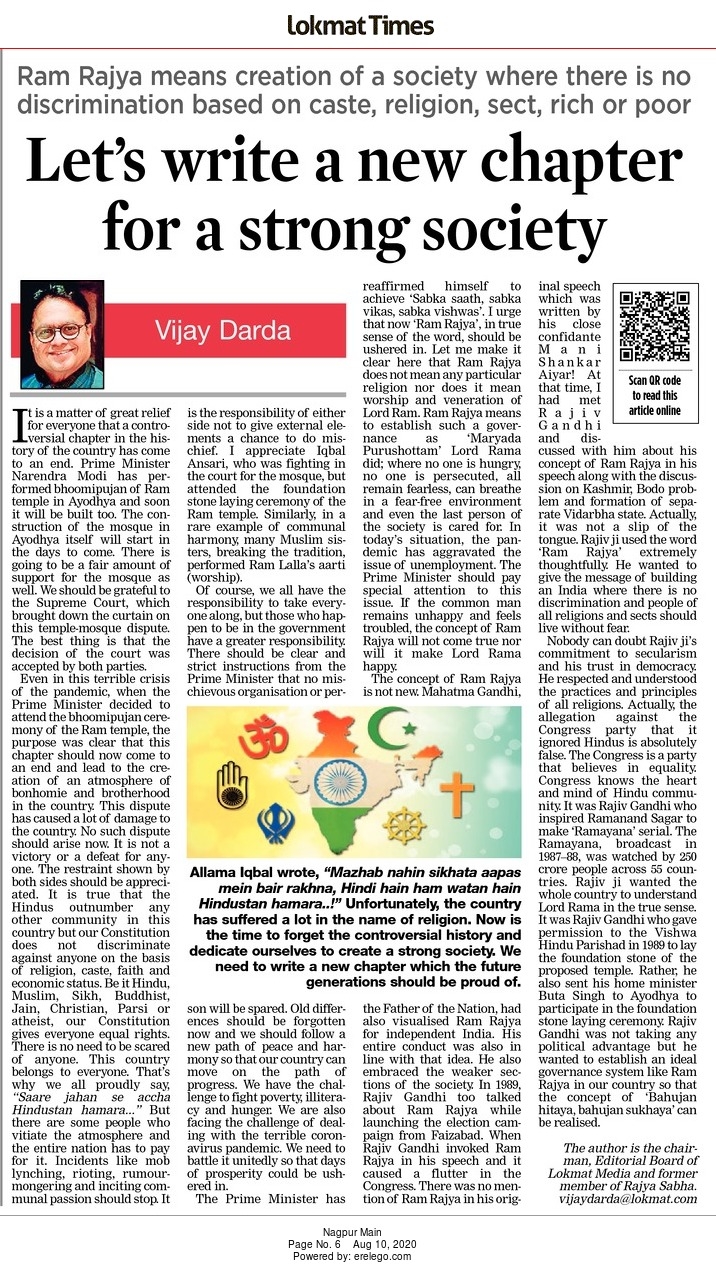