The moment for which we all waited for years has finally arrived. A legal dispute being contested for more than 134 years, has finally been decided by the Supreme Court of the country. The Constitution Bench of five judges has delivered a unanimous verdict basing it completely on scientific evidence. The right of Lord Ram’s birthplace has been given to Ram Lalla and the government has been directed to form a trust within three months for the construction of the temple. The apex court also ruled that five acres of land be given to the Muslims in Ayodhya itself for the construction of mosque.

Unquestionably, it is important to get justice, but even more important is how justice was delivered and what procedure was adopted for it. The Supreme Court considered the report of the Archeological Survey of India as the basis. It is certainly a very balanced and holistic decision. The Muslim litigant Hashim Ansari’s son and present litigant Iqbal Ansari too has described the verdict as “better” and said he does not consider it as his defeat. Now there is no dispute. I appreciate Ansariji’s feelings.

I fully agree with Prime Minister Narendra Modi ji and Rashtriya Swayamsevak Sangh chief Mohan Bhagwat ji and welcome their statements that this verdict is neither a victory nor a defeat for anyone. There should be neither celebration nor sorrow. Modi ji has rightly tweeted that be it Ram Bhakti or Rahim Bhakti, this is the time of Bharat Bhakti for us all. I would like to appreciate Congress president Sonia Gandhi, who convened a meeting of the Congress Working Committee immediately after the decision of the apex court and spoke of respecting the verdict. She also expressed her feelings in favour of building Ram temple and appealed to the people to maintain communal harmony. I appreciate the chief ministers of BJP-ruled states and Congress-ruled states and especially Mamata Banerjee for creating an atmosphere conducive for maintaining communal harmony in their respective states and ensuring that nothing untoward happens.

It is a matter of great satisfaction that police and intelligence machinery in various states performed their duty with alacrity. As a result, frenzied reactions did not come on the social media after the verdict was delivered. The social media which turns restive at the drop of hat remained silent. I am pretty convinced that religion is our faith. We respect our faith, others respect their faith. Actually everyone’s faith should be respected. But when it comes to the country, we should rise above our respective faiths and uphold nationalism. India is fortunate in this context as the nation comes first for every citizen. We may follow any religion, believe in any mode of worship, but when it comes to the country, we are all one. The biggest reason for this unity is our communal harmony. This is our real strength. We have to maintain this strength under any circumstances.
Let me tell you a unique example of brotherhood.

The Ram temple litigant Ramchandra Das Paramhans and Babri mosque litigant Hashim Ansari fought this case in the court for nearly 60 years, but both of them were very good friends. They always shared the same rickshaw while going to the court and returning back home. People would wonder but they used to say that our fight is ideological and therefore, why it should affect our friendship? Now both have passed away but the stories of their friendship in Ayodhya are still talked about. After returning home in the evening, the duo also used to play cards together, but never talked about the temple-mosque dispute. The history too is replete with stories when a Muslim ruler gave his estate for a temple or Hindus gave their land to build a mosque. In the 18th century when scores of fundamentalists had gathered to raze a temple, the Nawab of Bengal Siraj ud-Daulah had sent his army to stop them. Not only did he send his army but also eliminated hundreds of fundamentalists.

What I meant to say is that Ganga-Jamuni tehzeeb (culture) has been the biggest strength of this country. We have to uphold this strength. We need to be more vigilant, especially at this sensitive hour. We have to ensure that communal harmony is maintained at all costs. We have to thwart every attempt to disturb peace so that our social harmony and brotherhood is not affected adversely… and we are able to say with pride: Saare jahan se accha Hindustan hamara!

Let us look at the verdict delivered by the Supreme Court on the Ayodhya issue as the end of a legal dispute. Faith is definitely important for us, but more important than that is our country. Communal harmony and brotherhood are its biggest strength. It is because of this communal harmony and brotherhood that we are able to say with pride: Saare jahan se accha Hindustan hamara! 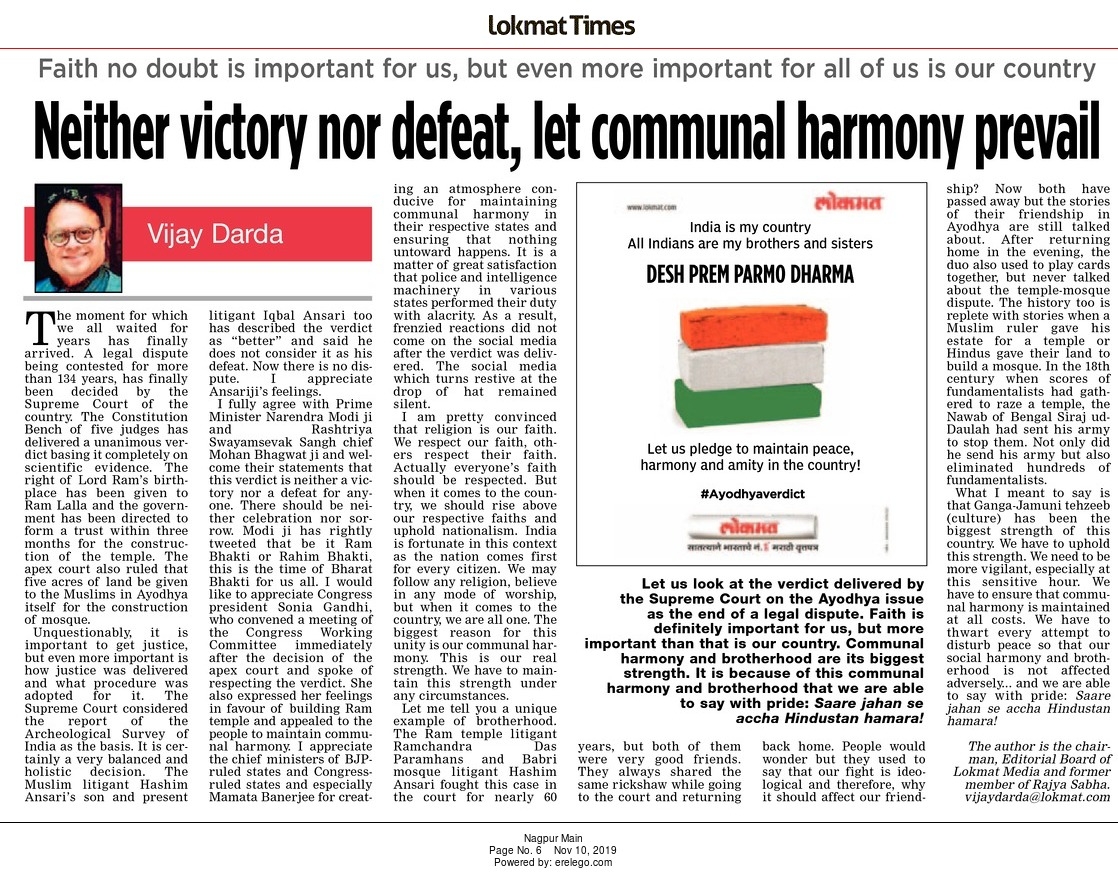