There is an emphatic clarity in the 4-0 verdict against the Congress party in the results of the assembly elections from the Hindi heartland. It’s a dark Sunday for the ruling party and for the next General Elections due within six months. The warning bells could not have been sounded with more clarity. The Congress president Sonia Gandhi said it all in three words “very very disappointed.”

The people have spoken with one voice through different states — Delhi, Madhya Pradesh, Rajasthan and Chhattisgarh. Though the leaders of the Bharatiya Janata Party would like to proclaim it as a positive vote for themselves and their newly-anointed leader Narendra Modi, let there be no mistake, this actually is an anti-Congress vote. The unexpected results in favour of the debutant Aam Aadmi Party that came close to forming the government on its own in the national capital of Delhi with 27 out of 70 seats give us the clearest indicator of this message. The people who are dissatisfied with the Congress are not really enamoured with the BJP, and so in desperation they have opted for a rookie party. We should not forget that the AAP was dismissed lightly by both the Congress and the BJP leaders as something of no consequence. It was at best seen as a spoiler, and the pre-poll debate centred on which party would be the loser on this count.

So, it would be worthwhile to look at the issues that were raised by the AAP, and that caught the people’s imagination. The AAP is a product of the anti-corruption movement that was launched under the leadership of Anna Hazare, and then it took up issues like price rise and the gang-rape of the young woman in Delhi. Now, for the established political parties, these are business as usual issues. They believe that the people are not swayed by such matters when it comes to voting, and assume that issues like caste, community and religion matter more at the time of exercising the franchise at the EVM. In Delhi, AAP has struck at the root of these assumptions.

It would be useful to appreciate that for the last 10 years, the UPA’s rule at the Centre has been synonymous with the Congress party. The Congress is the face of this coalition arrangement, and all the scams and cases of corruption that have been making headlines for the last 10 years, ultimately damage the party. The AAP has benefitted from this scenario, and the BJP is also the inadvertent beneficiary.

In the two BJP ruled states, Chhattisgarh and Madhya Pradesh, the Congress as an Opposition party has failed to dent the image of the two chief ministers — Raman Singh  and Shivraj Singh Chauhan. So, even with the individual ministers and legislators facing corruption charges, the party has been able to retain its hold in these two states. The Congress does have its organisational issues in both the states, as the competing personal ambitions of the state leaders have always extracted a heavy price. Besides, the fact that a Congress-led government at the Centre is widely perceived by the people as the root cause of their day-to- day problems like price rise or the value of the rupee vis-a-vis the dollar also comes into play. So, the Congress has to accept that it cannot differentiate between the state and national elections, when it comes to owning up the responsibility for the basic governance issues.

Internally for the Congress, the good thing about these setbacks is that these were foretold by well-meaning voices within the party. The pitfalls had been already indicated but then these were ignored by the decision makers.  May be, some better sense would prevail now.

Now, in retrospect, the BJP success looks spectacular, but then just as in cricket bad bowling makes even ordinary batting look good, similarly in politics the electoral successes of ordinary chief ministers look spectacular when their administrative records are not brilliant. It is for this reason, that neither the two chief ministers getting their third successive term nor the BJP prime ministerial candidate Narendra Modi can hope to gain much additional mileage from the outcome of these elections for the 2014 general elections. In Chhattisgarh, the BJP already has 10 out of the 11 Lok Sabha seats, and in Madhya Pradesh too the party has 17 out of the 29 seats. Then again, the same results were obtained in the 2003, elections and the BJP had come a cropper in the Lok Sabha elections held within six months.

In the national scene, the BJP has a much wider challenge to increase its tally from the existing figure of less than 120 Lok Sabha seats to more than 200, as it has already maximised its strength in the states where it faces the Congress as the main rival. The challenge now for the BJP is to increase its tally vis-a-vis non-Congress parties, and as the Delhi election has indicated, this task is rendered more difficult in the unfolding scenario. The gains for the anti-incumbency of the Congress rule could be easily harvested by non-BJP parties in different states.

The skills of a leader are tested when the chips are down. The Congress president Sonia Gandhi has proved her credentials in 2004, and during the course of several state elections in the past. It would be reasonable to expect that with her being in command for the 2014 elections and the Congress vice-president Rahul Gandhi playing the hands-on role, the party would be able once again to gear up to this challenge. After all, such setbacks have not taken place for the first time in the history of the party, and both its leadership and the rank and file have shown the energy and the resilience to bounce back.

But this would have to be achieved in an increasingly hostile atmosphere and it should be expected that with this morale boosting victories, the BJP would make the functioning of the UPA-2 government for the remaining six months an increasingly tough task. Not that they were any friendly prior to these elections. 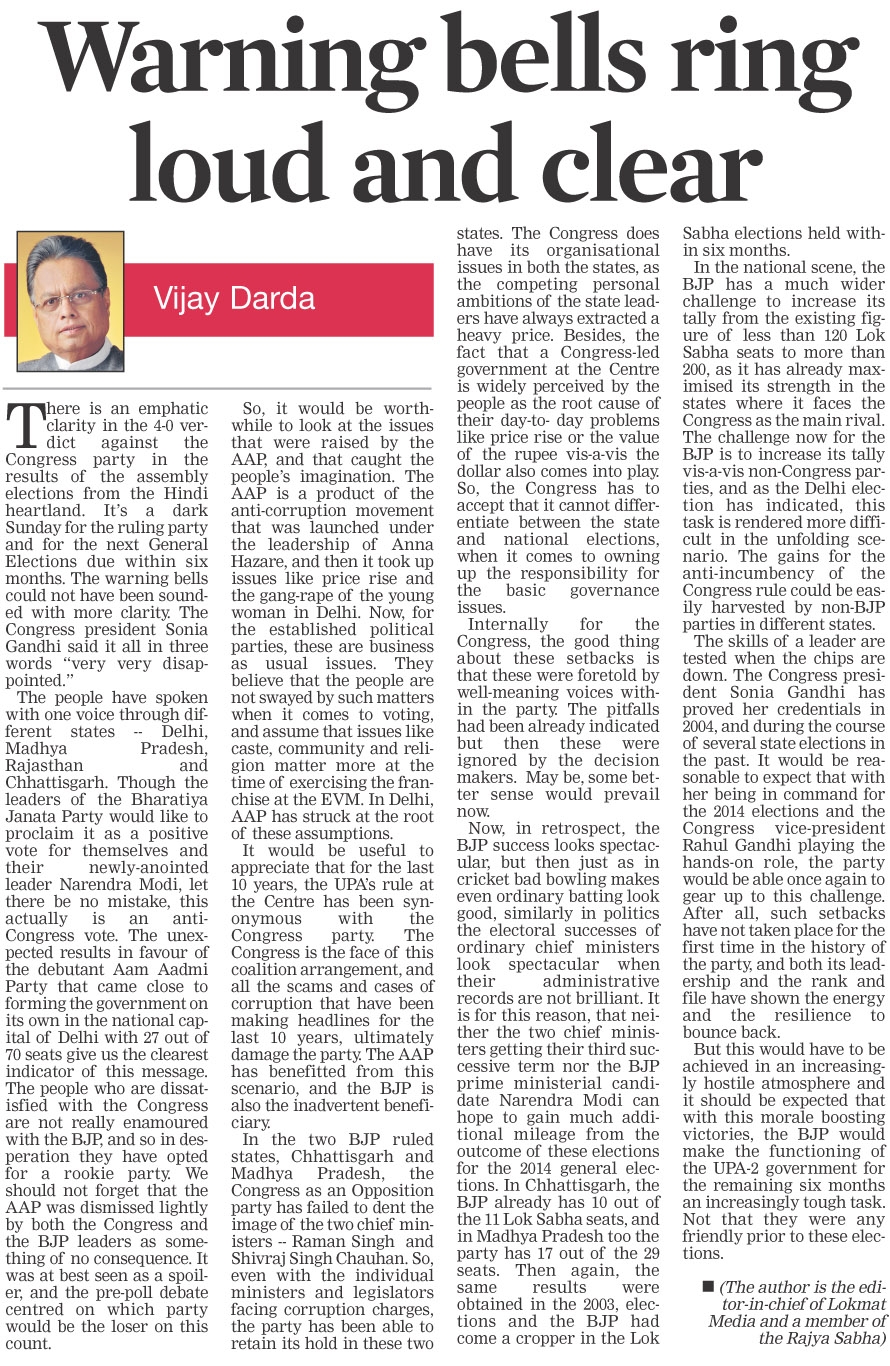 With Kanhaiya, ‘Azaadi’ gets a new meaning