May the festival of colours be a celebration of harmony!

The coronavirus is playing havoc all over the world, making us all jittery. Amidst this atmosphere of fear and worry, we will all be celebrating the most beloved festival, Holi, tomorrow! Holi is the festival of colours. It is a festival of sprinkling colours to cheer up. Given the fear factor in the air due to the outbreak of coronavirus, the question inevitably pops up in the mind as to what one should do? I think we all just need to be on the alert. And yes, celebration is that which springs from within us. It is not necessary that we indulge in chemical colours or apply it to others. What can be more better than a dry Holi?

And yes, Holi has come at a time when the Delhi riots have already troubled all of us. The riots have aggrieved our souls. Therefore, it is important that we use this Holi to make everyone drench with colours of love and affection. Holi is not just a festival of colours, but also a representative festival of our social harmony, brotherhood and deep rooted culture. This is our cultural heritage. It is a festival to eradicate social discrimination. Holi is the day when caste and religion vanish into thin air. The new era poet Sanjay Verma ‘Drishti’ rightly says:

The timeless tradition of India has taught us that on Holi, even enemies need to embrace each other, forget all their grievances and become friends. So this means the deeper the colour of friendship, the more differences will be destroyed. There are many stories about the tradition of celebrating Holi, but I feel that this festival must have been designed to drench the society with the colours of love and affection. This is an ancient festival, but even today we celebrate it with gaiety as it is based on human beings’ love for colours.

Holi was celebrated even by the Aryans. Holi is chronicled in the ancient scripts and texts of Narada Purana and Bhavishya Purana. Holi also finds a mention in the travelogue of the famous Muslim traveller Al-Biruni. It was the miracle of colours of Holi that the festival remained colourful even during the Mughal era. The story of Akbar’s Holi with Jodha Bai and Jahangir playing Holi with Noor Jahan is also recorded in history. Holi was called Eid-e-Gulabi and Aab-e-Pashi (shower of colours) during Shah Jahan era. The last Mughal emperor Bahadur Shah Zafar used to be daubed with colours by his ministers on the occasion of Holi. I am referring to history here to stress the fact that we all know and understand how much Holi has contributed to the promotion of brotherhood and harmony.

Even Muslim poets and lyricists have written a lot of compositions about Holi. There is hardly any Indian who is not aware of this composition of Nazir Akbarabadi:

This composition of Nazir Akbarabadi is about 250 years old. Similarly, the lyrics of Nazi Banarasi on Holi some eighty years ago is no less amazing:

So, wish you all a very Happy Holi! Stay healthy, stay happy! 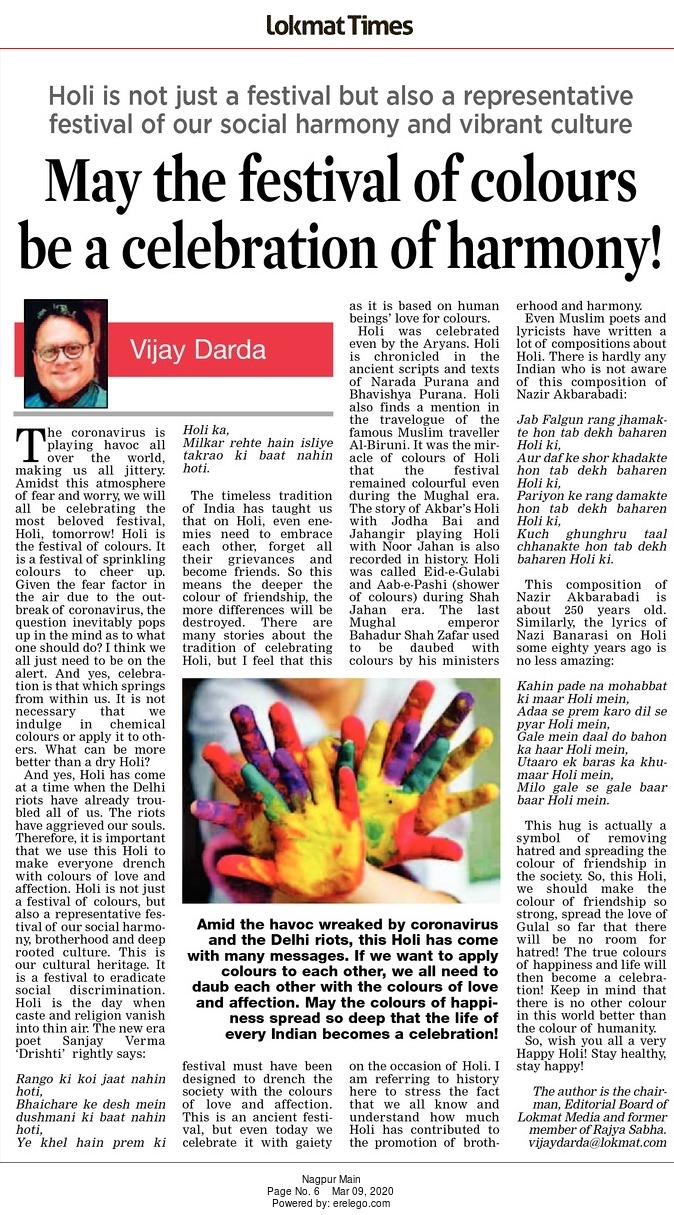 Let us create a new symphony of harmony