After the Gujarat chief minister Narendra Modi went on a three-day sadhbhavna fast for the ostensible purpose of demonstrating his goodwill towards the minority community, we can safely say that at least as a matter of public policy there is no politician who wants to preach any discriminatory treatment towards people based on religion. So my next question is: If everyone is equal and there is no discrimination on the basis of religion, then why is the BJP or the RSS opposing the proposed communal violence bill tooth and nail? Why are they using such words as ‘draconian’ in the context of this proposed law? Why are they shying away from creating a law that will ensure tough punishment for public officers involved in acts of omission and commission during such instances of communal violence? Why are they opposing a provision that treats the victims with much more respect and consideration than the current law?

Let us face it – communal violence is the ugly face of our society that keeps on popping-up with sickening regularity. Our people undergo a brutal transformation during these phases of mob violence, and unleash their dark side on the hapless victims. It is true that sanity does return, but then no one can deny that these phases keep recurring. Even the tallest of the Sangh Parivar politicians like the then prime minister Atal Behari Vajpayee had described the post-Godhra Gujarat communal riots as a blot. There have been other such instances like Kandhamal in Orissa or the killing of the Staines where the communal venom was seen in full flow.

We can also not ignore the reality that those responsible for such acts of violence get away without any punishment or very lightly. In fact, the ordeal through which the IPS officer Sanjiv Bhatt is going through these days only highlights the obstacles that have to be crossed by an officer who wants to diligently discharge his duties. The system as it stands today has failed to deter the communal rioters, and the officials who abet these acts of violence by their deeds of omission and commission. It is because of these experiences and the need to provide a better and safer environment for everyone that the Congress president Sonia Gandhi had asked the National Advisory Council to come up with a draft for the communal violence bill.

The bill is still in the draft stage at the NAC, and there are still many steps to be covered, but judging by the hyper-sensitive reactions of the BJP and its spokespersons, it would appear that some catastrophe has already befallen them. They are fully aware that the draft bill would have to be cleared by the cabinet first, before it is tabled in Parliament, and even then it would have to go to the standing committee, before it finally comes up for discussion in Parliament. But with a mindset that gives away guilt, they are crying wolf.

The reason is not far to seek. The bill aims at eliminating the market value of their chief commodity in the business of attracting votes. The main differentiating appeal of the BJP has been its communal calling card. They may call it by any name, something as lofty as emotional nationalism, or aggressive patriotism, but the bottom line is clear to everyone. As Narendra Modi puts it very eloquently in his election campaign, when you vote against him, you gladden the hearts of the supporters of Mian Musharraf. The same advice is distilled to Modi, by the ‘Hindu Hridaya Samrat’ Balasaheb Thackeray – do not make the Hindus drink the poison of secularism, and maintain your independent streak of Hindutva. This attitude is a part of their mindset. In a less virulent form, it is reflected in Modi’s refusal to accept the traditional skull cap from a maulvi, and in its worst manifestations we have a long list of communal riots.

I am reproducing the key features of this bill alongside this article, and I really find it difficult to disagree with any of the main proposals. Though, I would always accept that any piece of legislation in the making can benefit from suggestions and improvements. But I find no reason to either oppose the major contents of the bill or question the very need to get it enacted.

We never tire of taking pride in our diversity, and use very evocative phrases to describe it. But this diversity cannot be sustained merely by lip service. We have to put in place robust mechanisms that enrich it, and also produce the confidence among the vulnerable sections of the society that they are well protected against any onslaught.

By holding the mobs responsible, by making the officials responsible, and putting a heavy price on any act of violence, the proposed communal violence bill takes a major step forward in creating this environment. It deserves to be supported, and should not be merely shouted down, by those who have a track record of disturbing the communal harmony of our society with the ulterior motive of securing political gains.

According to the draft bill prepared by the National Advisory Council (NAC), the legislation is intended to enhance state accountability and correct discriminatory exercise of state powers in the context of identity-based violence.

The explanatory note on Prevention of Communal and Targeted violence (Access to Justice and Reparations) Bill, 2011, prepared by NAC, lists its key provisions:

Dereliction of duty by public servants:

The bill recognizes offences of both omission and commission. Public servants who act or omit to exercise authority vested in them under law and fail to protect or prevent offences or act with malafide and prejudice shall be guilty of dereliction of duty with penal consequences.

The provisions of this Bill will apply only when it is first established that the offence was ‘targeted’ in nature. Offences under the Indian Penal Code shall be considered offences under this bill when they meet the definition of ‘targeted’.

The bill seeks to ensure that the power of holding command over the actions of others is indeed upheld as a sacred duty, and that there is culpability for those who are ‘effectively in-charge’. The chain of command responsibility may extend to any level where effective decisions to act or not act are taken.

Sanction for prosecution of public servants:

The bill proposes that if there is no response to a request for sanction for prosecution within 30 days from the date of the application to the concerned government, sanction to prosecute will be deemed granted. In relation to certain offences under the Indian Penal Code, 1860, when committed by a public servant, the requirement of obtaining sanction is being dispensed with.

Monitoring and grievance redressal shall be the responsibility of the National Authority for Communal Harmony, Justice and Reparation (NACHJR) and corresponding State Authorities for Communal Harmony, Justice and Reparations (SACHJR). The monitoring mechanism of national and state authorities will also provide the ‘paper trail’ to ensure robust accountability of public officials in a court of law.

The bill proposes that NACHJR will have seven members of which four must belong either to a linguistic minority or religious minority in any state or to the SCs or STs. No more than two members of the NACHJR may be retired public servants.

Offences of communal and targeted violence:

The Indian Penal Code (IPC) contains most offences committed during episodes of communal and targeted violence. These have been appended in a schedule to the bill and shall be considered offences when they meet the threshold of being ‘knowingly directed against any person by virtue of membership of a group’. The brutal forms of sexual assault (beyond the limited IPC definition of rape) and torture have been included in the bill. Additionally, it defines hate propaganda.

This bill seeks to strengthen the rights of the victim in the criminal justice system, through certain provisions in their struggle for justice.

Relief and Reparation including compensation:

All affected persons, whether or not they belong to non-dominant groups in a state have been given justiciable rights to immediate relief, and comprehensive reparations, including compensation if they suffer any harm as a result of any offence of communal and targeted violence recorded under this Bill. No compensation for death shall be less than Rs. 15 lakh. No compensation for rape shall be less than Rs. 5 lakh. The federal principle: Advisories and recommendations of NAJCHR are not binding on state governments. All powers and duties of investigation, prosecution, and trial remain with the state governments. 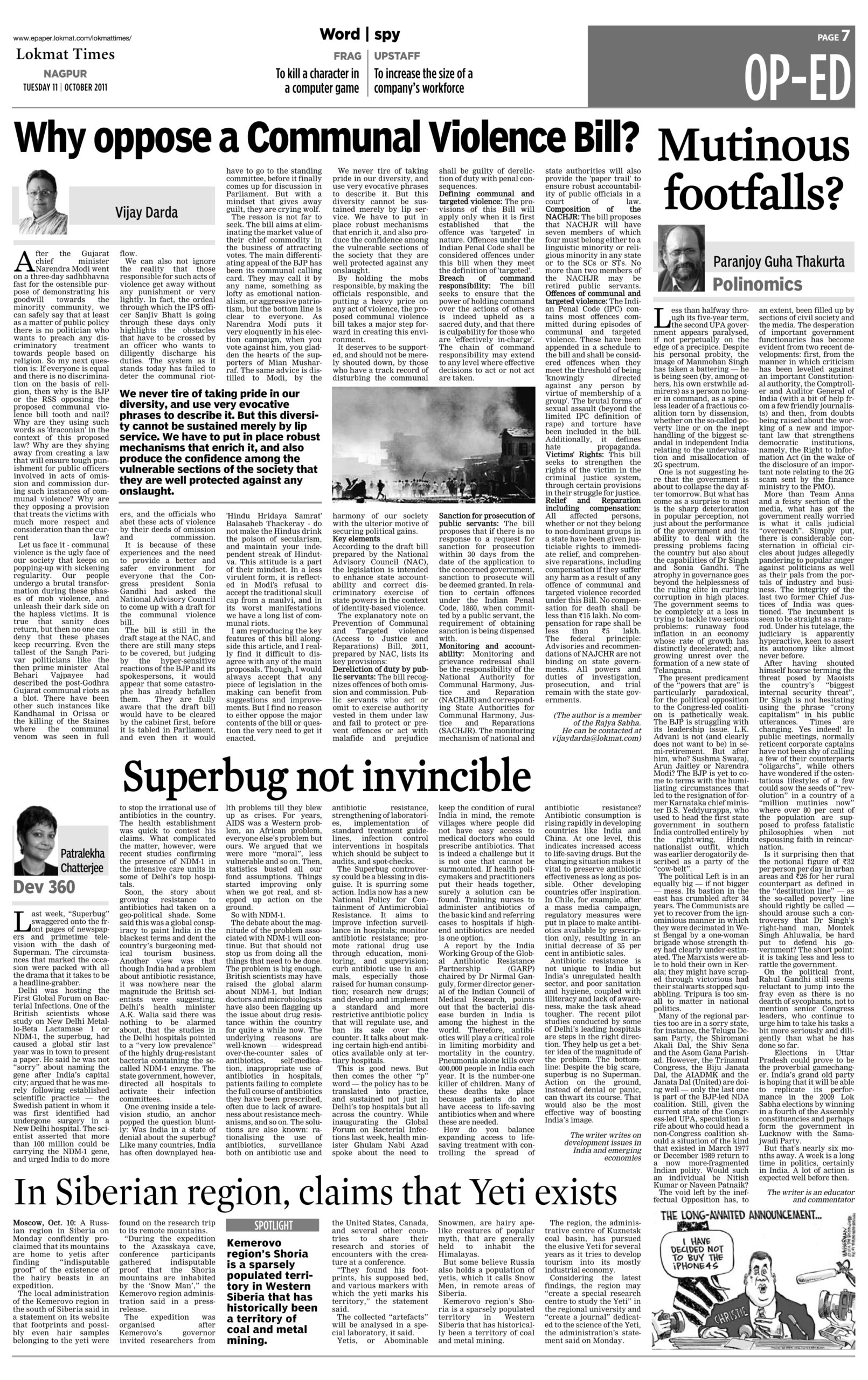