No friends around, children falling prey to loneliness

Corona is filling the children’s world with severe depression and I am afraid it may well lead to psychological problems among children!

The ongoing power struggle in Maharashtra, the furore in the police department, the Naxalite rampage in Chhattisgarh, people in West Bengal and other states turning out in massive numbers at election meetings and rallies sans masks and without observing a safe distance, a scary spike in coronavirus cases, accusations and counter accusations over shortage of medicines and vaccine and the struggle of the entrepreneurs and businessmen to save their existence! Brushing aside all these important issues, this time I have decided to write this column for the captains of the future, children and teenagers that is. For, the younger generation, especially the students, are under severe stress at the moment. This tension is so deep that, I am afraid, it may well create widespread psychological problems!

I am seriously worried about the future. The situation created by the corona pandemic is going from bad to worse. Today, even the tiny tots studying in the kindergarten are compelled to study online. An ophthalmologist told me that online studies will not yield any meaningful result. On the other hand, it will have a worse effect on the eyes of the children. They will contract screen disease. The screen addiction will be so intense that their world will revolve around the mobile and computer, the screen that is. Actually, they are drifting apart from the activities that they should engage themselves in at this age.

Of late, I held several rounds of discussion with several psychologists from home and abroad about the side effects on children. A psychologist told me that children are not able to meet each other physically. They are not able to hold each other’s hands. It is obvious that touch has its own language; there is a message of affection and love, there is a lesson of harmony, there is the joy of mixing and meeting, which makes children cheerful. Naturally, when there is no touch, all these emotions disappear.

Education is being imparted online but children are being deprived of the pleasure of meeting each other. Psychologists say that if this situation persists, the depression in children will set in and increase further. A parent told a psychologist that while living alone in the corona era, his child has become so self-centred that now when he gets an opportunity to meet other children, he shows no enthusiasm at all. Now he has befriended his computer and mobile at home. He avoids meeting other children. After hearing what this psychologist said, I was reminded of the story of a child from South Korea who was so lonely that he stopped associating with children of his age. Later, he had to be treated so that he could become normal. This is to say that the level of stress in children has increased so much that their mental and physical development is being adversely affected.

In the corona era, there is no regular schooling on one hand and on the other, the stress of examinations has continued to trouble them. Parents wanted the children to appear for the examinations, but the government promoted the students from I to VIII and IX and XI to the next class. But before that, the education department too exerted a lot of pressure on these children. Now, the examinations of children of X and XII standards of the State Board are yet to be conducted.

The Board itself appears to be confused on the mode of the exams. Sometimes it says there will be an online exam and sometimes it says there will be an offline exam! Sometimes it says practicals will be conducted and sometimes it says practicals will not be conducted! The question is that if the children are not able to complete their studies, how will they take the exam? In Maharashtra alone, about 30 lakh students appear for the X and XII standard exams. After all, what is the rationale for keeping so many children under stress? This attitude of the education department is not right. Why so much confusion? This only causes stress among children!

By the way, our entire education system stresses children. A report of the ministry of human resource development says the school children in the age group of 11 to 17 years are suffering from severe stress, which is affecting their mental health. I remember that in 1993, a committee was formed under the chairmanship of noted scientist Dr Yash Pal on how to liberate children from the burden of heavy baggage, but the situation did not change much. Yes, the Delhi government has taken a strong initiative in recent years. Happy classes are going on in schools in Delhi. Children study while playing sports. I am of the opinion that such ‘Happy Classes’ should be started all over the country… And it is very important to change the marking system.

Everyone accepts that scoring the highest marks in an examination does not necessarily mean that the child is the best. It has been found that even those children who have stayed away from the race of marks have become more successful in life. But the competition to score more marks has been created in the society and it has made the children stressful. Sometimes they are so stressed that they even commit suicide. According to the National Crime Records Bureau, between 2011 and 2018, about 70,000 students ended their lives due to low scores and fear of exam results. About 50 per cent of these incidents took place at the school level.

I would like to draw your attention towards another figure. The report of the ministry of human resource development says that while 6.9 per cent children have been found to have mental problems in the villages, this figure is about 13.5 per cent in the cities. We all have to understand that scoring more marks alone is not the purpose of life! Besides, we need to shape our education system in a manner that our students do not become victims of stress! 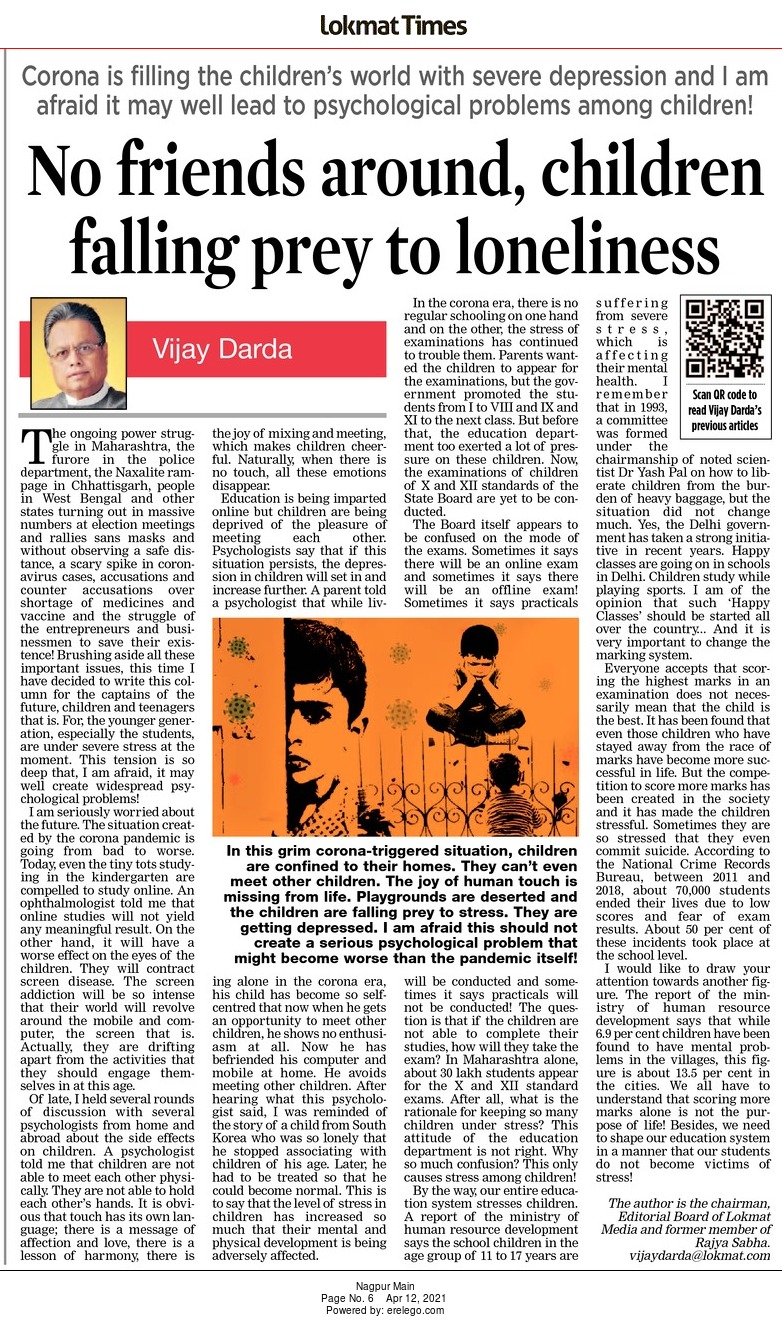 Govt has destroyed its own schools!