The Ganesh festival brings a new energy every year. It is not only a festival of devotion but is also the symbol of social harmony. This is the reason why Ganesh idols are installed at every household. The joyous shouts of ‘Ganpati Bappa’ continue to resonate throughout the 10 days of the festival. Devotees also worship as per their depth of reverence and financial strength and seek the blessings of Ganeshji. My only wish is that the whole country becomes happy, the society becomes full of pious ideas, everyone should get work, no one should die of hunger and none should succumb for want of medical treatment. There should be harmony in the society and let there be brotherhood. Let’s all celebrate Ganeshotsav together and call out with love – ‘Ganapati Bappa Morya..!’

Let there be a shower of affection in which ego drowns and the walls of differences collapse. Let anger melt away. Hatred should be buried forever and ‘I’ be replaced with ‘we’.

I also have a wish that the democracy of this country flourishes. But when I see the condition of the main Opposition party Congress, there are apprehensions in my mind. How will a democracy flourish without Opposition? That is why I am making a humble request to Lord Ganesh to give this old political party of the country much needed intelligence to find a way out of its present plight. May Lord give it the power so that it can think about standing in the political arena again. Congress is not only a political party but an idea; it is the soul of the country. Just as the soul does not die, the thoughts do not die too. Once, the common man of this country had faith only in Congress. The party had its roots in every village. Wearing Congress’ cap was considered a matter of pride, but now there is no trace of the cap. In other words, the leaders of Congress became so engrossed in denigrating each other in their own party that they forgot the fact that the time was changing. Before anyone could realise, the party became emasculated and ill.

Now just look at the condition in Maharashtra itself! Election dates have not been announced, but state chief minister Devendra Fadnavis has released the ‘horse of Ashwamedha’ in a triumphant manner. He has already announced that his government is coming back to power again. The ‘Maha Janadesh Yatra’ is pulling the crowds and they don’t have to gather the crowds as the people themselves are turning out in large numbers. I am not even talking about the BJP. I am only talking about Devendra Fadnavis, who is single-handedly touring the length and breadth of the state as its helmsman. He has also maintained alliance with the Shiv Sena with great solicitude and friendship. He knows how to achieve power, and take people into confidence.

He knows how to get into the hearts of the people, so if he says that he is returning to power, there is no bravado in it. He is exuding confidence about returning to power. Shiv Sena has also strengthened itself. Aditya Thackeray has started emerging as the star leader of his party. People are getting attracted towards him. This ensured that Uddhav Thackeray did not have to exert himself and hit the streets. In terms of power, I see a contest between BJP and Shiv Sena.

On the contrary, when I look at the Congress, I feel depressed. I don’t understand why the party has become dormant. Where are the leaders of Congress? Don’t Congress leaders ever think of how to rein in the galloping horse of BJP’s Ashwamedha? They lack passion. I can state categorically that the Congress has never been so weak as it appears today. If there is no enthusiasm among the senior leaders of the party, where will the enthusiasm in the workers come from? I am feeling terribly worried while writing this, but the truth is that there is a lack of understanding within the Congress. That is why I am urging Lord Ganesh that he should grant wisdom to the Congress party, confer it with the power of ideas, the power to understand the country afresh so that the Congress rises again in not only Maharashtra but the whole country. So that people start believing in Congress again!

I am not only looking at the weakness of the Congress from the perspective of the party but also from the perspective of the need of the country. Pandit Jawaharlal Nehru used to say that strong opposition is very important for democracy. That is why he used to respect people like Ram Manohar Lohia, Madhu Limaye and Atal Bihari Vajpayee wholeheartedly. He considered the voices of criticism as a medium of ideological well-being. Today the situation has reversed. That is why the role of Congress in strengthening democracy can prove to be crucial. Apart from Congress, no other party has the power to play the role of a meaningful alternative. So, you also pray to Lord Ganesh for the Congress. Celebrate the Ganesh festival with great pomp and gaiety and strengthen social harmony. Many congratulations to you and your entire family for Ganeshotsav.

The ‘Paryushan Parva’ of the Jain community is nearing conclusion. During this very holy period, forgiveness is sought from 84 lakh creatures through spiritual practice. I too apologise to all of you on this occasion. If I have inadvertently committed any mistake and hurt your feelings, then I am sorry. I seek your forgiveness from the bottom of my heart. There is no greater weapon than forgiveness.

From today, the Mahaparva of Shri Ganeshji is beginning. I fervently urge the Lord of Wisdom to give power to the country’s oldest party Congress to think so that it can gain in strength, be able to overcome its current predicament and once again become strong enough to stand in the political arena again! 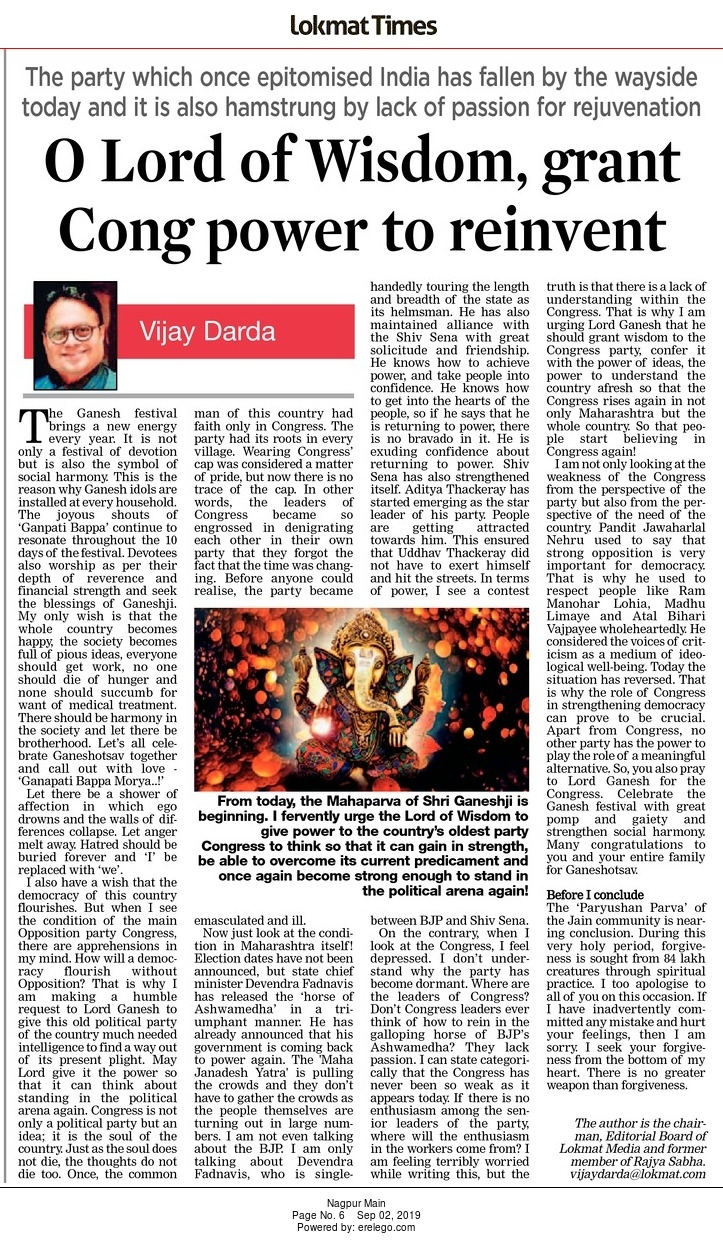 We need to imbibe the virtues of Lord Ganesh

The ‘Her’ Ganapati, society and wisdom

Mountain of expectations in the sea of challenges