We all know that in India cricket is a religion. The fan following for this game cuts across all barriers and unites us with the same must win spirit that binds devotees of a religion. For 24 years one man Sachin Ramesh Tendulkar has been the presiding deity of this religion. He has been talked about in superlative terms when it comes to his cricketing achievements, and as he announced his decision to bid a good bye to the game after playing his 200th Test match, his cricketing feats have once again come under an intense scrutiny.

These shall be discussed and debated at length. Cricketing pundits and ordinary fans shall have emotional arguments about various aspects of his game, and as the game’s statistical aspects lend themselves to a detailed analysis there would be no dearth of animated debate in the public domain.

However, we all know that Sachin has been an intensely private person and till recently was very reticent in talking about himself or things associated with him. But then even before he became a fellow parliamentarian in the Rajya Sabha, I always enjoyed discussing non-cricketing matters with him, during the various encounters I had with him over the years.

The most impressive thing about him is his work ethic and the value system that he brings into his life. We all know as to how even the smallest of successes turns people arrogant and then changes their behaviour and attitude towards others. For 24 years, he has been an astounding success and has still remained the same human being.

Sachin is a Mumbai boy. There is a lot of talk of the Marathi identity in Mumbai, and it would have been very easy for someone in his position to get carried away by the pressures of the high decibel campaign that goes on for the assertion of this identity. Yet, Sachin has retained his poise and a sense of balance. As a truly national icon, he has asserted the essence of Indianness even at the risk of earning the displeasure of someone as strong as the late Balasaheb Thackeray. This does not in any way diminish his fervour for the Marathi language but only goes to show that he has sense of priorities right.

I remember that he faced a lot of criticism when he accepted the membership of the parliament. He was also targeted for not remaining present in the parliament. But then he accepted this as a mark of honour, and sign of regard that the country has for him. It was actually a reward for the consistent contribution he has made to the game and because of which the nation has gained in terms of sporting prestige. No one expects him to make speeches in the parliament like politicians. But we can be sure of one thing, that once he gets the time now he shall certainly make a contribution. This is actually the essence of this man-god. Whenever he is there there is an expectation that he shall contribute and he does not let his team down.

For several persons separated by generations that have engaged with the game of cricket, with Sachin not being a part of the Indian team, the game would not remain the same experience. Interestingly, the reasons are both cricketing and non-cricketing. With Sachin on the field, even the relatively minor fact that he had fielded a ball and sent in an exact throw used to excite his millions of loyal followers. There are millions of people who used to pray or be superstitious about small matters when he was on the crease. Now, for both the reasons, they would not be engaged with the game of cricket. But there was also an element of purity with the game that has been lost after the advent of the IPL. Indeed much before the current round of betting scandals afflicted the game, Sachin’s own lack of interest was evident as he simply smiled away at my questions on these issues. I do understand that as a major cricketing brand he had to be a part of the show, but that was about all.

Sportspersons and commentators have often wondered about his commitment to the game and his such long enduring capacity to motivate himself and perform at the global stage despite advancing years. To my mind there is not much of a mystery around this phenomena, if we keep in mind that the 40-year-old Sachin had the same love for the game that the teenager Sachin had. If we remember that children never tire of playing and it is only adults who get “sick and tired” playing, we unlock the key for his enthusiasm for the game.

He has always said that all his life he has done nothing else except playing cricket, so as he calls it a day the question is bound to surface as to what next? Sportspersons become commentators or administrators, but I do not see any such easy route for him. He has been a quality performer and a consistent one at that. So, it would be unrealistic for him to follow this well-trodden path.

Indeed, he is an iconic and inspirational figure for the entire nation. He already has a place in the parliament, and he is known to be a focused performer. It could be reasonable to expect that he charts out a fresh career path that is at once iconic and inspirational, and allows his natural powers of concentration to work for the achievement of some better goals. He has not revealed his post retirement plans, but then these should also be as rewarding as his impressive stats on the cricket field. 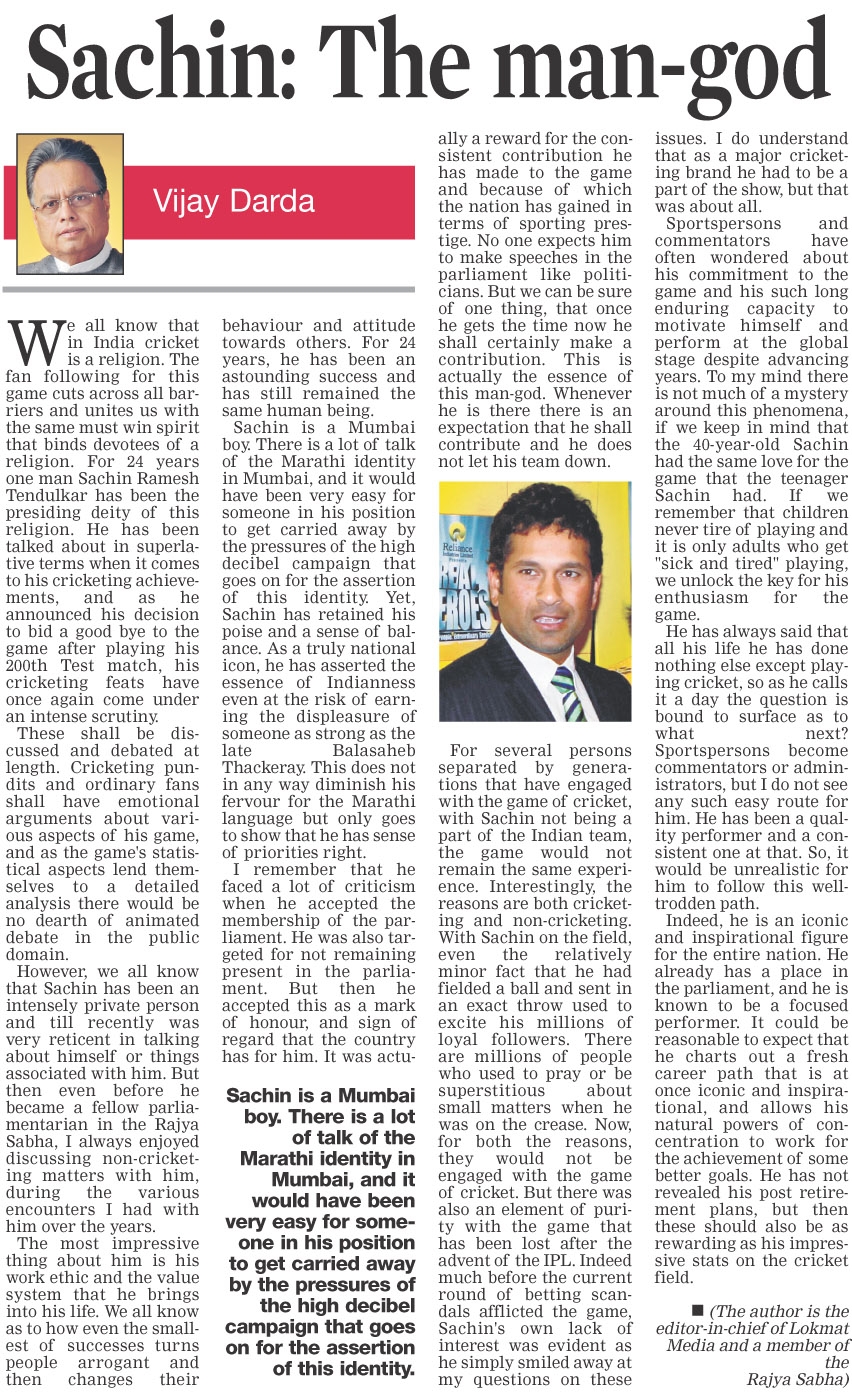