We had the last session of the 15th Lok Sabha this week, and now we are getting ready for another General Election to create the 16th one. When I say that it a testing time for our democracy, then I am using a mere regular cliché. From my experience as a parliamentarian, I can certainly say that the functioning of this Lok Sabha, and along with it the Rajya Sabha over the last five years is certainly not the way for a big matured nation like ours to run a democracy. This Lok Sabha has been the most disrupted, and the most dysfunctional so far. It was thrown out of gear, many a times at the drop of the proverbial hat. Then even when the House assembled, the chaos was unbelievable. A large part of the chaos, was due to the way in which the House was constituted. Instead of reflecting a national consensus, it echoed a fragmented polity. Can we repair that and come up with something better? This is the test that awaits our electorate.

I am aware that the Prime Minister Dr Manmohan Singh in his farewell remarks praised the passage of the Telangana Bill as an indication of our national capacity to take difficult decisions. He said: “The manner in which the state of Telangana is being born is yet another indication that this country is capable of taking some of the most difficult decisions without any rancour, without worrying too much about the pros and cons of things that do not matter…”. But then the virtual war-like situation in the Lok Sabha during the course of the passage of this Bill makes one shudder about the safety of our parliamentary system. No less a person than the Union home minister Sushilkumar Shinde, who is also the leader of the House, has made a mention of the scare they used to feel when the protesting members were getting physical in the course of their opposition to the bill.

This is not to gloss over some of the major legislative achievements of this Lok Sabha. Without doubt the passage of the Andhra Pradesh Reorganisation Bill that carves out the separate state of Telangana is a historic milestone. It brings to an end the more than six-decade-long dispute between the two regions. Above all else, it accepts the principle that there can be more than one linguistic state for one regional language. It gives rise to a legitimate hope that if there can be two Telugu speaking states, then the demand for having more than one Marathi speaking state or that of any other regional language should also be accepted. Now, it is just a matter of time. The broader principle has been nationally recognised. Indeed, the time constraints that got imposed due to the unparliamentary chaos during the passage of the Bill in the Rajya Sabha took its own toll. The kind of exhaustive discussion that has usually preceded the enactment of such legislations did not take place. One of the fallouts was that to my regret I could not make a speech that would have reflected the sentiments on the long standing discrimination against the region of Vidarbha.

The parallel between the Telangana and Vidarbha regions has a historic background. It has been drawn often and is well-known, and would have become a part of the parliamentary record as well. But the larger point that I wish to drive home is that when the House does not function in the way it should then there is a great loss of opportunity for transacting regular legislative business. We talk of all kinds of losses to the national exchequer, and the loss in terms of the parliamentary time is often converted into rupees, but no one computes the opportunity cost of the legislations not enacted.

It is not just the Telangana Bill pursued very determinedly by the Congress president Sonia Gandhi amidst difficult conditions. There is the Food Security Bill, the Land Acquisition Bill, the Whistleblowers’ Bill, the Lokpal, and the rights based architecture for education, the street vendors, the scavengers, and Bill for protection of women that came in the wake of gang rape that rattled the soul of nation. In particular, the whistleblowers’ law is a matter of great satisfaction for me as I had pursued this as a private members legislation, and had a commitment from the government on it. My point is that if we could achieve so much even in this chaos, then as parliamentarians we have let down the nation by not conducting ourselves in a dignified manner and giving the people their due. In words of a retiring CPI member Gurudas Dasgupta, the parliament is not a boxing ring, and we seem to have forgotten this fact. This is a collective failure.

Personally, I had a more than a satisfying moment when a book on my three terms in the House , “Public Issues Before Parliament – Vijay Darda” , was released by the Vice-President and Rajya Sabha chairman Hamid Ansari who eloquently articulated the ‘derailment’ of the parliament. Other speakers who included long standing friends and colleagues –jurist Fali S Nariman, ministers Farooq Abdullah, Praful Patel, CPM leader Sitaram Yechury also expressed similar concerns and also pinned their hopes on the future.

Learned men have advised that brevity is the soul of wit, and there is nothing in this world that cannot be compressed in a three-minute speech. I have also admired the long speeches of many a parliamentarians and I must add that when the Rajya Sabha does get the chance to debate an issue, it is generally a treat to listen to all the shades. So, does the Lok Sabha reflect the diversity and colours of people when the members get a chance to have their say?. The valedictory references provided a glimpse of this, when the members for once decided to sink the acrimony. But then I wonder, is it such an insurmountable problem to work out norms for decent discussion and disagreement in parliament? Can we never have a situation where we can kill the snake without breaking the stick? 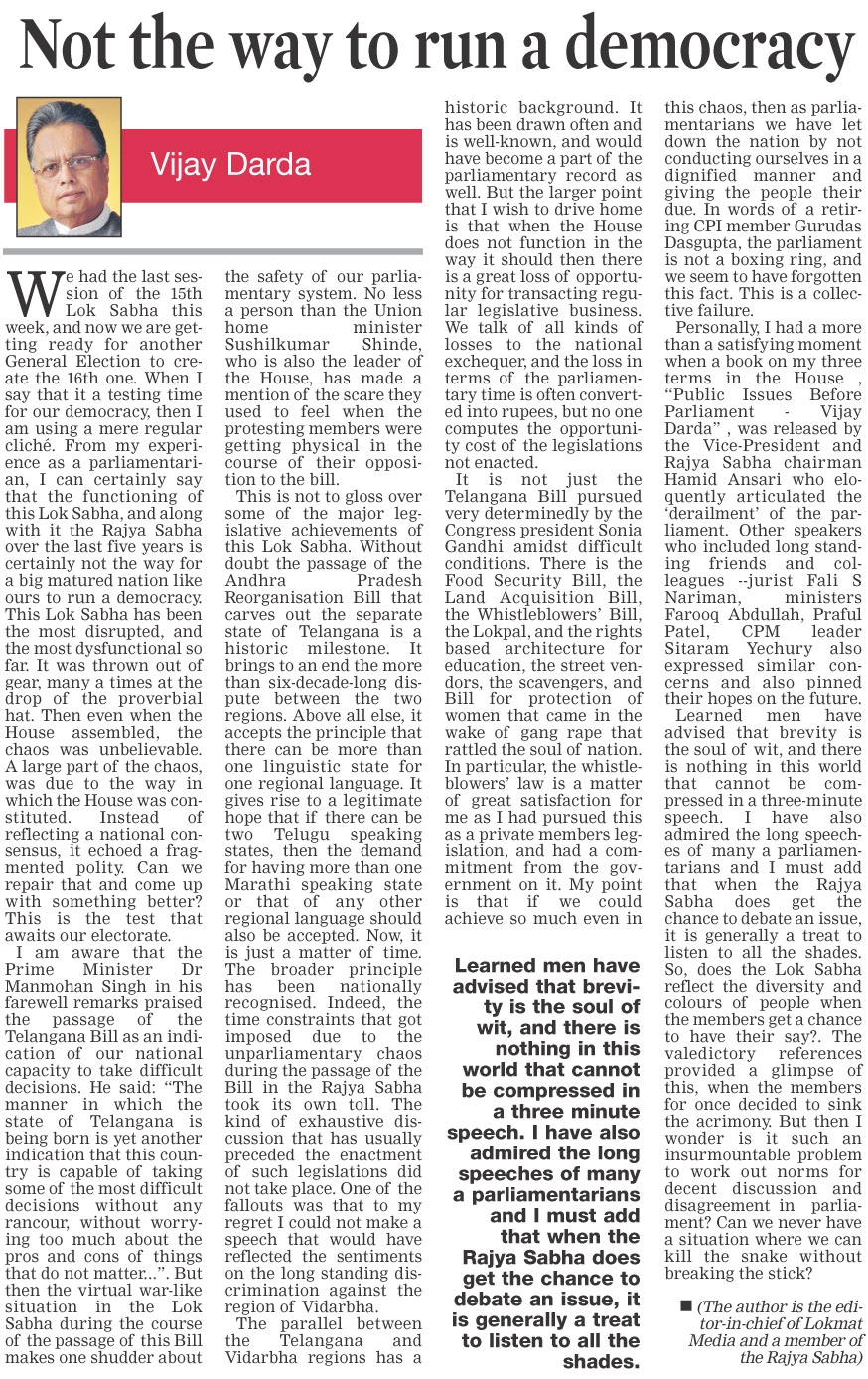