Politics has knocked bottom out of anti-defection law

This greed of grabbing power is a direct attack on paramountcy of elections; the common voters of this country are being led down a garden path

A similar political manoeuvring took place in Karnataka last year. There, 17 MLAs resigned and the Congress-JD(S) government landed in trouble. Then, the Karnataka Legislative Assembly had disqualified 14 MLAs. Three had already been disqualified. In this way, the strength of the Karnataka Legislative Assembly was reduced from 225 to 208 and the majority figure was reduced to 105. The matter went to the Supreme Court where the MLAs said they have resigned so how can they be disqualified? But the court said the resignation does not mean that you cannot be disqualified. But the Supreme Court also said that the speaker does not have the powers to cancel the membership of rebel MLAs for the remaining period of the House. This means that rebel MLAs cannot be prevented from contesting elections for the remaining term of the Assembly. Later, when elections were held, many of the rebel MLAs were elected on BJP tickets. It is almost certain to happen in Madhya Pradesh too.

It is obvious that the anti-defection law made in 1985 is no longer of any use in today’s situation. Earlier, in small states like Goa, Manipur, Jharkhand, due to low number of MLAs, there was a flagrant violation of anti-defection law and now bigger states are following the suit and making mockery of this law in other ways. There should be no hesitation in saying that political parties have knocked the bottom out of the anti-defection law in such a way that it is now beyond repair. Its direct impact is felt on the Indian electoral system. People vote to form the government according to their wishes and after the elections it becomes known that someone else has formed the government. We have seen a fresh example of this in Maharashtra. The public chose the alliance of BJP and Shiv Sena, but Shiv Sena formed the government with NCP and Congress. This situation is undesirable and will put an end to the credibility of politicians.

Here it is also important to consider why this happens. In fact, democracy is the best among all forms of government, but there are loopholes in it too. Those who practise politics of selfishness exploit the same. The leader defines his political ideology as per convenience and gives it the name of democracy. It has always been and still is. Jyotiraditya Scindia used to claim to walk shoulder to shoulder with Rahul Gandhi, but now he has moved over to the BJP. Those who got big positions in the Congress went to the BJP and many of the BJP went to the Congress. It is obvious that all this did not happen due to ideologies; those people did what they found convenient and what suited their interests. Now it is difficult to say who is right and who is wrong among them. I think if the waking person pretends to be asleep then it is difficult to wake him up. This is the case in politics these days.

Incidentally, I want to tell you that the expression of ‘Aaya Ram Gaya Ram’ had become very famous in Indian politics between 1967 and 1985. In 1967, a gentleman named Gaya Lal was elected Congress MLA from Hasanpur Assembly constituency in Haryana. Later in the same day, he changed the party three times. He left Congress and joined the Janata Party, then came back to the Congress in a short time. Then after 9 hours, he went to the Janata Party. Later, he again joined the Congress. After that, the trend of political defection kept enlarging.

In 1985, when Rajiv Gandhi came to power with an absolute majority, he enacted an anti-defection law to clean up the cesspool of Indian politics. The 10th schedule was added to the Constitution. This was the 52nd amendment to the Constitution. It was hoped that floor-crossing would end but politics also found a way to neutralise this law. Now the question is how to deal with it? I feel that a law needs to be made afresh. It should envisage that whoever changes the party or resigns under any political situation should be debarred from contesting elections for five years. Political manoeuvre and power-grabbing game cannot be stopped until and unless we have any concrete system like this. Political parties will have to stop such manoeuvring.

The political drama in Madhya Pradesh has once again attracted the attention of the country towards the weakness of the anti-defection law. Simply put, politics has knocked the bottom out of this important law, but it is equally true that it is also the responsibility of the polity to plug the loopholes in the system. 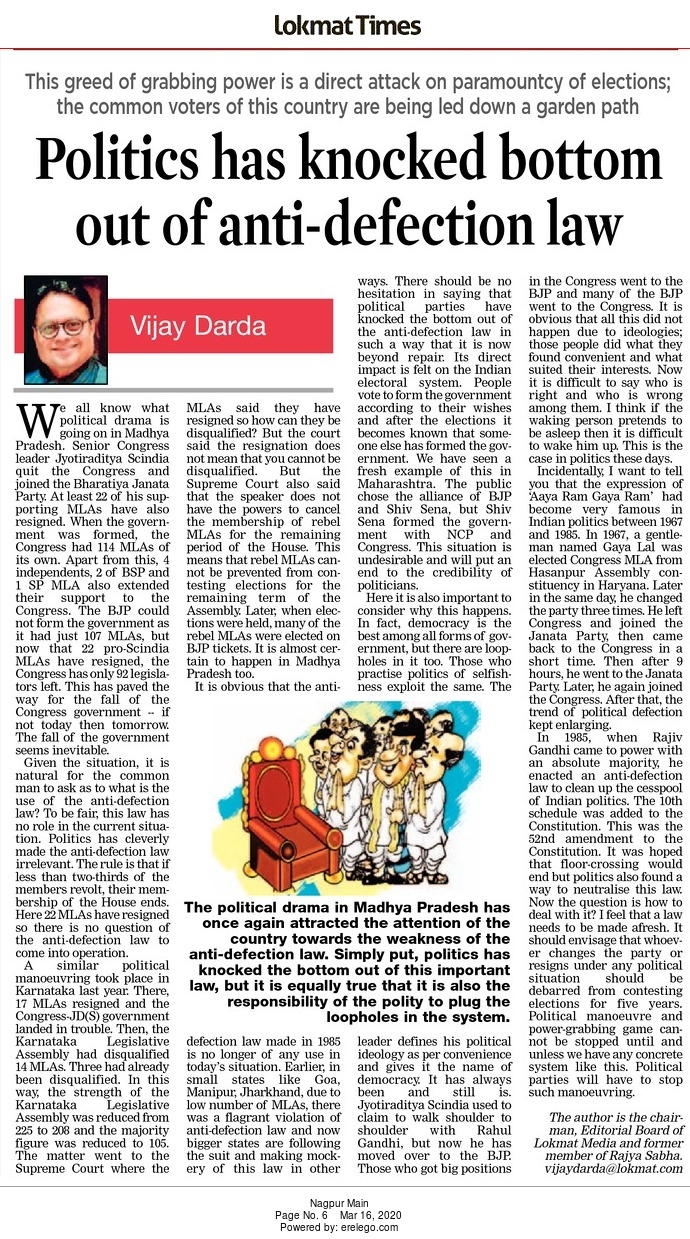 Rahul has emerged as a mature politician

India will have to be more alert against China