On the Unnao rape case, the Chief Justice of India observed: ‘What is going on in this country?’

The Unnao rape case and subsequent happenings are not just a crime story. This story is the story of a shabby system where a domineering MLA is not only accused of rape but he is also accused of destroying the girl’s family. The father was killed. And now there has been an attempt to kill the victim in an accident. The possibility of murder is because the truck driver involved is reported to be close to the MLA. The matter is so serious as to move the Chief Justice of India to remark: “What is happening in this country? Nothing is happening according to the law.”

This tale of woes really makes a hair-raising story. First of all, think about what, when and how it happened! On June 4, 2017, a 17-year-old girl was kidnapped from a village near Unnao. For several days, the police searched for her everywhere but in vain. The girl was eventually found by the police on June 21, 2017, but no case was registered. On June 22, the story she narrated before the magistrate was very painful. But the police developed cold feet when the girl informed that in these 10 days, some people including BJP MLA Kuldeep Singh Sengar had gangraped her.

Had the accused been somebody else, the police would have filed an FIR immediately. But Kuldeep Singh Sengar is a big name in Uttar Pradesh’s politics. He has been associated with many political outfits in the past. In 2002, for the first time, he won the Assembly elections from Unnao Sadar seat on BSP ticket. In the 2007 elections, he joined the Samajwadi Party and won from the Bangarmau seat and in 2012 he won from Bhagwant Nagar. In 2017, he joined the BJP and won Bangarmau Assembly seat.

When his name first appeared in Unnao rape case, the police tried every possible trick to shield the MLA. Nevertheless, the police had to file the case as the girl had recorded her statement before the magistrate. However, when the chargesheet was filed before the court on July 1, 2017, it had no mention of MLA Sengar’s name. When the district court intervened in February 2018, the police added Sengar as an accused, but did not arrest him. Allegations were levelled that the police was trying to shield the MLA.

Meanwhile, another strange incident occurred. Sengar’s brother attacked the girl’s father. However, the police registered a case against the girl’s father under Arms Act and sent him to jail on April 4, 2018. The girl came to know that her father was being tortured in jail. Following this, she attempted self-immolation in front of the chief minister on April 8. Though the police saved the girl, her father died on April 9 inside the jail. Hooliganism continued unabated as the MLA was roaming free.

After the girl’s suicide attempt, the matter was taken up by the national media which highlighted the victimisation of a helpless girl by a powerful political satrap. After this, the CBI started the investigation and on April 13, Sengar was arrested. Surprisingly, Yunus, the main witness in the case, died on August 18, 2018. The victimised girl wrote a letter to the Chief Justice of India on July 12, 2019, that her entire family is in danger but the letter did not reach the CJI immediately. And the girl’s fear came true on July 28. The girl went to Rae Bareli with her paternal aunt, maternal aunt and her lawyer. On their way back, a truck rammed into their car with such a force that both her aunts were killed on the spot, while the lawyer, who was driving, and the girl are battling for life in the hospital. Grease was applied on the number plate of the truck which hit the car and the truck driver is said to be close to Sengar.

And the biggest surprise is that the three policemen who were deployed to protect the girl, were not escorting her on the fateful day! Doesn’t it look like conspiracy? It definitely reeks of conspiracy. Meanwhile, the Supreme Court has transferred the case from UP to Delhi and directed the trial court to complete hearing within 45 days. Let us hope that the culprits will be punished soon, but this issue does not end here. The question is why is our system under the pressure of some tyrants? If the law is same for everyone, the police should also deal with all in the same manner! Unfortunately, this is not happening.

When I am writing about the Unnao incident, it looks like a script of a crime thriller. I am surprised how a politically powerful legislator can ruin a family and our administrative machinery does not come to its help. I feel it is not a matter connected with a political party, but concerns humanity and the entire system. It concerns a system which is governed by the Constitution wherein safety and security of the citizen is assured. It concerns a system that is under a vigilant Prime Minister Narendra Modi, home minister Amit Shah and chief minister Yogi Adityanath. If such things happen, it is a matter of grave concern for the entire society. That is why the Chief Justice of India is compelled to make harsh remarks. All the political parties will have to think on how the country should be run according to law, no matter how powerful those involved in the matter are.

About two years back, a girl was gangraped in Unnao. After much difficulty, the accused legislator was arrested and sent to jail but not before he destroyed the girl’s family. The Chief Justice of India has rightly said that nothing in this country works according to law! 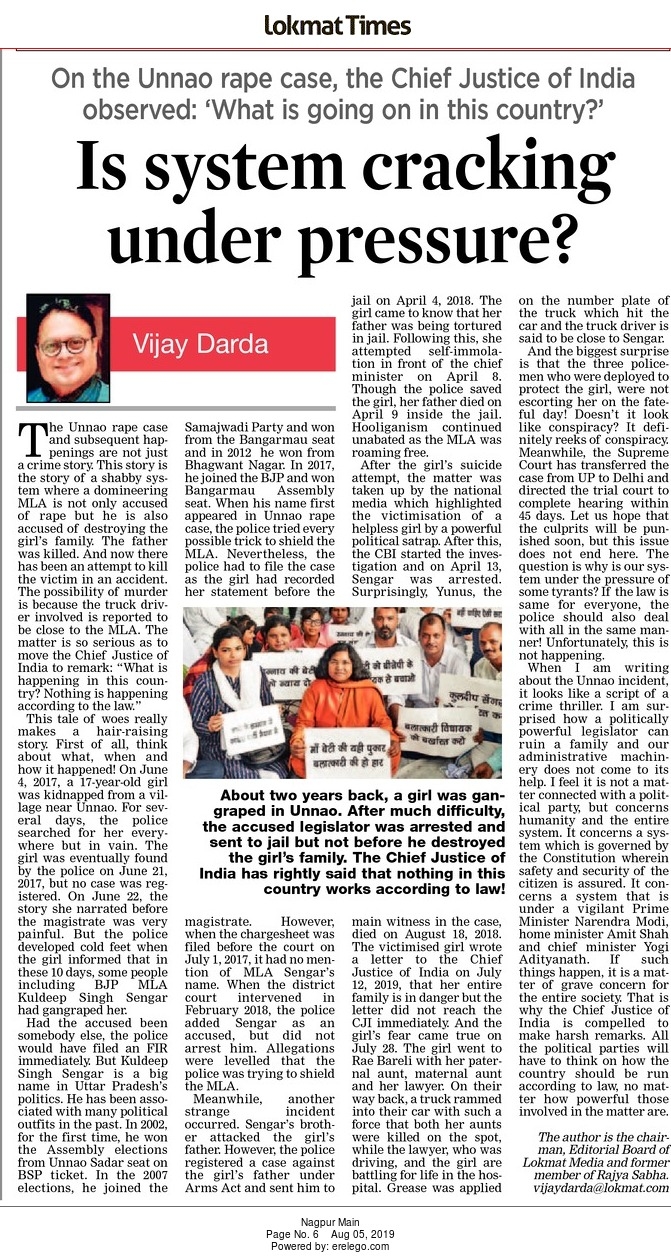 Politics has knocked bottom out of anti-defection law