If we just keep trying to prove Prime Minister Narendra Modi wrong on everything, it will weaken the very existence of the Opposition. The voice of the Opposition will carry weight only if the opposition or protest will be constructive, and not just for the sake of it. Today some people are protesting about the Central Vista project, but they should understand that the first initiative was taken by the then Lok Sabha speaker Meira Kumar during the Congress-led government in 2012 to build a new Parliament building. The leaders of other parties including Atal Bihari Vajpayee had supported it.

Under the Central Vista project, the offices of the Vice President, the Prime Minister as well as all the 51 ministries will be housed under one roof. MPs will have offices. All the buildings will be connected to each other. This will benefit from the security point of view and help get rid of the problems people face during the VIP movement too.

The project will cost about Rs 20,000 crore and Prime Minister Narendra Modi wants to complete most of the important work of this project before the end of his second term in 2024. The rest of the work will be done later.

A section of the society is questioning the need to spend such a huge amount on the project in the midst of this pandemic when the economy is badly hit. People are also questioning the purpose and benefits of this project.

Normally, this logic may sound right, but if you understand things with a deeper perspective, you will understand how important the completion of the Central Vista project is from the administrative point of view keeping in mind the future. I have been a part of the Parliament for 18 years so I have seen and understood the requirements closely. Many of these buildings are dilapidated. It is difficult to work sitting there. The legislative section of India sits in the Parliament House whereas the President, Vice President, Prime Minister and officials of 51 ministries sit at different places. Rashtrapati Bhavan, Parliament House, North Block and South Block, and National Museum building were built in 1931. After that Nirman Bhawan, Shastri Bhawan, Udyog Bhawan, Rail Bhawan and Krishi Bhawan were constructed between 1956 and 1968. Today, 39 ministries are housed in different buildings in the Central Vista area while 12 ministries are occupying rented premises outside.

You will be surprised to know that their annual rent is about Rs 1,000 crore and their distance from the PMO and other ministries is quite long too. Obviously, the administrative work gets hampered. So, is it justified to spend such a huge amount on rent? Just calculate how much rent the government would have paid till now. Around Rs 20,000 crore must have been paid only during the period I was in Parliament.

Another important point is that when the buildings were built in Central Vista and its surrounding areas, there was no digitalization like it is today. Now along with the security of Parliament House and ministries, there is always a big question for the security of digital files. Building a new complex will ensure better security for both.

India is a rising power in the world today. Priorities are changing, so it is very important that the entire Central government should be accommodated in a cluster of buildings equipped with modern technology so that ministers can easily reach out to each other, meet and interact. If 51 ministries located in the buildings being rebuilt in the Central Vista project are near each other, it will definitely benefit from the administrative point of view.

We also have to keep in mind that our population is growing, so surely the number of MPs will have to be increased too in future. Keeping this in mind, the new building of Parliament House will be built on about 65,400 square metres of land and have a large Constitution Hall, a lounge for MPs, a library, offices of several committees, etc. The Lok Sabha chamber will have a seating capacity for 888 members and the Rajya Sabha chamber will have the same for 384 members. Along with this, there will be ample space for the National Museum, National Archives and Indira Gandhi Art Museum and our heritage will also be displayed in a dignified manner.

Those who are critical of this project say that an amount of Rs 20,000 crore should be spent on helping the poor and providing healthcare facilities during the pandemic. But the question is whether the government is executing this project by diverting the funds meant for the poor or the needy? Of course not. The government is not rolling back any welfare scheme meant for the poor. All schemes are running as before. I believe that the poor must be helped and every government has been doing this. The point is we have to plan for the future too.

If we look at the post-independence history, be it Pandit Jawaharlal Nehru, Lal Bahadur Shastri, Indira Gandhi, Rajiv Gandhi, Atal Bihari Vajpayee or any other person who has been in power, everyone has worked on planning for the future and that is why India has occupied this prime position today. If Rajiv Gandhi would not have dreamt of a technology-rich India, had we been where we are today? We must worry about the present. Problems should also be solved, but we should also dream of a better future. The office of our Prime Minister should also be state-of-the-art, equipped and secure like the Parliament and Presidential buildings of America, Russia, Britain and other developed countries. That’s why I want to say that there should be no politics, at least in the case of the Central Vista project. There are several other subjects for politicking. 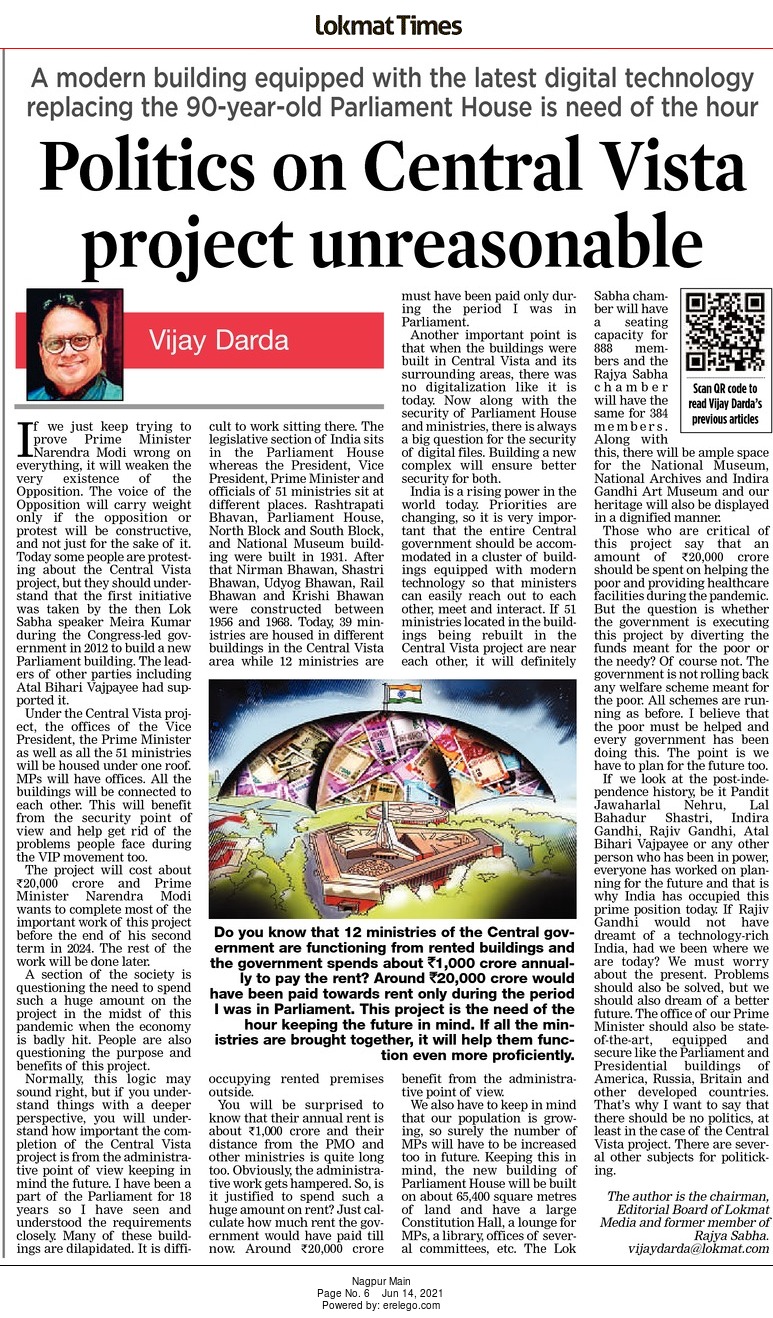